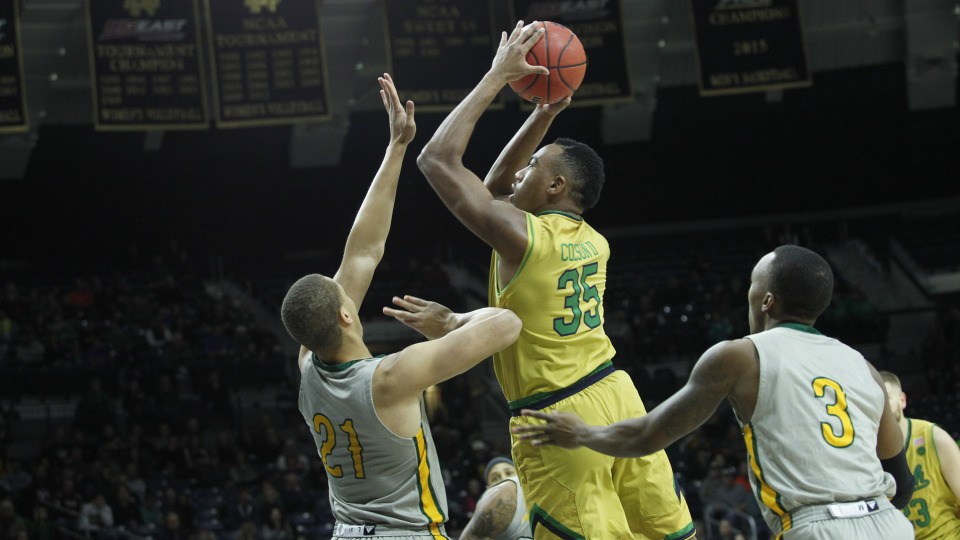 Notre Dame coach Mike Brey hopes to have injured senior forward Bonzie Colson back for the ACC Tournament March 6-10 at Barclays Center. Colson has been out since early January with a left foot fracture suffered in practice. “Realistically if we get him back we’d have him back for Brooklyn,” Brey said Monday on the ACC conference call. “And maybe we’ll have the team we had in Maui ready to go in Brooklyn. “But they’re cautious with this thing and I by no means want to jeopardize his future professionally rushing this young man back.” He added: “He’ll get on the bike a little bit this week but he’ll have the boot on. They’ll do an X-ray probably in early February to check to see the healing. It will not be before eight weeks, and that’s really end of February/ March 1st.” The preseason ACC Player of the Year, Colson was averaging 21.4 points, 10.4 rebounds, 2.4 blocks, and 2.0 steals when he went down. Notre Dame doesn’t play again until Saturday against Virginia Tech and Brey also said he hopes the Irish’s bye week will give guard Matt Farrell (ankle) time to rest up and “get in game shape and feeling better before we play again Saturday.” Brey said Farrell’s ankle was at “about 90 percent.” The Irish (13-7, 3-4 ACC) have dropped four straight — the first two without Farrell. “We haven’t been able to get over the hump the last several but we hope to get over the hump Saturday,” he said. Photo: Notre Dame Athletics   Follow Adam Zagoria on Twitter And like ZAGS on Facebook