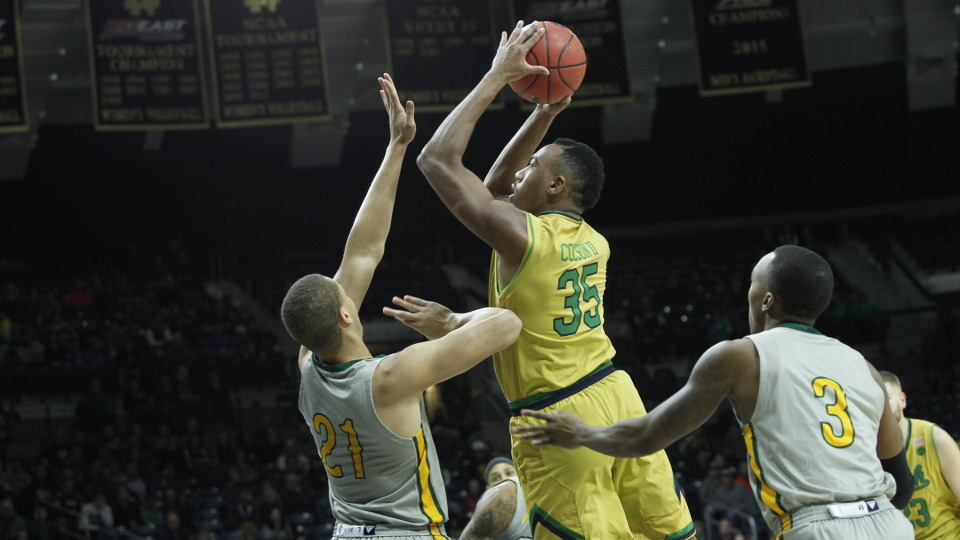 Notre Dame senior forward Bonzie Colson is expected to miss two months after suffering a left foot fracture in practice this week, per the school. One of the country’s most indispensable players, Colson will undergo surgery on Thursday. The preseason ACC Player of the Year and All-American is averaging 21.4 points, 10.4 rebounds, 2.4 blocks, and 2.0 steals this season while leading the Fighting Irish to an 11-3 record. He currently ranks second in KenPom’s Player of the Year rankings behind Oklahoma’s Trae Young. “We are all feeling for Bonzie right now, who was performing as well as any player in the country,” said Notre Dame head coach Mike Brey. ” We need to embrace this challenge. This program has lost key guys before and we figured out a way to earn an NCAA bid.” Though unranked at the moment, Notre Dame soared to as high as No. 5 in the AP Poll following a Maui Invitational title back in November. More recently though, the Irish have lost headscratchers to a pair of in-state foes in Ball State and Indiana. Between a daunting upcoming ACC schedule and the fact that Notre Dame lacks quality depth (they’re ranked 346th in Bench Minutes), Brey and company will have their hands full without their do-everything star, who hopefully will return in time for the ACC Tournament beginning March 6. Brey told NCAA.com Tuesday night that he told Colson and his father, Bonzie, that “we’ll be conservative. He’s got an uphill battle. He’s got a lot to love. We will not bring him back until he’s completely ready.’’ Photo: Notre Dame Athletics Follow Mike on Twitter Follow Adam Zagoria on Twitter And like ZAGS on Facebook

No. 18 Texas Tech Takes down No. 10 Kansas for First Ever Win at Allen Fieldhouse