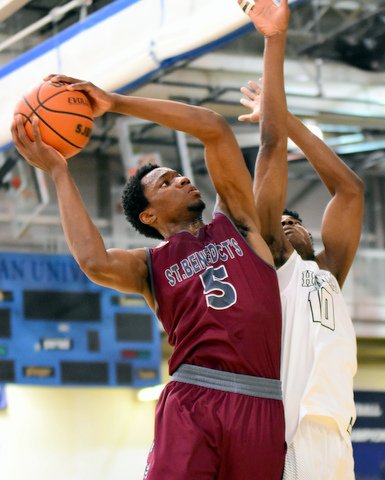 By ADAM ZAGORIA UNION, N.J. — Following two straight losses in ACC play, North Carolina head coach Roy Williams and assistant Hubert Davis showed up at Kean University on a frigid Sunday afternoon. “Looking for some basketball players,” Williams, flashing a smile, told a reporter as he took his courtside seat. He may have found one in Precious Achiuwa, the 6-foot-9 junior wing from St. Benedict’s Prep. Achiuwa played a brilliant game, going for 19 points, 10 rebounds, 4 blocks, 4 rebounds and 3 steals as the Gray Bees, No. 4 in the USA Today poll, knocked off Hudson Catholic, 66-60, in the SFIC Basketball Festival to remain unbeaten (13-0). “For me, I know how crazy it gets with the recruitment,” said Achiuwa, the younger brother of former St. John’s big man God’sgift Achiuwa. “For me, I’m just focused on getting better. I’m just focused on the season right now. Every other thing is secondary.”

Roy Williams in the house at Kean U for @PreciousAchiuwa pic.twitter.com/d0nVL27C1l

Uncommitted junior guard Lester Quinones added 23 points, hitting 5-of-6 from beyond the arc, as coaches from Oregon, Villanova, UConn, Georgetown and Rutgers looked on. Achiuwa, who entered averaging 20.9 points, 11.4 rebounds and 3.6 assists, holds offers from UCLA, Oregon,  St. John’s, Kansas, UMass, Minnesota, Mississippi State, Ohio State, Syracuse, and VCU, among others, but has yet to pick one up from reigning national champion UNC. Achiuwa flashed an all-around game with the Carolina coaches watching. He was 2-for-3 from beyond the arc. He slammed home several emphatic dunks right in front of Williams and Davis. He dished an assist to Quinones to extend St. Benedict’s lead to 63-57 in the final seconds. He blocked Jahvon Quinerly’s shot with 17 seconds left. And he made 3-of-5 free throws in the final seconds to ice the win.

“He’s a pro, there’s not much to say,” said Gray Bees coach Mark Taylor, whose team improved to 13-0. “He might be the best I’ve ever coached and I had Jay Williams, who was No. 2 in the draft, I had Tyler Ennis, No. 18, and Andrew Bynum, No. 10 in the draft. We’ve had other players make the pros. “The thing with Precious is, his tools are different. He’s 6-9. His hands are big. He’s athletic. He touches almost the top of the backboard. He blocks shots, he dunks, he runs the floor, he can shoot the three. He just has so many different things that he can do that he can dominate in different areas of the game, which is rare.” Taylor said Williams and Davis “were supposed to come twice earlier in the year and they didn’t come, but it was good to see them there.” Asked if he thinks they’ll offer Achiuwa, Taylor said, “Look, who knows what they’re going to do? I think everybody in the country should offer him. The kid is that good and he’s got a 3.8 GPA, so he’s the complete package on and off the court.” Oz Cross, who coaches Quinones and Achiuwa with the New Heights AAU program, said this was Williams’ first look at Achiuwa. “Hubert likes him a lot, Roy hasn’t had a chance to see him that much so he wanted to come out and see him,” he said. “[He showed] he’s versatile, he guarded, he defended a big time player [Oregon-bound wing Louis King], he shot a couple threes, he made some assists, he got to the rim, he did a little bit of everything,” Cross said. As far as his recruitment, Cross said he’s wide open: “Yeah, he hasn’t started yet.” With Quinones and Achiuwa in the fold, St. Benedict’s figures to win a lot of games and attract many coaches for the next year at least. “It’s kind of hard to stop me and Precious when we’re on the same team,” Quinones said. “Because if they help then I’m open. If they don’t, Precious has a dunk. I feel like our three was better than their three and we came together as a team.” Souleymane Diakite added 12 points, 5 rebounds and 4 assists as the third member of the Gray  Bees’ Big Three. Quinerly led Hudson Catholic (4-3) with 22 points and 5 assists, King had 12 points and 5 rebounds and Ohio State signee Luther Muhammad notched 12 points and 3 boards.

While Hudson Catholic gears up for the brutal Non-Public North B playoffs beginning next month, St. Benedict’s plays in the State Prep tournament and wanted to make a statement against a team that began the season the USA Today Top 25. “Oh yeah, we definitely wanted to win that game,” Achiuwa said. “We believe we’re the best team in Jersey and we don’t get the credit for that. People overlook us and overlook what we can do. We wanted to show everyone that we’re the best team in New Jersey and we proved that. Achiuwa and St. Benedict’s look forward to hopefully competing in the Dick’s High School Nationals in New York. “Oh yeah, that’s the goal,” he said. “We’re trying to get to the Dick’s and hopefully take it.” Photo: D1 Hoops/Mustafa Hooten Follow Adam Zagoria on Twitter And Like ZAGS on Facebook