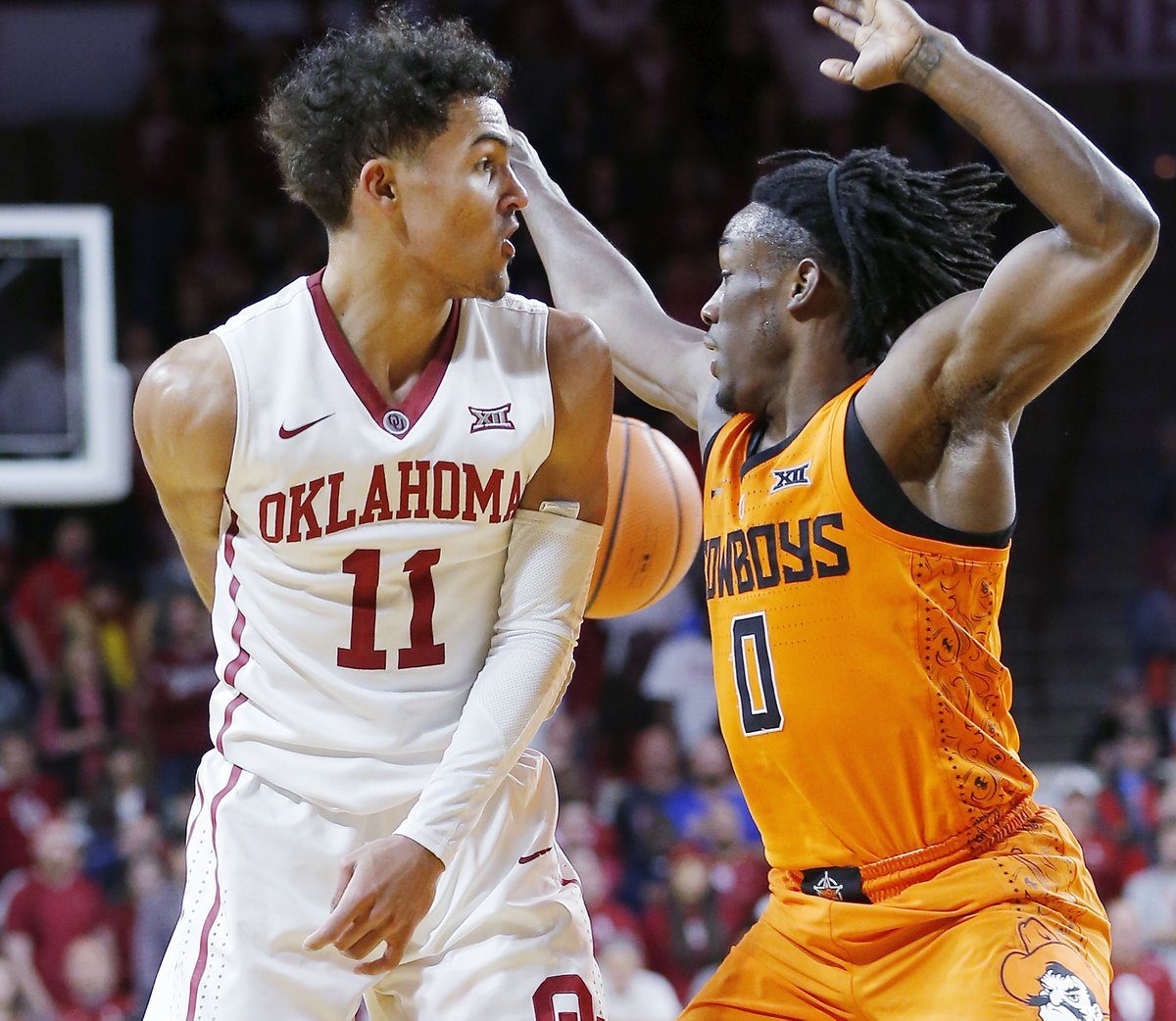 By MIKE McCURRY 2018’s first edition of the Weekend Shootaround previews Trae Young vs. Jevon Carter and friends, identifies Kentucky’s best all-around player and sets up the defending champs visiting perennially undervalued Virginia.   No. 12 NORTH CAROLINA AT No. 8 VIRGINIA—SATURDAY, 1:00 (ESPN) London Perrantes, who finished with the most minutes played in program history, graduated. A trio of role players transferred. So, not unlike every other year, we underestimated Virginia in the preseason. Well, shame on us. Again. The Cavaliers are 13-1, with their only loss coming at West Virginia. They’re KenPom’s No. 3 team in the country. They dispatched in-state rival Virginia Tech in Blacksburg on Wednesday by 26. And on Saturday, they’ll be going for their fifth straight home win over North Carolina. Tony Bennett’s Pack Line ranks first in KenPom’s adjusted defensive efficiency metric. Offensively, it’s all about the Class of 2016 for Virginia. Sans man bun, Kyle Guy (15.5 PPG, 46 percent 3FG) remains electric. Reigning ACC Player of the Week Ty Jerome is averaging 17.8 points in his last four games, drilling 14-of-21 three-pointers in that span. But the hidden gem in that class is redshirt freshman forward DeAndre Hunter. Blacksburg was the latest stop on Hunter’s Sorry 4 The Wait tour. He dropped 14 points for the second time in three games. Usually a small forward, Hunter saw most of his burn from the power forward spot with his post teammates battling foul trouble. Trust me, you want to buy stock in Hunter before Bennett fully unleashes him. UNC, fresh off a one-point loss at Florida State on Wednesday, is still seeking a consistent approach on both ends of the floor. The defending champs also have a razor-thin margin for error this season—that’s a byproduct of no longer rebounding 41 percent of their missed shots, as they did last year with the likes of Kennedy Meeks, Isaiah Hicks, and Tony Bradley eating glass. I think Roy Williams needs to adjust to losing all of those traditional bigs by committing more to small ball, a foreign language to the Hall-of-Fame coach. UNC’s best potential lineup features Cameron Johnson at the 4 surrounded by Joel Berry, Kenny Williams, Theo Pinson, and Luke Maye. But we don’t know that for sure because the Tar Heels have rolled with that quintet merely 11 percent of the time in the last five games. This isn’t a typical Roy Williams frontline. He’s already relying on an undersized, untraditional center in Maye. Why not double down by utilizing the perimeter-oriented Johnson at power forward more frequently than, say, vanilla freshman Garrison Brooks?   No. 7 OKLAHOMA AT No. 6 WEST VIRGINIA—SATURDAY, 7:15 (ESPN2) The nation’s best offensive player going head-to-head against arguably its top defensive player for 40 breakneck minutes in a Top-10 showdown? Yeah, I’d tend to think that qualifies as appointment television. Trae Young is pacing the country in both points (29.4) and assists (10.6). 2-time MVP Stephen Curry, whom the freshman point guard has been compared to, has taken notice. Young is well on his way to pairing with fellow BMOC Baker Mayfield as the first Heisman Trophy winner/National Player of the Year duo from the same school in the same year since another Sooners’ tandem a decade ago: Sam Bradford and Blake Griffin. On Saturday, Young will likely face his toughest test to date: Press Virginia, led by senior guard Jevon Carter, the reigning national Defensive Player of the Year. Remember when WVU was run out of Germany in a 23-point season-opening loss to an undermanned Texas A&M squad? All the Mountaineers have done since is reel off 13 straight wins, including road triumphs at Oklahoma State and Kansas State to kick off league play despite Carter being suboptimal offensively (7.5 PPG, 18% FG in two Big 12 games). Picking up the slack for Carter of late has been Lamont West (15.6 PPG on 54 percent FG in last 7 games; 10.1 PPG on 36 percent FG in first 7 games this season) and three-star freshman dynamo Teddy Allen (last 5 games: 82 points in 81 minutes). West Virginia will get another huge boost a week from Saturday when two-year starter Esa Ahmad regains his eligibility. We should have a much clearer picture of the Big 12 after Tuesday, when Oklahoma completes a stupid four-day, two-game stretch by hosting Texas Tech, who just whooped up on Kansas at a place nobody ever does (more on that below). But let’s worry about that next week. Because Saturday’s tilt between the two fastest-playing teams in the best conference in America might not just be the game of the day—it has the potential to be one of the games of the year.

Alright Mountaineer Nation and @WVUMANIACS , hope the holiday break was terrific with the family. While you were gone, @WVUhoops has been on a mission in non-conference play and now in Big 12 play. Now we need you, starting this Saturday with #7 Oklahoma coming to WVU! Let’s Gooo

No. 17 KENTUCKY AT No. 23 TENNESSEE—SATURDAY, 9:00 (SECN)  Tennessee needs this win worse than it needed a football coach following the Greg Schiano debacle. You know it, I know it, and Rick Barnes knows it. A brief synopsis of UT’s season thus far: They were picked to finish 13th in a 14-team SEC. Expectations shifted with a phenomenal Battle 4 Atlantis experience, one in which the Volunteers beat Purdue and NC State while also putting a scare into Villanova. But Tennesee has expressed too much generosity this season—in their losses, they led Villanova by 15 late in the first half, led UNC by 1 with a minute to go, led Arkansas (last Saturday) by 9 with 3:53 remaining, and raced out to a 28-14 lead in Tuesday’s setback to Auburn. At that point, Barnes had seen enough. He ripped into his squad following the Auburn loss, saying things like: The verbiage cuts deep. It’s painful. But not as painful as an 0-3 start in SEC play, which would be the case with another setback on Saturday. Kentucky is in the midst of a stretch consisting of four road contests in a five-game span. The Wildcats survived their first true road game of the season on Wednesday, 74-71 at LSU. Kevin Knox (16 points on 7-of-12 FG, 11 rebounds) got his groove back and PJ Washington (18 points on 8-of-10 2FG) was a monster down low, but the story once again was the youngster that is evolving into Kentucky’s best all-around player. Shai Gilgeous-Alexander. He’s averaging 21.0 points, 4.0 assists, 4.0 rebounds and 2.7 steals in his last three games—wins over Louisville, Georgia, and LSU—while shooting 49 percent from the floor. He’s also caused plenty of disruption defensively via his length, athleticism, and mindfulness. Not too shabby for a guy who is still coming off the bench and ranked as the seventh-best incoming freshman in Kentucky’s 2017 class. SGA ditched his unique braids immediately before this three-game tear. A trip to the barber shop cannot serve as the sole explanation behind the Canadian combo-guard’s breakout surge, but suddenly his game looks as polished and controlled as his fresh shape-up.   No. 10 KANSAS AT No. 16 TCU—SATURDAY, 9:15 (ESPN2) Kansas hasn’t been below .500 in Big 12 play at any point since starting out 1-2 in the 2005-06 season. That could very well change on Saturday when the Jayhawks visit TCU. In the Big 12, you have no choice but to bounce back quickly or you’ll be swallowed up by the quality and girth of the league. Therefore, Kansas better forget that they never led in Tuesday’s 12-point home loss to Texas Tech, that Devonte’ Graham was the only Jayhawk to show up against the Red Raiders, and that they’ve allowed 1.18 points-per-possession in each of their first two conference games while getting dominated on the defensive glass. Aside from all that, Bill Self can rest easy at night. These aren’t your fathers’—or even older brothers’—Kansas Jayhawks. This version is over-reliant on three-pointers (Shocker: Their two worst three-point shooting games this season have resulted in losses), appears to be more shook of the free throw line than toddlers are of the dentist, and also stand as the worst second-chance unit in the Self era. Life is much easier for Jamie Dixon at his alma mater. In Year One, Dixon led TCU to the NIT title. This being Year Two, Dixon looks poised to lead the Horned Frogs to their first NCAA Tournament since 1997-98. TCU rebounded from a 1-point home loss in overtime to Oklahoma last Saturday by winning at Baylor by three in overtime on Tuesday. Expect another nail-biter against Kansas. And, due to the Horned Frogs’ combination of offensive firepower, experience, rotation continuity, and size, I give the edge to TCU in this one. OTHER GAMES TO MONITOR (ALL TIMES EASTERN)  No. 21 Seton Hall at Butler (Saturday, 2:30, FS1) No. 22 Arkansas at Auburn (Saturday, 6:00, ESPNU) Marquette at No. 3 Villanova (Saturday, 8:00, FS1) No. 1 Michigan State at Ohio State (Sunday, 4:30, CBS) No. 24 Florida St. at No. 15 Miami (Sunday, 6:00, ESPNU) SMU at No. 19 Cincinnati (Sunday, 6:00, ESPN2) No. 4 Arizona State at Utah (Sunday, 8:00, ESPNU) Photo: @OU_MBBall Follow Mike on Twitter Follow Adam Zagoria on Twitter And like ZAGS on Facebook