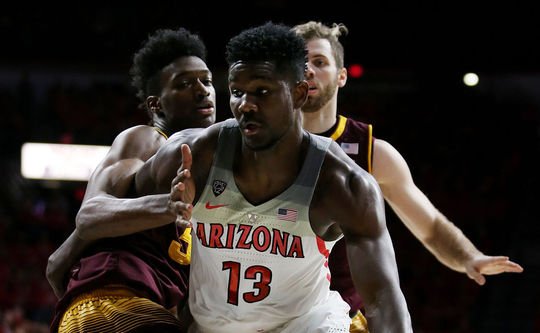 By: MIKE McCURRY In the most anticipated version of the Grand Canyon State rivalry since the 1994-1995 season, Arizona reminded Arizona State that the road to the Pac-12 title, though more congested on the local lanes this year, continues to run thru Tucson. On the strength of Deandre Ayton’s 23-point, career-high 19-rebound performance and Allonzo Trier’s 23 points, No. 17 Arizona held serve at home at the McKale Center by outlasting No. 3 and previously unbeaten Arizona State, 84-78.

The rim is still rattling after this one.

Saturday began with three undefeated teams. It will end with none. No. 10 TCU fell victim to Trae Young and No. 12 Oklahoma. Then top-ranked Villanova spit the bit at Butler. Arizona completed the triumvirate, extending its winning streak to eight in the process. Let’s call it what it is: Arizona was supposed to win this game. They were home. They were favored. And the Wildcats took care of business, namely for three reasons:

Allonzo Trier on how opposing teams can prepare for Deandre Ayton: “I don’t think you can."

As for Arizona State, it’s impossible not to be blown away by Bobby Hurley’s squad, one that was picked to finish sixth in the Pac-12 this season. Holder is the best point guard in the league and one of the best in the country. Aside from him, ASU has a multitude of options that can take over a game at any moment, mainly Evans and sixth man Remy Martin. Mickey Mitchell, just five games into his Sun Devils tenure upon transferring from Ohio State, is the ultimate glue guy, bringing a point-forward mentality, high-IQ, and defensive intensity to the table. Further help in a thin frontcourt will come in the form of Kimani Lawrence, a four-star freshman that could make his collegiate debut as soon as next week after suffering a stress fracture in his left foot in the preseason.

Don't count them out, @SunDevilHoops making a comeback led by Tra Holder.

The Sun Devils play a fun, fast style, can arguably consider themselves a top-5 offense in America, and have a slightly higher defensive ceiling than their 101st adjusted defensive efficiency ranking suggests. Which is great for the state of Arizona basketball and the Pac-12 as a whole. Hurley was an animated as ever on the sidelines and even jarred with fans on Saturday. Miller is far from the reticent type himself. Ayton received a technical for elbowing Evans. The two best teams this season in the Conference of Champions hate each other’s guts and happen to be separated by a 90-minute drive.

Bobby Hurley had some words with the fans at McKale going into the tunnel at the half. #ASU #UA pic.twitter.com/yOOtBkMi2W

Jordan Tucker to Transfer from Duke