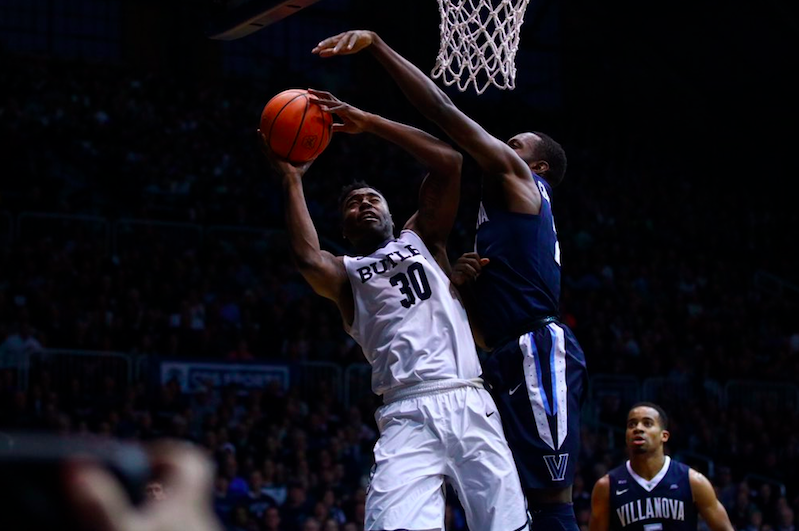 By MICHAEL MAROT INDIANAPOLIS (AP) — Villanova’s perfect season is over and its reign at No. 1 probably is, too. Kelan Martin scored 24 points and Paul Jorgensen had a career-high 23 to help Butler upset the previously unbeaten Wildcats 101-93 on Saturday. It’s the second straight year the Bulldogs (12-3, 2-0 Big East) have ended Villanova’s perfect start. Since late February 2016, Villanova is 44-1 in the regular season against everyone else, and 0-3 against Butler, per IndyStarSports.

Paul Jorgensen has all kinds of range for @ButlerMBB. pic.twitter.com/wuWUpEvOpV

Jalen Brunson had 31 points and Mikal Bridges finished with 21 to help Villanova (13-1, 1-1) cut a 23-point deficit to six with 1:33 left. But Brunson missed the front end of a 1-and-1 with a chance to make it a four-point game and the comeback bid fell short. Afterward, Butler students stormed the court — even after the public address announcer instructed them to wait until players had left the court.

It was a stunning twist for Villanova, which had won 10 of its 13 games by 14 or more points and was allowing 65.8 points per game. But the difference Saturday was the Bulldogs’ 3-point flurry. They made seven in the final 7 minutes of the first half to take a 53-45 lead then made all five of their 3s in the second half. And when the Wildcats attempted to defend the arc, Butler took advantage of the open lanes with a bevy of layups and dunks. Butler wound up 15 of 22 on 3s. Yet the Bulldogs, who led 81-58 with 10:23 to go still struggled to put this one away. When Villanova went to its pressure defense, the Bulldogs got stagnant and started throwing the ball away. The Wildcats charged back with a 14-0 run to make it 84-76 with 5:04 to play and got within six on Brunson’s 3 with 25.4 seconds left. Kamar Baldwin had 19 points, nine rebounds and seven assists for Butler while Jorgensen and Martin each made four 3s. It’s the first time the Wildcats have allowed more than 100 points in a game since they gave up 101 to Creighton late in the 2013-14 season.

Butler seems to have Villanova’s number — regardless of the coach or players. https://t.co/BcbXicNt72

BIG PICTURE Villanova: The Wildcats have lost five times in the last two seasons — three times to Butler. Yes, they were at Hinkle Fieldhouse where the Bulldogs are undefeated this year. But trying to explain another loss in this series, all while ranked No. 1 or No. 2, seems almost incomprehensible. Butler: LaVall Jordan got his first signature win since returning to his alma mater as coach. Butler has now upset the top-ranked and previously unbeaten Wildcats each of the last two seasons. What Butler fans will be asking: Is it a fluke or a team rounding into form? UP NEXT Villanova: The Wildcats get a short break before hosting Marquette next Saturday, ending a 37-day stretch with only one home game. Butler: Renews its rivalry at Xavier on Tuesday. Photo: Jimmy Lafakis (@JJLII30)