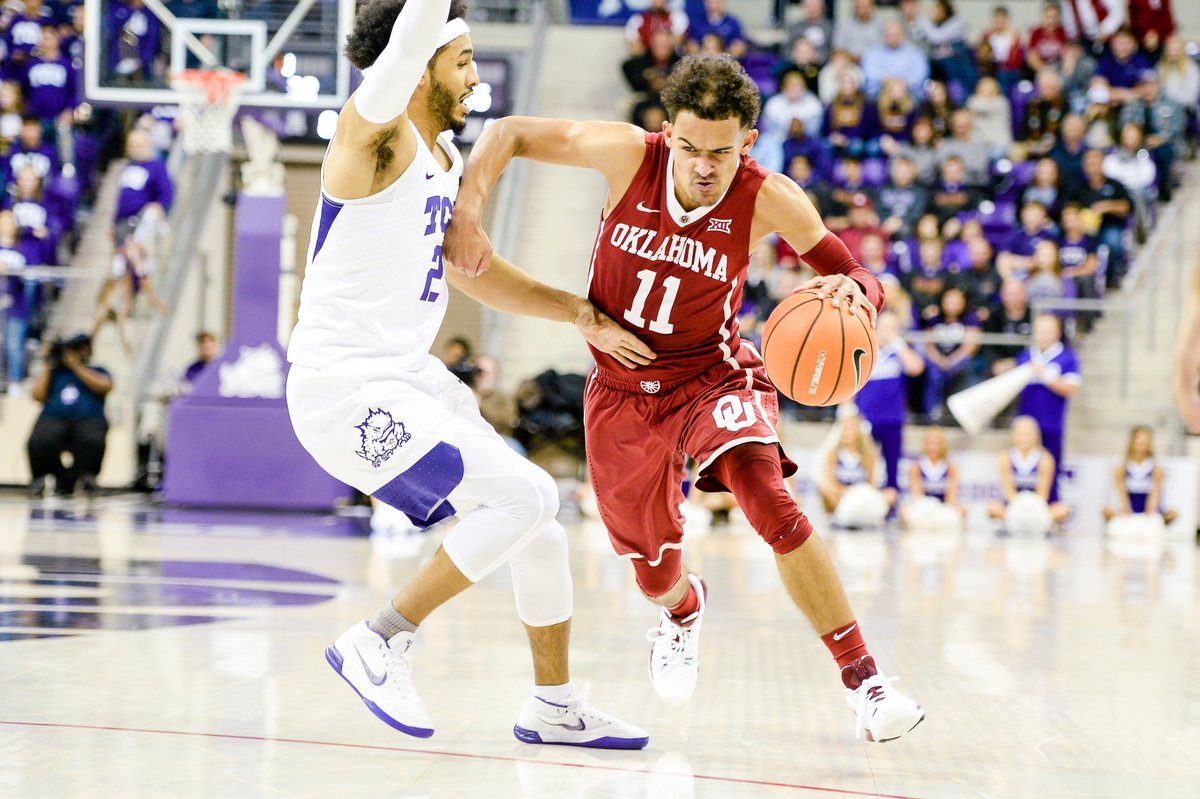 By: MIKE McCURRY  Trae Young was the near-consensus favorite to win National Player of the Year thru the non-conference portion of the season. It appears that transitioning to the rigors of Big 12 play isn’t going to faze him one bit. Young finished with 39 points—his second-highest output, trailing only the 43 he dropped on Oregon back in November—and 14 assists (also his second-highest total to date), leading No. 12 Oklahoma to a 90-89 win on the road over No. 10 and previously undefeated TCU in the Big 12 opener for both programs.

Trae Young had been hearing it from the TCU crowd all day, REALLY wanted this one. Love this kid's fire.

It’s the second true road victory over a Top-10 opponent in the span of two weeks for the Sooners, who also shocked then-No. 3 Wichita State on December 16. As sensational as Young was, which we practically say twice a week nowadays, he couldn’t do it alone. Help, at least in the scoring department arrived in the form of Kameron McGusty’s 22 points, matching a career-high. Contributions were also had from Christian James (10 points, 5 rebounds), Jamuni McNeace (8 points, 6 rebounds, 3 assists, 2 steals, 4 blocks, and countless winning plays late), and Brady Manek (13 defensive rebounds).

Kameron McGusty ties the game for the Sooners!!

With TCU falling to 12-1—the Horned Frogs have been on the wrong end of all six league openers since leaving the Mountain West Conference—the lone two unbeaten teams in college basketball are No. 1 Villanova (at Butler on Saturday) and No. 3 Arizona State (at Arizona on Saturday). As always, though, it starts and ends with Young. He made six three-pointers, many of them from at or near the “U” in “TCU”—that’s logo range, as the kids are calling it—and also converted on 15-of-18 free throws.

Trae Young wasting no time displaying his savagery. This is the third possession of the game. Casual step back 30-footer. pic.twitter.com/MnT3aHV7l3

All in all, Young scored or assisted on 69 of Oklahoma’s 90 points.

Trae Young with the quick dribble drive and sweet floater to tie the game for Oklahoma once again against TCU.

A 6-foot-2, 180-pound freshman, Young is taking the college basketball world by storm. He’s the face of the sport right now. The question has become, “What is Oklahoma’s ceiling with Young leading the way?” The answer is that we don’t really know. And that’s what makes him so damn fun to watch. Oklahoma lost a school-record 20 games last season. In comes Young, whose childhood home is an eleven-minute drive away from campus and who averaged 42.6 points per game as a high school senior, yet also barely a projected one-and-done—per 247Sports Composite rankings, Young was the No. 23 overall player and fourth-ranked point guard in his class—and a recruit that wasn’t exactly highly coveted by John Calipari. But here Young is, boasting averages of 29.6 points and 10.7 assists per night on a historic usage level, somehow doing everything and then some in a highly efficient manner, all while leading a young, hungry group of Sooners to first a national ranking, and then a pair of road wins over Top-10 teams, and then… What’s next? A Big 12 title ripped from the stranglehold of Bill Self? A Final Four run? A (gulp) national championship? Maybe my New Year’s resolution should be to limit the hot takes. Or maybe—and perhaps both are in fact true—Young is only in the beginning stages of shocking the world. Photo: @OU_MBBall Follow Mike on Twitter Follow Adam Zagoria on Twitter And like ZAGS on Facebook