No. 16 Arizona State knocks off No. 2 Kansas – Three Takeaways 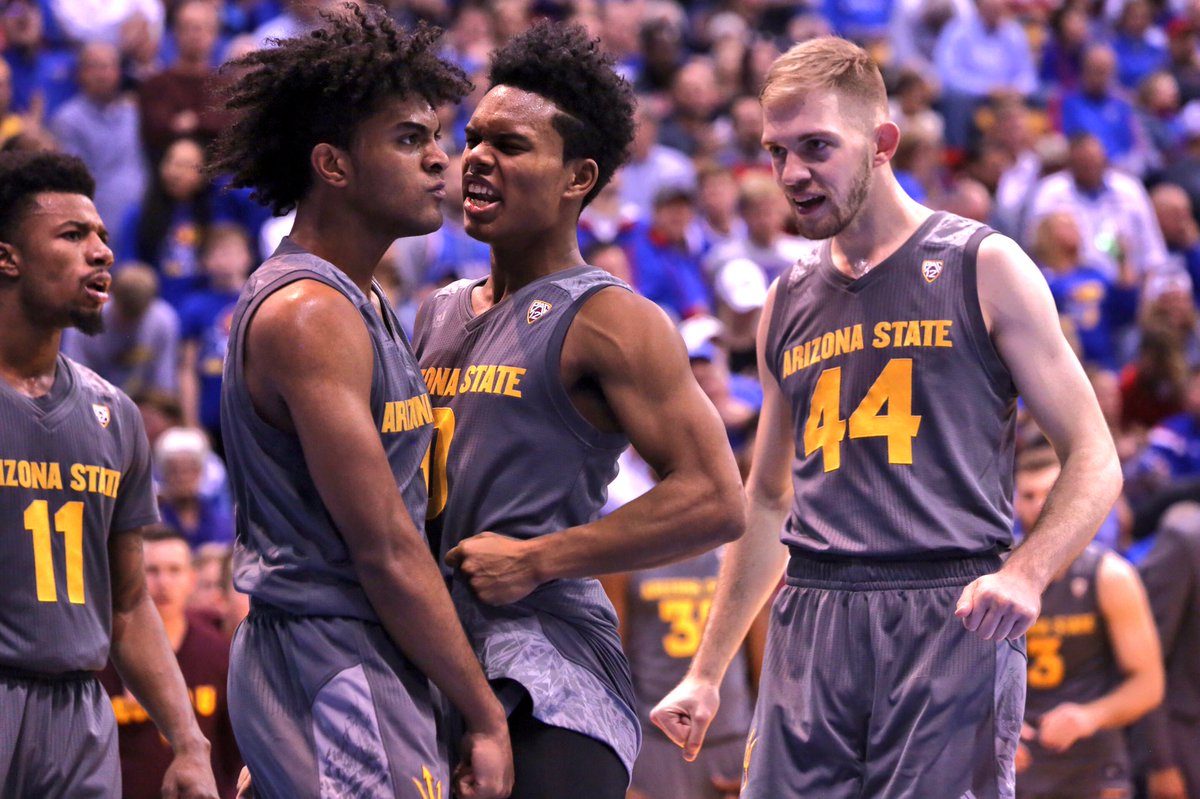 Bobby Hurley and the Arizona State Sun Devils remained unbeaten on the season and handed No. 2 Kansas their second straight loss on Sunday. The Sun Devils went into Allen Field House and emerged with a 95-85 victory to up their record to 9-0. It was Arizona State’s first road win against a Top-5 team since a January 1998 win against Stanford and it marks the first time the Sun Devils are 9-0 since 1974-75. Kansas fell to 7-2 after losing to Washington last Wednesday and figures to fall in the polls on Monday. The Jayhawks had won 19 straight games against ranked teams at home. They have lost two straight at home for the first time since 1989. “This has got to be as great a victory as Arizona State has ever had,” ESPN’s Bill Walton said on air. “This is a staggering upset today.” Tra Holder went for 29 points and 7 assists, Remy Martin notched a career-high 21 points with 5 steals and Shannon Evans went for 22 points and 5 assists. Lagerald Vick paced Kansas with 25 points and 7 rebounds and Devonte’ Graham had 19 points, 8 assists and 4 rebounds. Svi Mykhailuk added 14 points and 6 assists and Udoka Azubuike and Malik Newman scored 13 apiece. Hurley was my guest on The 4 Quarters Podcast last week. Check it out here:   And here are three takeaways from the game: Go ahead and circle that Dec. 30 game between Arizona and Arizona State Arizona State (9-0) remains one of a handful of unbeaten teams in NCAA Division 1 — along with Villanova, Georgetown, Miami and others. While Arizona was once ranked as high as No. 2 nationally before falling out of the poll, the Sun Devils have surprised under Hurley and figure to be a tough out for anyone. Go ahead and circle the Dec. 30 game between a resurgent Arizona team that now has Rawle Alkins back and Arizona State at Arizona as a critical litmus test.     Both Hurley Brothers could go do dancing Bobby Hurley and his younger brother Dan Hurley speak regularly about their respective teams and their respective approaches to baketball. While Rhode Island made the NCAA Tournament a year ago after the Rams won the A-10 Tournament title, the Sun Devils missed out. This year, however, both teams could be poised for the Big Dance. Arizona State is ranked and remains undefeated, while Rhode Island is already 2-0 in the non-conference against the Big East, with wins over Seton Hall and Providence. If both Hurley Brothers make the Big Dance, that will be surely be one of the best stories of March Madness.   Kansas has help on the way The Jayhawks are only playing six players at this point but they could get deeper and better in the coming weeks. Kansas is still without freshman forward Billy Preston, and it’s unclear when the 6-10 post player will debut. Meantime, the Jayhawks will add transfer Sam Cunliffe later this month and could get Silvio de Sousa, who has a tremendous motor, at the semester break. Give Bill Self a couple of months to work those guys into the rotation and that should help Kansas’ depth going forward.   Photo: @SunDevilHoops Follow Adam Zagoria on Twitter And like ZAGS on Facebook

The Hurley Brothers are Rolling