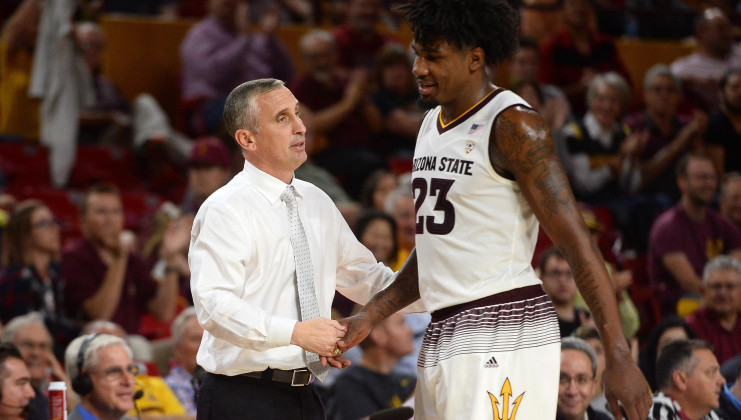 Bobby Hurley and his Arizona State Sun Devils remained unbeaten on the season with an 82-70 win over St. John’s on Friday night in Los Angeles. The Sun Devils remained perfect on the season thanks to Romello White’s 22 points and 9 rebounds, Shannon Evans‘ 18 points, 6 assists and 6 rebounds, Kodi Justice’s 15 points and 4 rebounds and Vitaley Shibel’s 11 points. St. John’s, playing without Marcus LoVett (knee sprain), was led by Shamorie Ponds’ 19 points, 7 rebounds and 7 assists, Marvin Clark’s 18 points and 7 rebounds and Tariq Owens’ 17 points, 5 rebounds and 3 blocks. “You always have to play to your strengths,” St. John’s coach Chris Mullin said. “They have three small guards and a nice shooter so I think [Bobby Hurley] is doing a good job with what he has. We know what it is like to build and he is doing a great job. Playing the right style for your personnel is what it is all about.”   Here are three takeaways from the game: Go ahead and circle that Dec. 30 game between Arizona and Arizona State Arizona State (8-0) remains one of a handful of unbeaten teams in NCAA Division 1 — along with Duke, Villanova, Georgetown and others. While Arizona was once ranked as high as No. 2 nationally before falling out of the poll, the Sun Devils have surprised under Hurley and figure to be a tough out for anyone — including Kansas on Sunday at Allen Field House. Go ahead and circle the Dec. 30 game between a resurgent Arizona team and Arizona State at Arizona as  critical litmus test.

Both Hurley Brothers could go do dancing Bobby Hurley and his younger brother Dan Hurley speak regularly about their respective teams and their respective approaches to baketball. While Rhode Island made the NCAA Tournament a year ago after the Rams won the A-10 Tournament title, the Sun Devils missed out. This year, however, both teams could be poised for the Big Dance. Arizona State is ranked and remains undefeated, while Rhode Island is already 2-0 in the non-conference against the Big East, with wins over Seton Hall and Providence. If both Hurley Brothers make the Big Dance, that will be surely be one of the best stories of March Madness.   We won’t know about St. John’s until 2018 Go ahead and pencil in Villanova, Xavier and Seton Hall as NCAA Tournament teams. The next tier in the Big East includes Creighton, St. John’s, Providence and Butler. While the first three teams are going to be dancing come March — the league had seven teams last year — it remains unclear who else will follow. St. John’s has the backcourt to make the Big Dance — with Ponds, LoVett and Justin Simon — but will need to notch at least a 9-9 Big East record and score some key wins. Go ahead and mark that Feb. 3 game with No. 1 Duke at Madison Square Garden as a key resume-builder for the Johnnies.   Follow Adam Zagoria on Twitter And like ZAGS on Facebook

No. 16 Arizona State knocks off No. 2 Kansas - Three Takeaways