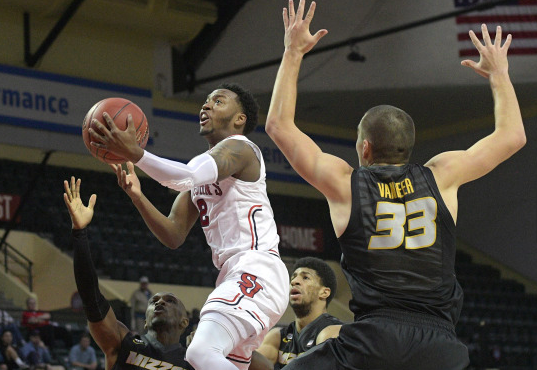 By SEAN BOCK St. John’s was able to erase a 16-point deficit, but the Missouri Tigers were too much down the stretch coming away with the victory in the AdvoCare Invitational semifinals, 90-82. St. John’s sophomore guard Shamorie Ponds scored a career-high 31 points along with 7 assists and 5 rebounds. Bashir Ahmed chipped in 15 of his 17 points in the second half while Marcus Lovett finished with 14 points for the Red Storm. Playing without freshman superstar Michael Porter Jr, who is likely out for the season, the Tigers shot 14-of-27 from 3-point land for the game and 9-of-14 in the second 20 minutes. “Better yesterday, but today’s game I thought we got off to a bad start…they pounded us on the boards,” St. John’s head coach Chris Mullin said of his team’s 1-1 start through the first two games of the tournament. “We got back into the game before the half and went on a nice run to begin the second half…then they got hot as well. So, I thought overall it was a pretty well-played game. However, they came out on the winning end.” St. John’s (5-1) will play in the third-place game of the AdvoCare Invitational on Sunday, against either No. 23 West Virginia or UCF at 12 p.m. Photo: RedStormSports Follow Sean on Twitter Follow Adam Zagoria on Twitter And Like ZAGS on Facebook