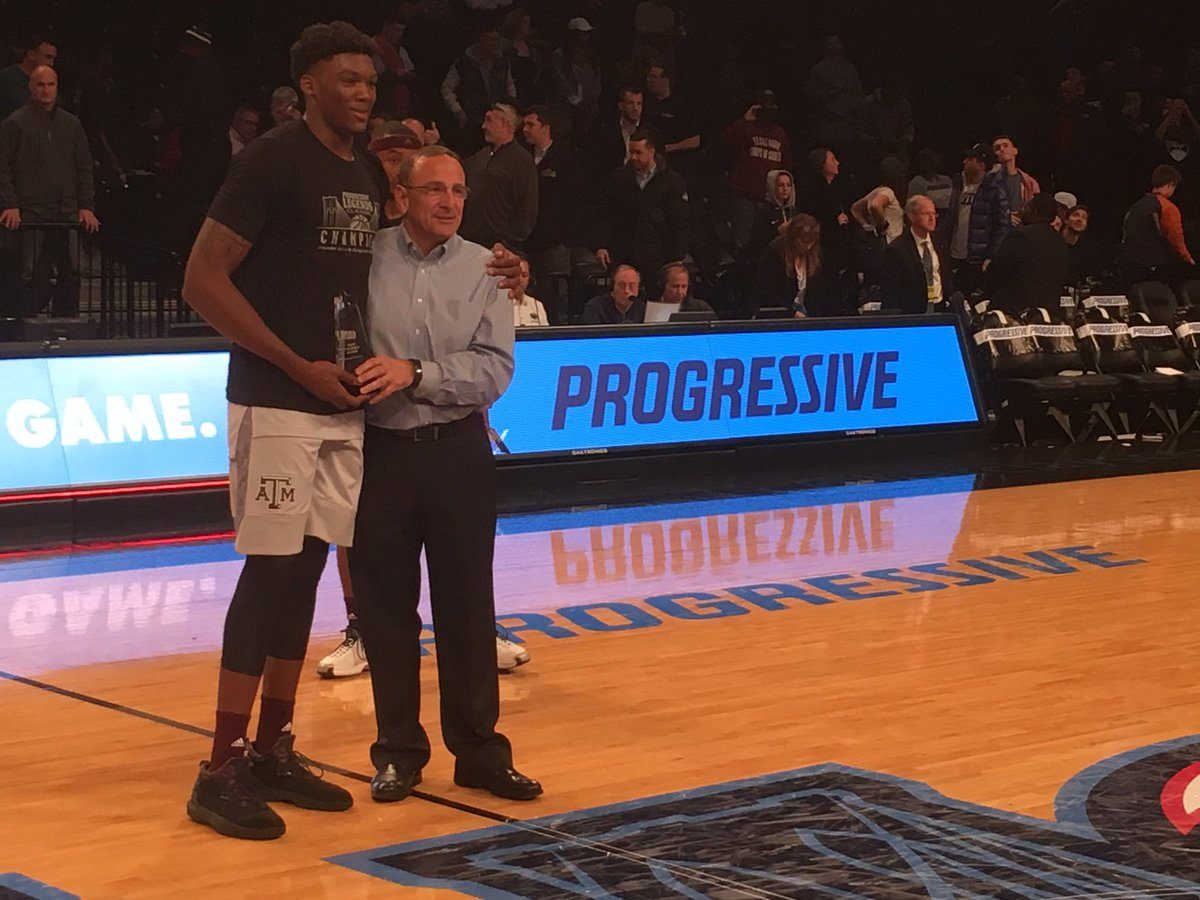 NEW YORK — When Robert Williams III learned on Wednesday that Michael Porter Jr. was likely done for the season with an impending back surgery, he messaged him on Instagram and wished him good luck. “You can’t prevent injures but when I heard about the injury this morning at breakfast I DM’ed him on Instagram, like praying for a quick recovery,” Williams told me after putting up 21 points and 10 rebounds off the bench as No. 16 Texas A&M won the Legends Classic at Barclays Center with an impressive 98-87 win over a tough Penn State team. “He’s a great player. I played him at Adidas nations and some at the [Nike] EYBL and we got a good chemistry. I was looking forward to playing against him. He’s great competition.” The 6-10 Porter Jr. and the 6-10 Williams are the two players projected to go highest in the NBA Draft out of the SEC. In a rarity this season, no Kentucky player is among the top five or 10 projected picks. ESPN had Porter Jr. at No. 2 entering Wednesday with Williams at No. 7. (Alabama’s Collin Sexton , who will be in New York later this week for the Barclays Classic, is the next-highest projected player from the SEC at No. 8.) Now, with Porter Jr. effectively done for the season — a virtual “none-and-done” after playing just 2 minutes in Missouri’s first game — Williams effectively becomes the face of the SEC. A sophomore who returned to campus despite being projected as a lottery pick last year, Williams is the best player on a Texas A&M team that seems poised to challenge for a league championship and a deep run in March. “It’s been a long journey and that’s the goal this year, bring home more trophies,” he said in the locker room. “We started off with one so we just want to keep it going.”

Williams won MVP honors at the Legends Classic in front of more than 30 NBA personnel, including executives from the Knicks, Nets, Clippers, Nuggets, Wizards, Suns, Pelicans and Magic, per Mike Scotto of Basketball Insiders.  On one play in the second half, he reached his massive right hand out on the wing for a steal and then hustled up court. He dished the ball to teammate T.J. Starks, who then rewarded Williams with one of his many alley-oop dunks on the other end. “You can throw it anywhere to that kid and he’s gonna finish,” said Penn State coach Pat Chambers, whose team is now 5-1. “He’s a big-time stud.” Said A&M coach Billy Kennedy: “He makes the game easy for our guards, when you can just throw it up anytime and he can go get 2 points and dunk it. And he effects the game defensively in so many ways. People are looking for him. And he had a couple of steals. I thought in transition he’s a really good passer and unselfish. “He’s a special player and we’re fortunate to have him. Not many teams in the country can bring a guy like that off the bench and and get that kind of lift.” Williams could easily be on an NBA roster right now, but like Michigan State sophomore Miles Bridges he felt he had unfinished business in college. That, despite coming from a single-parent household where his mother, Tundra, works three jobs. “We knew when he decided to come back, he thought it was in the best interest of him,” Kennedy said. “And obviously we were seated and very excited. Most people don’t have rim protectors like that. He protects the basket and gets us easy basket when we need them. I think he scored one true field goal in two games, the rest were on dunks. Maybe two. He had a jump hook and maybe one other field goal, but when you’re getting shots at the rim and looking down at the basket like he does it’s easy offense for you.” Make no mistake: Texas A&M isn’t just Robert Williams. They are long and deep and balanced. Point guard Duane Wilson had 22 points and 6 assists. Center Tyler Davis had 15 points and 4 rebounds. Shooting guard Admon Gilder tallied 14 points and 3 assists. And forward Tony Trocha-Morelos tallied 11 points, 5 rebounds and 3 blocks. D.J. Hogg, part of the 2014 recruiting class that includes Gilder and Davis, had an off night with just 7 points on 2-for-10 shooting with 7 rebounds. Texas A&M looks like a team that could make a deep run in March. “It just shows that we’re capable of doing something special if we can stay unselfish and continue to utilize our depth,” Kennedy said. “If we do that we’re going to have some special opportunities at the end of the season.” Asked about the Porter Jr. situation, Kennedy compared it to his own battle with Parkinson’s Disease. “All we can do is pray and hope Michael gets back quick,” Kennedy said. “I know Michael and actually helped coach his dad [Michael Porter Sr.] in college years ago so when I heard that today I’m just blessed that we’ve got everybody healthy. “And you can’t take life for granted because it changes every day for any of us. Seven years ago I was diagnosed with a disease and came to New York City, and it was a tough time. We played in a tournament here, and now I still have the disease. I’ve been blessed and God’s done some tremendous things in my life. To be able to coach this year and win a championship, seven years ago many people didn’t think I’d be able to do that. That makes it hard, to see somebody go down like that.” Asked if he ever contemplates an injury to himself, Williams said, “Yeah, I think about that all the time. Michael’s a great player, though. If he recovers like he’s supposed to, he’s back on top. He’s a great player.” When they meet up again, possibly in the Green Room at the NBA Draft, Porter Jr. could be a “none-and-done” and Williams will be a two-and-done. For now and through the remainder of this season, Williams becomes the face of the SEC, even as he roots for Porter Jr.’s healthy return.