Donald Trump: 'LaVar Ball Is a Poor Man's Version of Don King, But Without the Hair' | Zagsblog
Follow @adamzagoria

Donald Trump: ‘LaVar Ball Is a Poor Man’s Version of Don King, But Without the Hair’ 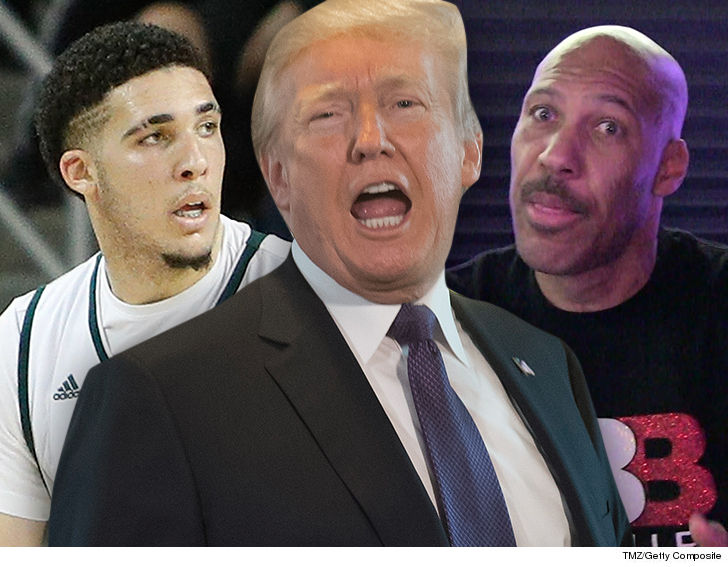 Another early morning, another Donald Trump rant about LaVar Ball. Trump woke up the day before Thanksgiving and went after the elder Ball, comparing him unfavorably to legendary boxing promoter Don King. Trump’s latest Tweets come in the wake of Ball’s appearance on CNN Monday night with Chris Cuomo in which he repeatedly refused to thank Trump for asking Chinese President Xi Jinping to release LiAngelo Ball, Jalen Hill and Cody Riley after they were arrested Nov. 8 for shoplifting in China.

It wasn’t the White House, it wasn’t the State Department, it wasn’t father LaVar’s so-called people on the ground in China that got his son out of a long term prison sentence – IT WAS ME. Too bad! LaVar is just a poor man’s version of Don King, but without the hair. Just think..

…LaVar, you could have spent the next 5 to 10 years during Thanksgiving with your son in China, but no NBA contract to support you. But remember LaVar, shoplifting is NOT a little thing. It’s a really big deal, especially in China. Ungrateful fool!

The ungratefulness is something I’ve never seen before. If you get someone’s son out of prison, he should be grateful to you! Period. I don’t care. If Hillary got my kid out of prison, as much as I hate the woman, I’d thank her corrupt ass!

The elder Ball, meantime, is conducting battles on several fronts. On top of his feud with Trump, he called out the Lakers coaching staff, saying they were “soft” in their coaching of the team and eldest son Lonzo Ball. “They’re soft,” he said. “They don’t know how to coach my son. I know how to coach him. I tell him to go get the victory. Stop messing around.” Asked for a response, Lakers coach Luke Walton said: “Absolutely nothing…it’s not what we’re here to do or talk about,” per NBC Los Angeles’ Shahan Ahmed.