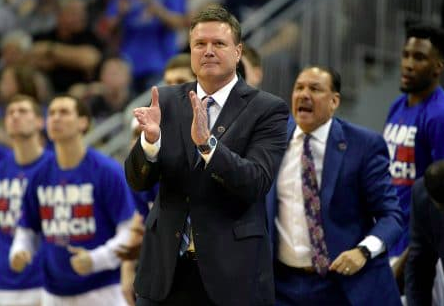 By SEAN BOCK For the fourth straight year, the NIT Season Tip-Off will take place at the Barclays Center in Brooklyn during Thanksgiving week. Kansas, Louisville, Marquette, and Tennessee, who won the tournament in their last appearance (2010), make up next year’s field. The event will move back to a Wednesday/Friday format straddling Thanksgiving with no game on Thursday.       November’s event marks the third-straight year at Barclays Center for the NIT Season Tip-Off, which has been played in New York City every November since 1985. Eventual NCAA National Champion Villanova won the event in 2015. In 2016, eventual NCAA No. 3 seed Florida State and fourth-seeded West Virginia featured in the 2016 NIT Season Tip-Off at Barclays Center. This year, Rhode Island and Virginia will go head to head in the championship game on Nov. 24. No. 20 Seton Hall and Vanderbilt will face off in the third-place game. Photo: isportsweb Follow Sean on Twitter Follow Adam Zagoria on Twitter And Like ZAGS on Facebook