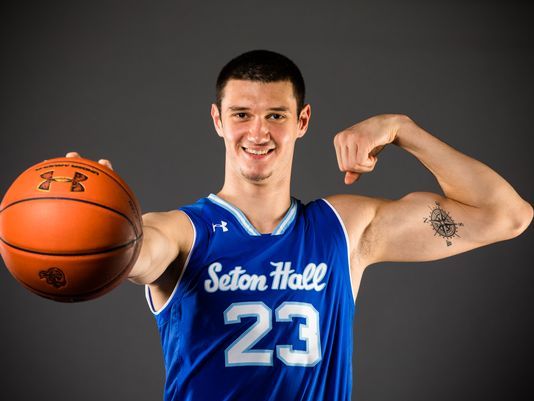 By DENNIS CHAMBERS NEWARK — Under Kevin Willard’s tenure as the head coach of Seton Hall’s basketball team, guards have dominated the spotlight. From Jordan Theodore to Sterling Gibbs to Isaiah Whitehead to Khadeen Carrington, ball-dominant guards have been a mainstay in Willard’s plan. While the 2017-18 Pirates are still flooded with talented guard play, there has been a resurgence on the block. Led by Angel Delgado, a group of Michael Nzei, Ismael Sanogo, and now Sandro Mamukelashvili find themselves in the middle of Seton Hall’s impending success. It’s no secret what Delgado — the nation’s leading rebounder last season — brings to the table. Nzei and Sanogo have carved their roles out in the rotation as polar opposites, Nezi for offense and Sanogo for defense. But the intriguing development of the frontcourt is the freshman, Mamukelashvili, who does just about everything a stretch big man does. An April signee for Willard and the Pirates, Mamukelashvili came on late at Montverde Academy and began to turn some heads just as he dotted the line to end up in South Orange. A 6-foot-10 forward with quickness and vision on the offensive end, Mamukelashvili evokes many similarities to the oversized ball-handlers the NBA is currently flooding with. Montverde Acadamy head coach, Kevin Boyle, appeared on the 4 Quarters podcast before the season began to break down the type of player Seton Hall was getting. “I went to see them practice the other day and I told Kevin [that] Sandro is going to be so much more comfortable in Year 2,” Boyle said. “Look at the all European pros that haven’t just gotten used to the speed of the game yet, it’s a different game.” A step further, Boyle even made the claim that Mamukelashvili’s unique set of skills could potentially find him a home in the NBA one day. “He looked so good in the practice at Seton Hall,” Boyle said. “And Coach Willard’s father [Ralph] was there and I think they’re looking at, this kid could be in an NBA camp one day. He’ll give him some time off the bench this year, 15-20 minutes a game this year, and then he’ll probably be a three-year starter and if you’re a three-starter at the end, he’ll probably be one of their best players during his junior and senior seasons. At 6-11 and skilled, you’re in an NBA camp, so I think they got a real good player. In today’s world, a great player because you got a four-year guy. And he loves Seton Hall. The kid loves Seton Hall so far.” Through Seton Hall’s first two games of the season thus far — wins over Farleigh Dickinson and Monmouth — Mamukelashvili hasn’t quite made an impact on the box scores as maybe his talent would suggest. Combining for just 10 points and seven rebounds in those two contests, Mamukelashvili’s inexperience is showing, but that’s to be expected. Willard thinks that eventually, it’ll begin to click for his freshmen. “Sandro as he gets more comfortable on the defensive end — he gets very frustrated with himself on the defensive end right now — as all three of them figure it out a little, you can almost see when they’re out there with the other guys that you have three guys who are out there making natural rotations and then they’re all kind of sitting there and the mouse is going around in their mind, and they’re always late. Once that kind of gets to be a natural rotation in how they’re playing, you’re going to see the freshman take big leaps. That usually happens sometime in their sophomore year.” When you ask around the Seton Hall locker room what it’s like to have the versatility of Mamukelashvili on the roster, you come away with praise and looks of excitement from his teammates. A frontcourt that already boasts one of the nation’s best traditional big men suddenly becomes opened up with a euro-style stretch four that can make key reads, and space the floor to the perimeter. “He brings a lot of versatility,” Carrington said. “I think with him it opens up lanes. When he’s out there he likes to pick and pop. He can also start a break, get guys involved, advance the ball. So it gives guys like myself a chance to get up the court and get an easy bucket.” Despite his size, Mamukelashvili contends that he was guard growing up. Before the season he mentioned that he models his game after certain NBA players, one of which being the Philadelphia 76ers rookie currently taking the league by storm. “Growing up I was playing point guard, believe it or not,” Mamukelashvili said. “I never posted up. I’m learning that kind of stuff now. All my life I worked on my handle, on pushing the ball. I always wanted to be like Ben Simmons, a point forward.” As the NBA continues to transition into big guys that can handle the ball and stretch the floor, Mamukelashvili may eventually have a home in basketball’s highest league. For now, however, he’s still just a freshman at Seton Hall with a load of growing left to do. His senior frontcourt peer, and potential NBA candidate himself, Delgado, believes Mamukelashvili will show everyone the potential they keep talking about soon. “Sandro’s a great player,” Delgado said. “I really like his game, how he goes every single game. He’s a freshman. When I was a freshman I was like him, too. I wasn’t that strong, I was kind of soft. During the game, when games keep going, he’s going to find his way and I think he’s going to show people what he really is.”   Photo: Seton Hall Athletics Follow Dennis on Twitter

After early struggles, the time is now for Kevin Willard & Seton Hall to make a statement