After early struggles, the time is now for Kevin Willard & Seton Hall to make a statement | Zagsblog
Follow @adamzagoria

After early struggles, the time is now for Kevin Willard & Seton Hall to make a statement 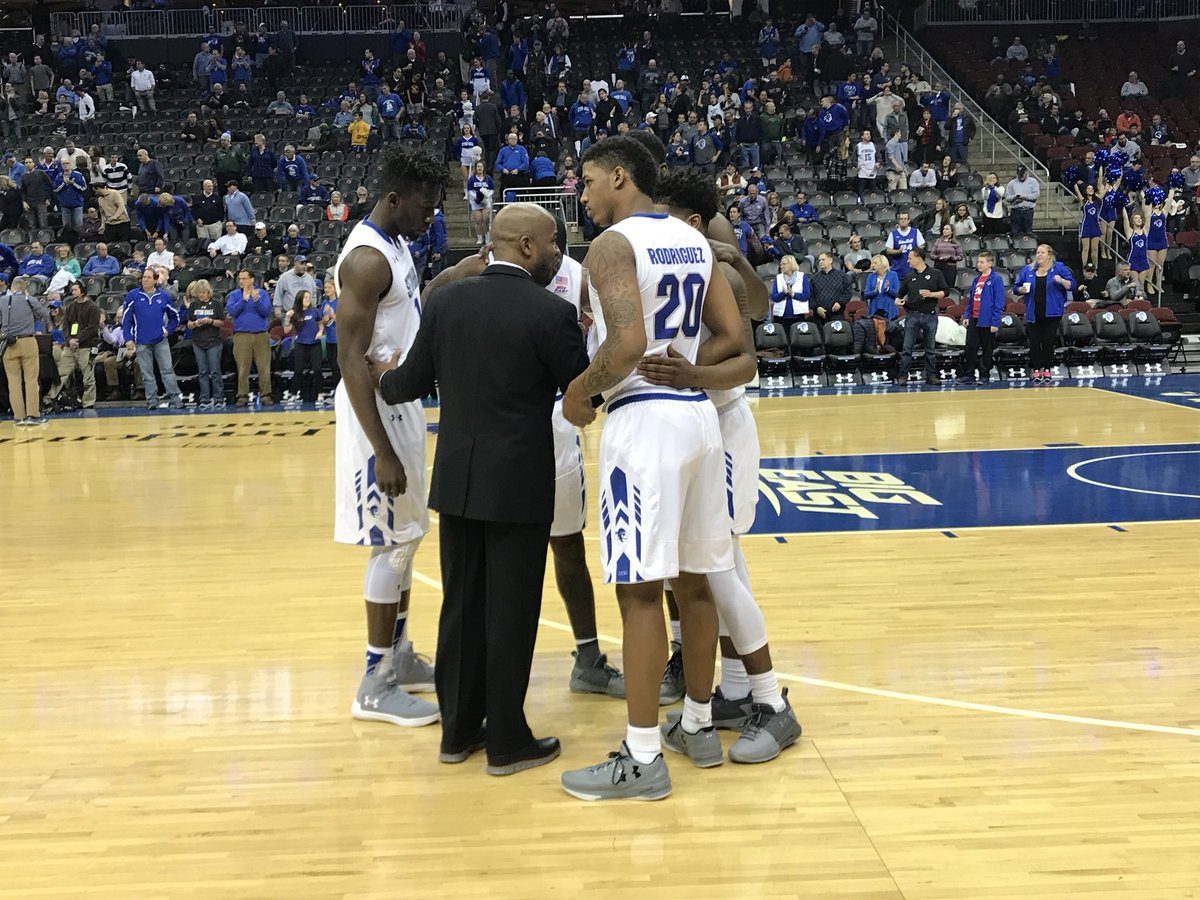 NEWARK — Life is good these days for Seton Hall coach Kevin Willard. Willard is coaching a senior-laden Pirates team that is ranked in No. 23 in both the Preseason AP and USA Today Coaches’ Polls. His best player, senior center Angel Delgado, is in on the preseason Naismith Trophy Watch List. This is the deepest squad Willard has had in his eight years at the Big East school. The team is loaded with a strong freshmen class that features several highly touted players, including 6-foot-10 forward Sandro Mamukelashvili and 6-5 wing Myles Cale, two potential future pros. And Seton Hall opened the 2017-18 season with a 90-68 rout of Fairleigh Dickinson on Friday at the Prudential Center. Senior wing Desi Rodriguez led the way with 17 points, Cale had 12 and Delgado continued his double-double history with 10 points and 10 rebounds. But things haven’t always been this good for Willard, the 42-year-old who seems poised now, finally, to enjoy the fruits of his recruiting labor over the past few years. Soon after Willard took the Seton Hall job in the spring of 2010 — the same tumultuous period that saw Rutgers hire Mike Rice and St. John’s hire Steve Lavin (both of whom have since been let go) — Herb Pope collapsed and effectively died in a a Seton Hall stairwell. Pope, a rugged power forward with a history of off-the-court troubles, underwent heart surgery to deal with a birth defect — an anomalous right coronary artery — that Willard said they “usually only find in an autopsy.” “I think the early years [Willard] was so sabotaged by injury and illness,” Seton Hall radio announcer Gary Cohen told ZAGSBLOG. “You take the job and three weeks later Herb Pope dies in the stairwell and has to be revived. I mean, that kind of set the tone for his entire tenure.”

That folks is what we call a “dooble-dooble” – the first of many to come this season, number 51 of Angel’s career! He’s got 10 points, 10 boards #PiratePursuit pic.twitter.com/o58kw0v5Js

The Pirates finished 13-17 in the first year of the post-Bobby Gonzalez Era. And across his first five years at Seton Hall, Willard compiled a record of 82-81, not exactly the stuff of legends. During the 2011-12 season, a year that featured several key holdovers from the Gonzalez Era, Seton Hall started 15-2 only to crumble and finish 21-13 and with a second-round exit in the NIT. “Great expectations turned to dust,” Cohen said. Willard was routinely criticized by fans for his lack of recruiting success. After Gonzalez’s players graduated or left the program, Willard was forced to fill out his roster with several foreign players, including Haralds Karlis, Patrik Auda and Aaron Geramipoor. Players like Auda, Geramipoor, Brian Oliver and Kevin Johnson were then ravaged by injuries. “I think about guys like Herb and Patrik Auda, guys who were never able to do what they were supposed to do because they weren’t physically able,” Cohen said. “And he had to clear out some of the difficulties that had cropped up under the previous administration.” Things began to turn, however, heading into the 2014-15 season. In July of 2013, Ismael Sanogo, a 6-7 forward out of Newark East Side, became Willard’s first commit of what would become a blockbuster class. In August, Delgado, a native of the Dominican Republic who had captured the Nike EYBL rebounding title that summer, committed to Seton Hall when he was also being courted by Kentucky, Virginia, Florida State and others. The following month, Khadeen Carrington, a versatile 6-3 scoring guard out of Bishop Loughlin, committed to the Pirates and soon began to work on other New York City stars. That same month, Isaiah Whitehead, a 6-4 guard out of Brooklyn Lincoln, committed to Seton Hall over St. John’s and Indiana in what became a unique package deal involving Lincoln coach Dwayne “Tiny” Morton (who would only last one year at Seton Hall). “It would certainly be a breakthrough recruiting class for Seton Hall, with the guys they have,” longtime New York recruiting expert Tom Konchalski said at the time. Two days before Christmas, Rodriguez, Whitehead’s 6-6 teammate and an athletic wing player, committed to the Pirates during the City of Palms Classic in Florida. That gave Willard a loaded and diverse recruiting class that became the building blocks for the next several years. “Obviously, when he got this class, when Isaiah came in with the rest of this crew, it was a major turning point,” Cohen said. Still, it wasn’t all smooth sailing. During the 2014-15 season the team got off to a 13-2 start, only to split apart amid a fractured locker room. Brandon Mobley called out his teammates, saying “Winning is not on everybody’s mind right now. Everyone’s focused on things besides winning. It’s up to the guys if they want to play the season out or play with a purpose.” After initially joining Twitter, Willard ultimately removed himself from social media because he was tired of what he saw. (In March 2015, a parody account called “Stupid Kevin Willard” sprung up with the descriptor, “The life, times and mostly made-up quotes of the inept basketball coach at Seton Hall University.” Jaren Sina and Sterling Gibbs — two New Jersey natives — both transferred after the 2014-15 season. After the 2015-16 season in which Seton Hall beat Villanova to capture the Big East Tournament championship at Madison Square Garden, Whitehead left for the NBA. He now shuttles back and forth between the Long Island Nets G-League team and the NBA’s Brooklyn Nets. “But a lot of people thought we were going to be so bad when he left,” Delgado said. “But we proved people wrong, that’s all I care about.” In the last two seasons, the Pirates have made back-to-back NCAA Tournament appearances, losing in the first round both times. “To their credit and to [Willard’s] credit, they came back the last two years and have made the Tournament twice, which is a big deal for this program and now they’ve got new goals to accomplish that haven’t been seen in this program in a long time,” Cohen said. Make no mistake: the goals are big at Seton Hall this season and another first-round exit won’t be acceptable. “Yeah, it’s a ways off but you definitely keep it in the back of your head and I do think it will be a failure if we didn’t make a big run like we’re capable of doing in March,” Carrington told me. “I’m not the type of guy that hold things in my heart,” Delgado said said. “I’m ready for this year. I already forget about those two years. I’m ready for this year, I’m ready to get to the Final Four this year.” Even Willard knows this year is the year to make a run. “We’re a long way from March and obviously we want to get back to the tournament and we really feel we have something to prove when we get back there,” Willard told me on The 4 Quarters Podcast. Kevin Boyle, who coached Mamukelashvili as well as former No. 1 picks Ben Simmons and Kyrie Irving, believes Seton Hall can get to at least the second weekend in March. “I think they can definitely be a Sweet 16 team,” Boyle said on The 4 Quarters Podcast. “And once you’re there, anything could happen. You could get to a final Eight, why not?” And what happens if Seton Hall gets to the tournament and makes a run? You can imagine Power-5 schools will come calling for Willard, who would have made three straight NCAAs at that point. “I think everybody in this game knows who Kevin Willard is,” Cohen said, “and I think that he’s in a great position right now to have great success this year and enjoy all the fruits of what that brings.” Photo: Seton Hall Follow Adam Zagoria on Twitter And Like ZAGS on Facebook