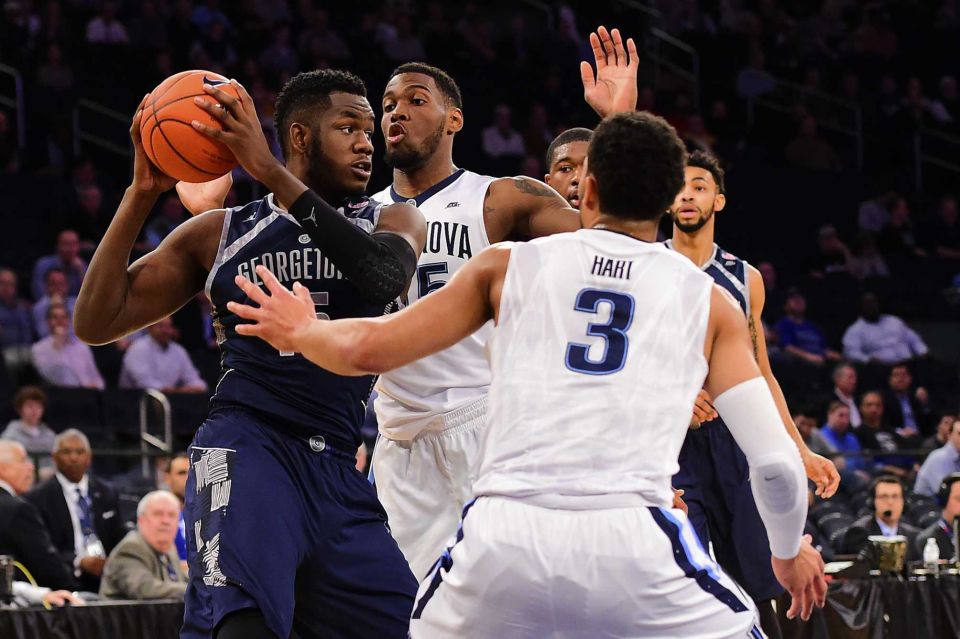 NEW YORK — When Jessie Govan learned in April that his new coach at Georgetown University was going to be none other than Patrick Ewing, he couldn’t have been happier. After all, who better to teach the 6-foot-10, 270-pound Queens Village, N.Y. native what it takes to reach his dream of playing in the NBA than arguably the greatest Knick of all time and one of the best centers in the history of the NBA? “I was ecstatic,” Govan told me this week at Big East Media Day at Madison Square Garden, where the Hoyas were picked to finish ninth in the 10-team league. “He’s a Hall of Famer and New York Knick, obviously where I’m from. “When coach got hired, I was just real excited. You know, big man, big man coach, so I’m just excited for this season.” Govan isn’t a Knicks fan, but he’s fast become a Ewing fan. “He’s a legend,” Govan said. “He’s done everything you could possibly think of with the game of basketball so I’m really just trying to be a sponge and just take in everything that he’s trying to teach me. I’m open to everything that he’s trying to get me better at.” No one has ever doubted Govan’s offensive abilities. As a senior in high school, he helped lead Wings Academy to the PSAL (Public School Athletic League) title and a berth in the Dick’s National High School Tournament. He averaged 22.7 points, 12.7 rebounds and 3.2 blocks as a senior at Wings. As a sophomore at Georgetown, he averaged 10.1 points and 5.0 rebounds. Now, entering his junior season, he was named on Friday to the Kareem Abdul-Jabbar Watch List, joining several other New York big men, including Texas freshman Mohamed Bamba, Seton Hall senior Angel Delgado and Kentucky freshman Nick Richards, a native of Jamaica who lived on Long Island before college. For all of his offensive skills, Ewing wants to see Govan develop his defensive intensity. “Two different type players,” Ewing said. “I think his offense is a lot better than mine at that stage and my defense is a lot better than his.” Said Govan: “We’ve really been working on a lot of defensive stuff, rebounding stuff. He knows I could score the ball real well so he wasn’t really concerned about that as much. But he’s still showing me some tricks on the low blocks and stuff.” Asked if Ewing was teaching him his patented 15-foot jump shot, Govan said: “We worked on it a few times, I don’t think I’ll ever get it as good as he has but we’ve done a whole bunch of diff things since he got here in April. I’m just really excited about it.” Govan is viewed as an NBA prospect and has appeared on various mock drafts, but he’s not focusing on that right now. “I try not to pay attention to things like that,” he said. “I try to take it one game at a time and then everything else will take care of itself.” As for Ewing’s assessment of his new big man protege, he said: “That’s all predicated on what he wants to do. He has a lot of talent, but he has to continue to work.”   Photo: Steven Ryan/Newsday

John Thompson: 'Patrick Ewing will get fired if he doesn't win'