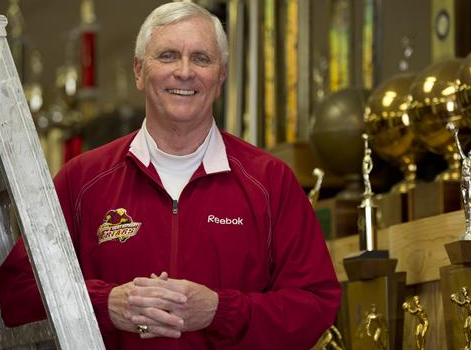 By SEAN BOCK Longtime St. Anthony (N.J.) High School coach Bob Hurley won the 2017 Best Coach Award at this year’s ESPYs on Wednesday night. “It’s really a great honor to be here tonight,” Hurley, who turn 70 July 31st, said in his acceptance speech. “Getting this award alongside all these iconic coaches, but even more specifically it’s a great honor to be representing all these great coaches.” During his 44-year coaching career at St. Anthony’s, Hurley went 1,162-119 and captured 28 State Parochial titles and four national championships. In 2010, he was inducted into the Naismith Hall of Fame, becoming the second high school coach to be inducted. “It’s a great honor to be representing all these coaches in the high school ranks because every athlete that has come up on this stage tonight, no matter what sport they play, each one of them had a coach in high school, junior college, or maybe even before who played a critical role in their development as an athlete and it’s the whole person part that I have always taken a lot of pride in,” he said. Hurley’s sons, Bobby and Danny, were in attendance for the award and now both coach at the college ranks, Bobby at Arizona State and Danny at Rhode Island. “The miracle that was St. Anthony’s, would not have been possible without my family,” Bob Sr said. With the closing of St. Anthony’s following this school year, the Hurleys have founded Hurley Family Foundation in Jersey City, where Hurley Sr. hopes to continue teaching inner-city kids and giving them the opportunity to play basketball in an organized setting. Follow Sean on Twitter