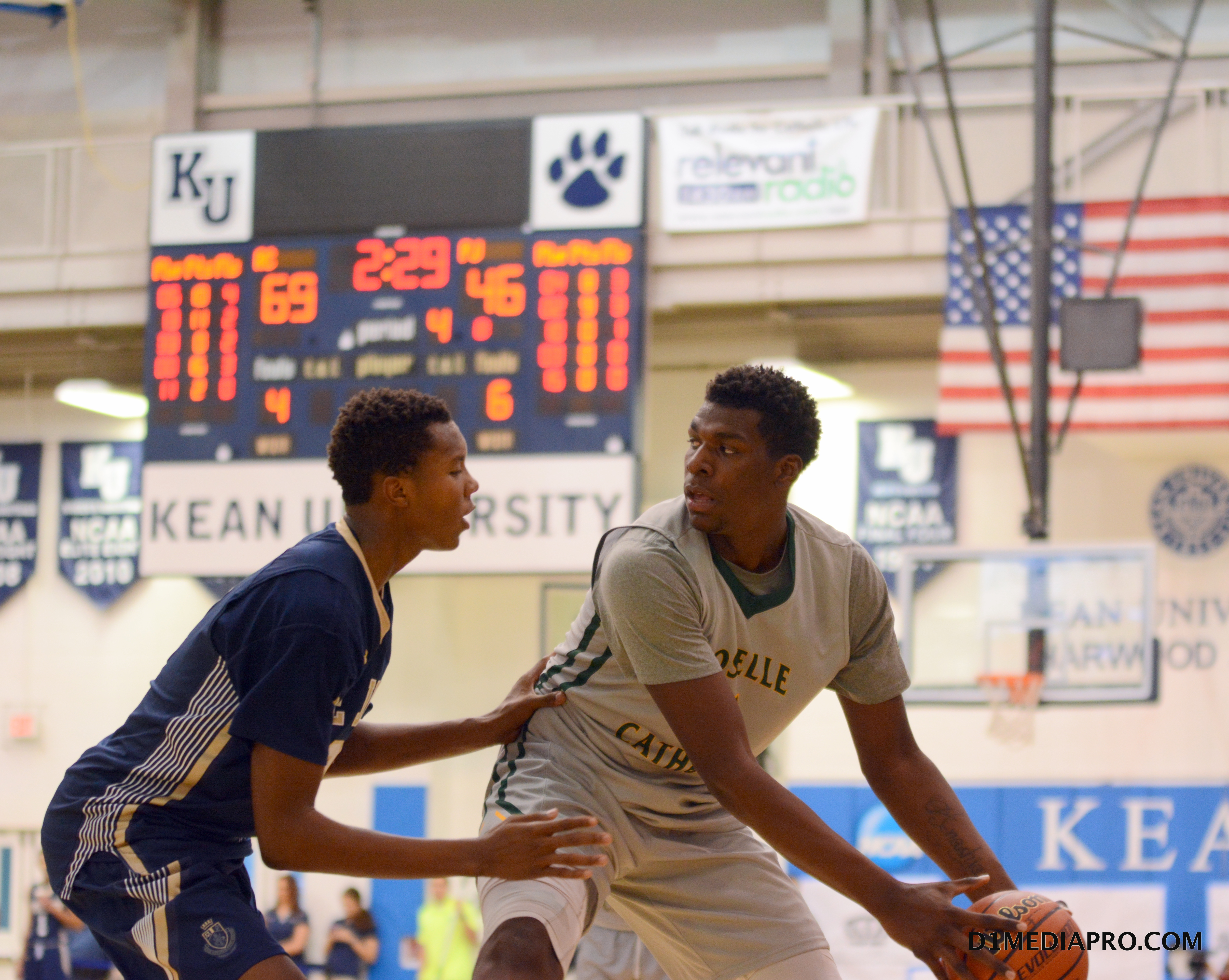 The 2017-18 high school basketball season in New Jersey tips off this weekend and, as usual, there are some fascinating storylines. Having spent 10 years covering high school and college hoops for New Jersey newspapers, I still have a soft spot for the state, especially the Non-Public B bracket which is always loaded with aura and mystique. New Jersey is rich in talent and over the past few years has produced two No. 1 NBA Draft picks in Kyrie Irving (St. Patrick’s) and Karl-Anthony Towns (St. Joe’s-Metuchen) as well as a No. 2 pick in Michael Kidd-Gilchrist (St. Patrick’s). Here are six key storylines to keep an eye on:   1-The Tournament of Champions seems fairly wide open Some years in New Jersey a team seems almost pre-destined or pre-ordained to win the Tournament of Champions, which pits the state’s four Public and two Non-Public school champions in a winner-take-all state championship. Last year, The Patrick School was that team and they fulfilled their destiny, winning the school’s sixth TOC title and first after transitioning to The Patrick School from St. Patrick’s. That team featured six Division 1 players, including current Kentucky freshman Nick Richards, Minnesota frosh Jamir Harris and Seton Hall frosh Jordan Walker. In 2016, Bob Hurley’s St. Anthony’s team appeared like the TOC favorite from the jump, and managed to win it all despite losing five players 6-foot-7 or taller to transfer or injury. Asante Gist became the first player in Garden State history to win the TOC with two different schools, and Hurley won his 13th — and final — TOC. This year, however, it appears more wide open. Hudson Catholic is loaded with three high-major players in Luther Muhammad (Ohio State), Louis King (Oregon) and Jahvon Quinerly (uncommitted). They are ranked No. 4 nationally by MaxPreps and No. 8 in the USA Today Super 25.

Still, The Patrick School, Roselle Catholic and Ranney all figure to be in the mix for the TOC title as well. “It was a blessing to be ranked No. 4 in the country, but I think our mindset is just not to worry about that,” King told The Star-Ledger. “We just need to stay focused, be in the gym and get ready for the season.” “If their expectations are to win the Tournament of Champions, which is something they’ve talked about, we have a lot of work to do. We’re not even close to that,” said ninth-year head coach Nick Mariniello. “There are some really good teams in the state, there are some really good teams in our section. I’m not caught up in these national rankings. At the end of the day, you got to play the games and you got a target on your back. “Until you play games and they’re meaningful games, you really don’t know how they’re handling expectations.”   2. Oh by the way, almost all those teams are in the same bracket More often than not, the TOC winner comes out of Non-Public B. Consider that St. Anthony’s (13) and St. Pat’s/The Patrick School (6) have combined to win 19 of the 29 TOCs in history. That figures to happen in 2018, too, but whoever comes out of North Non-Public B will have survived a bloodbath given the NJSIAA’s reclassifications, which I first reported last month. The Patrick School, the defending New Jersey TOC winner, moves from South Non-Public B to the North, as do fellow powerhouses Roselle Catholic, Gill St. Bernard’s and St. Mary’s-Elizabeth.They join Hudson Catholic and Montclair Immaculate — both of which remain in the North — in a loaded North Non-Public bracket that will be extremely difficult to navigate come February and March. “I honestly can’t remember a bracket so loaded with top ranked teams and future D-1 players,” RC coach Dave Boff told ZAGSBLOG. “There is an amazing amount of talent in Parochial B, which historically is always a tough bracket but this year I think it’s as deep as ever with really good teams.” The exception is the Ranney School — which features junior studs Bryan Antoine and Scottie Lewis — who remain in South Non-Public B.

3. The state is loaded with D-1 commits and prospects As I’ve said and written many times, if you’re a college coach, you could fly into New York or New Jersey and hit half a dozen key schools and get your recruiting done for an entire year. This year is no exception as the state features an array of top commits and prospects. In addition to the Hudson Catholic trio of Quinerly/Muhammad/King… **Roselle Catholic has LSU-bound big man Naz Reid and Delaware-bound guard Ithiel Horton, plus a slew of younger prospects like Kahlil Whitney, Cliff Omoruyi and Josh Pierre-Louis.

**Ranney has Louis and Antoine, who are only being recruited by the likes of Duke, Kentucky, Florida and Harvard. **The Patrick School has a number of high-level prospects, including Class of 2019 guard Al-Amir Dawes and Class of 2018 forwards Valdir Manuel and Giorgi Bezhanishvili.

**Montclair Immaculate has Syracuse signee Jalen Carey. **Gill St. Bernard’s has juniors Paul Mulcahy and Khalif Battle, the younger brother of Syracuse sophomore Tyus Battle, who could be the next Jersey Boy taken in the NBA Draft. **Seton Hall Prep features sophomore forward Jabri Abdur-Rahim, who recently visited Kansas and is among the top players in his class nationally.

**Oh and don’t forget about St. Benedict’s Prep, which plays in the NJSIAA Prep bracket and has a loaded group that includes juniors Precious Achiuwa and Lester Quinones, two of the top players in the Class of 2019.

4. The St. Anthony’s kids hit the ‘dispersal draft’ With the closing of St. Anthony’s last spring, Hurley joked that his former players were involved in a “dispersal draft” around the state. Alexander Rice landed at Mater Dei, Savior Akuwovo joined forces with Antoine, Lewis and Alex Klatsky at Ranney and Horton ended up at Roselle Catholic. Read more about it in my New York Times story from the spring. A slew of other former St. Anthony’s kids are also sprinkled around the state and could link up during the state tournament. Meantime, Hurley is spending his days going around to watch his former players in high school and college, as I wrote in this Times piece.   5. There’s a new sheriff in town at Paterson Eastside In the wake of the human trafficking scandal at Paterson Eastside last year, the school cleaned house and hired Michael Baker as its new coach, as I first reported last month. Baker is the son of former Eastside coach Henry Baker Sr., and the brother of Rutgers cornerbacks coach Henry Baker Jr. It will be interesting to see how things go at Eastside since the Ghosts will continue to be under a microscope given what went down last year.   6. The schedule is stacked You can see all of these players and teams at a number of high-profile events throughout the year, including the Hoop Group Tip-Off event this weekend at Caldwell College.

?: The tradition of NJ Tip-Off #HGShowcase

We also recommend the Metro Holiday Classic and Metro Classic, the SFIC Basketball Festival, the Dan Finn Classic, the Jersey Shore Challenge and the Tom Richel Memorial Hoopfest for events in Jersey. The state’s top teams will also be on display at various national events, including the City of Palms Classic, the Hoophall Classic and the SNY Invitational. And finally, don’t forget that Kevin Boyle and his Montverde (FL) Academy team — featuring Duke-bound wing R.J. Barrett — come to Jersey in February for the Metro Classic at Kean University. Follow Adam Zagoria on Twitter And like ZAGS on Facebook