No. 8 UNC at No. 18 Duke: Key Storylines | Zagsblog
Follow @adamzagoria 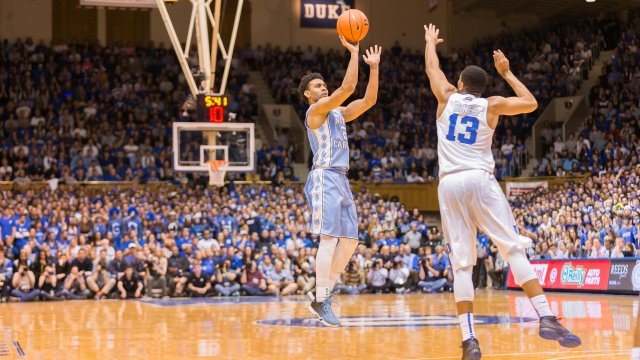 By MIKE McCURRY  College basketball’s greatest rivalry takes center stage on Thursday (8:00 ESPN), as No. 8 North Carolina visits No. 18 Duke in the 243rd installment of the Tobacco Road showdown. UNC leads the all-time series, 134-108, but Duke has won 11 of 15 meetings dating back to the start of the 2009-10 season. Chances are, if you’re reading this, you awoke Thursday with a Christmas morning feeling (and not because of the snow). Regardless, I encourage you to check out this short little pump-up video courtesy of the Duke men’s basketball Twitter account to further get your heart pounding for tonight’s game.

Here are the primary storylines surrounding this heavyweight ACC matchup: UNC has an opportunity to provide a knockout blow to Duke’s ACC title hopes. UNC leads the ACC with a 9-2 record, 2.5 games ahead of sixth-place Duke (6-4) with seven league contests remaining for both teams. A Tar Heels win on Thursday could essentially eliminate the Blue Devils from ACC regular season title contention. Will the Blue Devils continue to play small ball? Lately, Duke has been operating with Jayson Tatum at the “4” spot, pushing Harry Giles into a deep reserve role and Marques Bolden into relative obscurity. Though Tatum has struggled shooting the ball this season (31 percent on 3s), he has been able to exploit mismatches off the bounce from the power forward position. The five-star freshman is also a fine enough defensive rebounder (19.7 Defensive Rebounding Rate, according to KenPom) that allows Duke to survive defensively with a frontcourt consisting of the 6-foot-8 Tatum and 6-foot-9 Amile Jefferson. Head coach Mike Krzyzewski finds himself in quite the conundrum tonight. His best lineup is Grayson Allen, Luke Kennard, Tatum, Jefferson, and either Matt Jones or Frank Jackson, but playing small ball is a risky proposition against UNC, the best offensive rebounding unit in America. On the season, the Tar Heels have corralled 42.8 percent of their missed shots. In conference play, that figure has jumped up to 43.7 percent. To put that into perspective, the next best ACC offensive rebounding team in league games is Miami, at 35 percent. That’s incredible. Duke let Pittsburgh gather 36 percent of its misses on Saturday, and the Panthers also converted on a healthy 65 percent of their twos. Now, swap Jamel Artis, Michael Young, Sheldon Jeter, and Rozelle Nix for Justin Jackson, Isaiah Hicks, Kennedy Meeks, and Tony Bradley. Per ESPN’s Jay Bilas, UNC averages 18.4 second-chance points per night, the most among major-conference squads. The last thing Coach K wants is a repeat of last year’s Duke-UNC tilt at Cameron Indoor Stadium, when the Tar Heels ate glass all night long to the tune of a 64-29 rebounding advantage. Giles and Bolden may have to play larger-than-normal roles tonight should the Blue Devils prevail. Will Joel Berry break out of his mini-slump? Joel Berry is unmistakably one of the best point guards in the country, averaging 14.9 points, 4 assists, and 1.4 steals this year. But in the last six games, the 6-foot junior’s scoring average has dropped to 11.2 points due to inefficiency inside the arc (26 percent on twos) and the tendency to settle for three-pointers—62 percent of his field goal attempts have come from beyond the line over this duration. Berry, who along with Jackson cracked the Wooden Award Top-20 list, would love to put this mini-slump behind him against the enemy.

I appreciate how matter of fact Joel Berry is. From yesterday: "Since I've been here, I've had a great deal of hatred against Duke."

Is Grayson Allen himself again? A preseason All-American, Allen’s turf toe injury and (primarily) extracurricular activities have overshadowed—and in some ways have probably influenced—his decline in production this season. Lately though, the 6-foot-5 guard is performing to the level we all thought he was capable of back in the fall. Allen is averaging 20.3 points in his last three games, making 13-of-29 three-pointers and 14-of-14 free throws during this stretch. He’s not a point guard—which it appears the Duke coaching staff has finally come to terms with—making Frank Jackson and Matt Jones all the more indispensable as far as handling the ball and finding Allen and Kennard off screens. Speaking of Kennard (19.8 PPG, 5.2 RPG), you already knew he was a stud. But did you know the rate at which the southpaw is tearing up elite competition?

Will Theo Pinson be available? UNC’s Swiss Army Knife, Theo Pinson is questionable for Thursday after having missed the last three games with a right ankle injury. Pinson, who missed the first 16 games of the season due to a broken right foot, does a little bit of everything offensively (5.2 rebounds, 3.3 assists in 16.2 minutes) and is arguably UNC’s top defender. The Tar Heels are 6-0 this year when he suits up. Should the 6-foot-6 junior be able to go, expect him to check Tatum at times—a matchup that could determine the outcome of the game. Trevon Duval will be in attendance. Five-star high school senior Trevon Duval will be situated right behind Duke’s bench on Thursday as part of his official visit. Duval, who is considering Kansas, Arizona, Baylor, and Seton Hall in addition to the Blue Devils, is an explosive 6-foot-3 point guard currently playing at IMG Academy in Florida. The Delaware native is expected to sit with Duke commits Wendell Carter and Gary Trent Jr., who will undoubtedly attempt to persuade Duval to join the Blue Devils’ 2017 class. Duke, which lost out on Matt Coleman (Texas) and Quade Green (Kentucky), desperately needs an incoming point guard, and Duval clearly fits that bill. Photo: @UNC_Basketball Follow Mike on Twitter Follow Adam Zagoria on Twitter And like ZAGS on Facebook