No. 11 Oregon Loses Brooks in Win over California 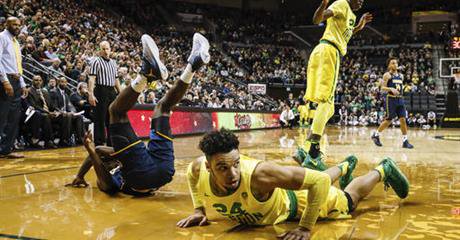 By RON RICHMOND EUGENE, Ore. (AP) — Jordan Bell scored a career-high 26 points, Casey Benson had 15 on five 3-pointers and No. 11 Oregon rolled to an 86-63 victory over California on Thursday night. The Ducks (17-2, 6-0 Pac-12) matched a 104-year-old school record with their 15th consecutive win, but they lost preseason All-America Dillon Brooks to a lower leg injury late in the first half. Brooks, who had offseason surgery on his left foot, limped off the court as Oregon was building a 44-30 halftime lead. Oregon officials tweeted that Brooks had injured his lower left leg after he did not appear with his teammates for the second half. “Guys are gonna have to step up,” Ducks coach Dana Altman told reporters. “We’ve got good players, and we’ll just keep playing.” Bell took up the scoring slack by shooting 11 of 12 from the field to go with six rebounds and four blocked shots. Jabari Bird had 21 points to lead the Golden Bears (13-6, 4-3), who had won three straight and eight of their last 10 meetings with the Ducks. After two quick fouls on starter Payton Pritchard, Benson came off the bench to hit four straight 3-pointers as Oregon connected on 9 of 15 beyond the arc in the first half. Tyler Dorsey, the Ducks’ best long-range shooter, turned playmaker in the first half with five of his six assists. He scored 13 points in the second half to finish with 16. “[Brooks] is a big asset to our team, but we have to get ready not knowing what’s happening with him,” Dorsey said. “We’re finding our groove lately, and we gotta keep it going.” BIG PICTURE California, at 4-3, needs a split of its Oregon road trip to keep contact with conference’s top three of Oregon, Arizona and UCLA. Oregon, which has won a school-record 37 games at home, may have to adjust its starting lineup for the fifth time if Brooks isn’t able to play Saturday. The Ducks were 7-0 since Brooks replaced Chris Boucher as a starter. UP NEXT California goes for its second Pac-12 road win at Oregon State on Saturday. Oregon finishes a three-game home stand against Stanford on Saturday. (AP Photo/Thomas Boyd)

Oregon's Dillon Brooks Ejected for a Kick Below the Belt