Oregon’s Dillon Brooks Ejected for a Kick Below the Belt 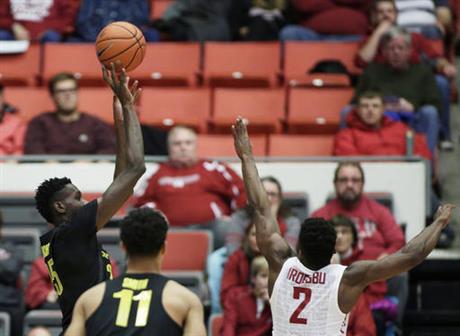 By NICHOLAS K. GERANIOS
PULLMAN, Wash. (AP) — Dylan Ennis acknowledged that it was a little shocking for No. 15 Oregon to lose its leading scorer just six minutes into the game against Washington State. Dillon Brooks was ejected with 13:20 left in the first half for kicking Washington State’s Josh Hawkinson during a scramble for a rebound. “You don’t normally have your best player go out so early in a game,” Ennis said. “But we are a deep team.” Chris Boucher scored a career-high 29 points off the bench as Oregon beat Washington State 85-66 on Saturday for its 13th straight victory.

Here’s the video of Dillon Brooks’ Flagrant 2 foul that resulted in ejection w/replay. Does it look intentional to you? #GoDucks #UOvsWSU pic.twitter.com/x109zkR4UZ

Ennis added 17 points for Oregon (15-2, 4-0 Pacific 12). “Me and Chris took it upon ourselves to get the team going,” Ennis said. “Just staying together, that’s the biggest thing.” Oregon’s Jordan Bell said the Ducks realized early that Boucher had the hot hand. “Everybody was looking for him,” Bell said. “He gave us a big lift.” Four players scored in double figures for Washington State (9-6, 2-1), which had its four-game winning streak snapped. Ike Iroegbu led the Cougars with 12 points. “It was our third game in seven days,” Washington State coach Ernie Kent said. “I felt like our legs left us, our mental sharpness left us. “Our rotations weren’t there on defense and that’s too good of a team to give open looks to.” Washington State led 16-15 when Brooks was called for a flagrant foul on Hawkinson. Brooks had already scored seven points, half his average. Boucher filled the void, shooting 6 of 9 from 3-point range and adding eight rebounds and three blocks. The teams, who were tied at 37 at halftime, traded baskets in the early minutes of the second half until consecutive 3-pointers by Ennis and Roman Sorkin gave Oregon a 53-48 lead. Ennis sank another 3 to give Oregon a 59-50 lead with 10:33 left. A 3 by Boucher pushed the Ducks’ lead to 13, and Oregon rolled to victory. The Ducks outscored Washington State 48-29 in the second half, when they shot 63 percent from the field. “In the second half, our guys really responded well,” Oregon coach Dana Altman said. “We had 12 assists in the second half.” Oregon leads this long-running series 167-124. This is the only meeting this season between the teams. BIG PICTURE Oregon: The Ducks have held all but two opponents under 70 points this season, and lead the nation with an average of 7.5 blocks per game. Washington State: The Cougars had opened conference play 2-0 for the first time since the 2007-08 season, and hoped to go 3-0 in league for the first time since the 1987-88 season. Kent previously coached the Ducks for 13 seasons. STATS Oregon sank 13 of 25 from 3-point range (52 percent). That nearly matched its field goal percentage of 54 percent. Washington State shot 50 percent from the field. FEW TURNOVERS Oregon committed just six turnovers in the game, while producing 18 assists. UP NEXT Oregon: hosts Oregon State next Saturday. Washington State: plays at Stanford next Thursday. Follow Adam Zagoria on Twitter And like ZAGS on Facebook

No. 11 Oregon Loses Brooks in Win over California