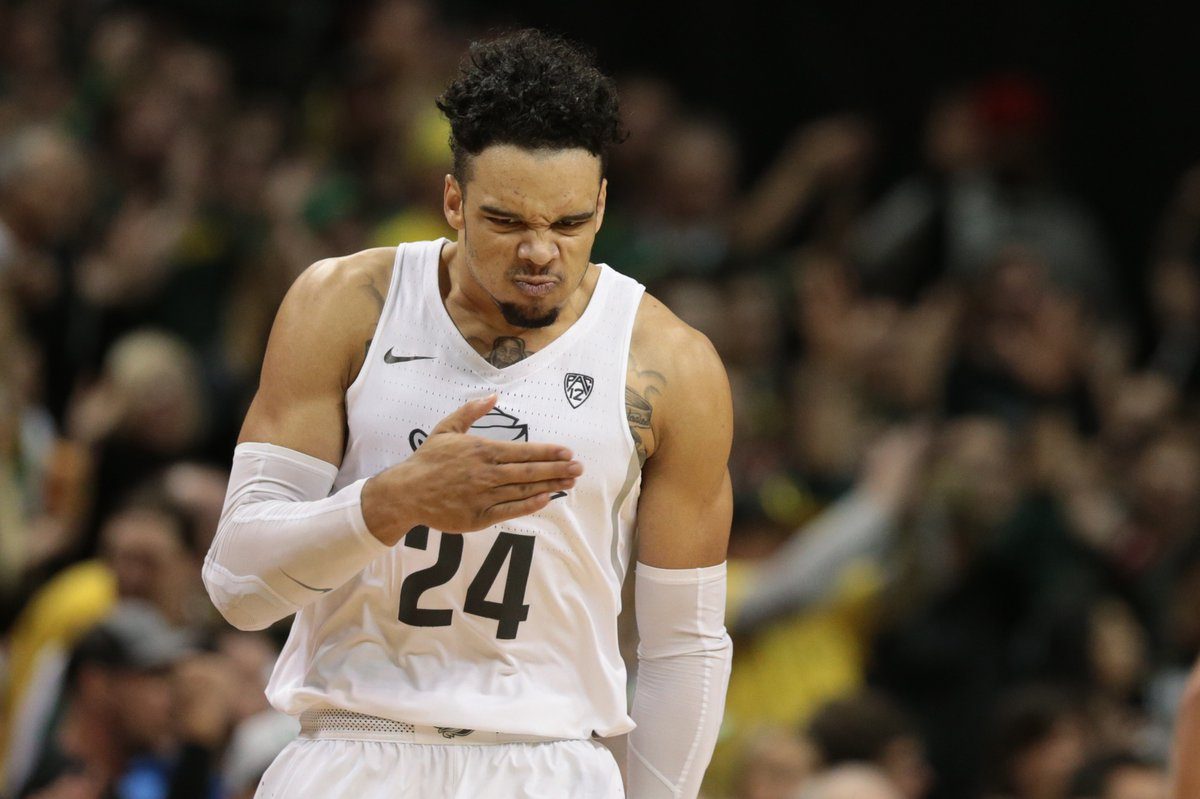 By MIKE McCURRY UCLA is no longer undefeated, and that’s a direct result of Oregon’s Dillon Brooks no longer being restrained. Brooks, who missed the first three games this year and was limited in many others due to a foot injury, logged season-highs in minutes (35), points (23) and rebounds (9) on Wednesday. His game-winning, off-balance three-pointer with 0.8 seconds left was the difference in No. 21 Oregon’s thrilling, come-from-behind 89-87 victory over No. 2 UCLA, handing the Bruins their first loss in the process.

UCLA led 87-83 on a Lonzo Ball layup with 24 seconds to go. Oregon responded by scoring the final six points of the game via a pair of three-pointers. The first of those was by freshman Payton Pritchard, who turned in his best collegiate performance to date: 15 points, 9 assists, and 1 turnover. Then, after Bryce Alford (20 points, 6-10 3FG) back-rimmed the front end of a one-and-one with UCLA clinging to a one-point advantage, it was Brooks who got the rock, created all the separation he needed on a Jordan Bell ball-screen, and buried the triple that sent Matthew Knight Arena into a frenzy. “A sold-out crowd, a No. 2 team,” said Brooks postgame on SportsCenter. “I really wanted to get on the right foot in the Pac-12, and it just feels really good.” It’s ironic that Brooks, the first Duck to ever appear on the preseason All-America team, used the word “foot” during his state of euphoria. After all, it was that July foot surgery that inhibited the 6-foot-7 wing from being his usual self early on this season. Thankfully for Oregon, its star finally appears at or close to 100%. “What’s going thru my mind right now is just a lot of success and a lot of greatness,” Brooks said. “I want to do this for all of Oregon, and I wanted to protect home court.” Mission accomplished, as the Ducks extended their home winning streak to 34 consecutive games. They also took a major step toward repeating as Pac-12 regular season and tournament champions. And oh, by the way, mark your calendars: the Oregon-UCLA rematch is February 9th.       Photo: Bleacher Report Follow Mike on Twitter Follow Adam Zagoria on Twitter And like ZAGS on Facebook

Oregon's Dillon Brooks Ejected for a Kick Below the Belt