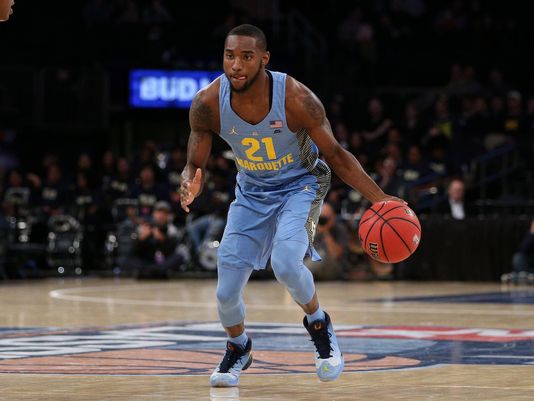 Former Marquette guard Traci Carter committed to La Salle after visiting the school this weekend, his guardian, Donnie Carr, told ZAGSBLOG. Carter, who also visited Iona, will sit out next season and be eligible in 2018-19, Carr said. The 6-foot point guard from Philadelphia appeared in eight games this season, including four starts, averaging 4.3 points, 3.6 assists and 2.1 rebounds in 16.3 minutes. “Traci loved his visit to La Salle,” Carr said. “He loves the coaching staff, his future teammates and everyone in the program. “He loves the style of play. He thinks they will have a chance to win a lot of games and he thinks the coaching staff can help him develop into a great college point guard.” Carter missed Marquette’s final two games before their break for final exams due to left knee soreness, per the Milwaukee Journal-Sentinel. He said he wanted to transfer to be closer to home. “A big factor that played into me transferring is my family,” Carter told the Journal-Sentinel earlier this month. “I wanted to be closer to my family. There’s an old saying, ‘Nothing lasts forever.’ So I think it was just my time to go. … “It’s been tough being away from my family, so far (away). I miss them a lot, so that’s been tough. There’s been some problems back home.” Photo: JSOnline.com