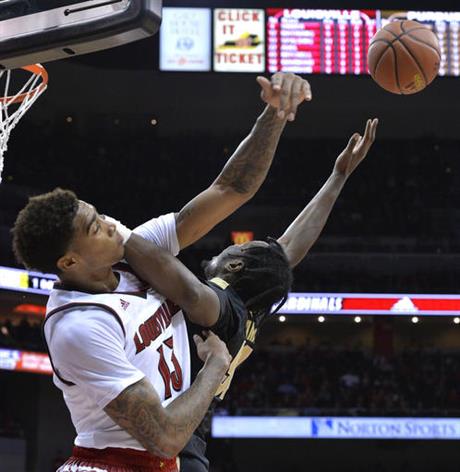 By GARY B. GRAVES LOUISVILLE, Ky. (AP) — Baskets fell when Louisville needed them, but coach Rick Pitino was more pleased by the defense that created those timely opportunities against Purdue’s fierce rally. Nearly every Cardinal had a hand in the effort, literally and figuratively, to gut out a tough win. Ray Spalding and Mangok Mathiang each scored 11 points and Donovan Mitchell had critical points and rebounds down the stretch to help No. 14 Louisville hold off No. 15 Purdue 71-64 on Wednesday night in the ACC/Big Ten Challenge Seeking a rebound from their second-half collapse against Baylor in the Battle 4 Atlantis championship when they lost a 22-point lead, the Cardinals held Purdue to a season-low 36 percent shooting but needed key baskets in the final minutes as the Boilermakers cut a 51-33 deficit to four with 14.4 seconds left. Ryan McMahon’s 3-pointer with 4 minutes remaining helped along with Mathiang’s layup with 2:30 left, but Mitchell’s late scoring, including a jumper then two free throws with 2 seconds left, helped the Cardinals (6-1) escape with their first win over Purdue since 1996. Mitchell finished with five rebounds with the final one setting up his game-clinching free throws. Louisville’s 32-18 advantage in the paint was big with Anas Mahmoud adding nine points. He fouled out with 1:41 left. Spalding had nine rebounds and Mathiang eight as the Cardinals edged the Boilermakers 36-34 on the boards. “I definitely think our length and athleticism bothered them,” Spalding said after recording season highs in points and rebounds. “They were really big guys, really good basketball players. … We just had to use our quickness against them.” Caleb Swanigan had 14 second-half points and 11 rebounds and P.J. Thompson scored 13, but the Boilermakers (5-2) had their four-game winning streak stopped along with a conference-record seven-game winning streak in the Challenge. Swanigan’s scoreless first half symbolized Louisville’s effectiveness that carried over into getting the needed late stops as Purdue cut into its lead. “We trapped. We fronted. We went after it really hard,” Pitino said. “The guys really focused on the game plan. We knew how tough they are and they wanted to stay in the game, but Ray is the length guy. When Ray pressures the ball up top, they can’t get the high-low.” THE BIG PICTURE Purdue: The Boilermakers entered ranked seventh in assists at nearly 20 per game but had just five in the first half and finished with 13. A perimeter game that started just 4 of 12 in the first half improved to 6 of 11 in the second en route to finishing above 43 percent for the fifth straight game. Their 17 turnovers led to just 11 Louisville points, but coach Matt Painter wasn’t happy with the mistakes. “Just a lack of concentration with those 10 (first half) turnovers,” he said. “We have experienced players turning the basketball over. We have to do a better job of concentrating and making easy plays and getting good shots in the half court.” Louisville: The Cardinals pushed the tempo from the start and their defense forced 10 first-half turnovers against Purdue’s height. They forced 17 turnovers overall and shot 48 percent. … Pitino used his bench early, playing 12 in the first half alone. “That depth was really important because of the style we play,” graduate transfer guard Tony Hicks said. “If we’re able to play 12 guys, that just means we’re able to work harder and that’s important in speeding teams up and turning them over on the defensive end.” POLL IMPLICATIONS Louisville figures to remain the same depending on what happens at Grand Canyon. Purdue shouldn’t drop much with a loss to the No. 14 team. UP NEXT Purdue: The Boilermakers will face their second straight Kentucky school when they host Morehead State on Saturday in their first meeting since 1985. Louisville: The Cardinals travel Phoenix to face Dan Majerle-coached Grand Canyon on Saturday night. They won last year’s inaugural meeting 111-63. (AP Photo/Timothy D. Easley)

No. 20 Baylor Rallies From 22 Down to Top No. 10 Louisville in Bahamas