After Sitting Out as a Partial Qualifier, St. John's Point Guard Marcus LoVett is Ready to Roll | Zagsblog
Follow @adamzagoria

After Sitting Out as a Partial Qualifier, St. John’s Point Guard Marcus LoVett is Ready to Roll 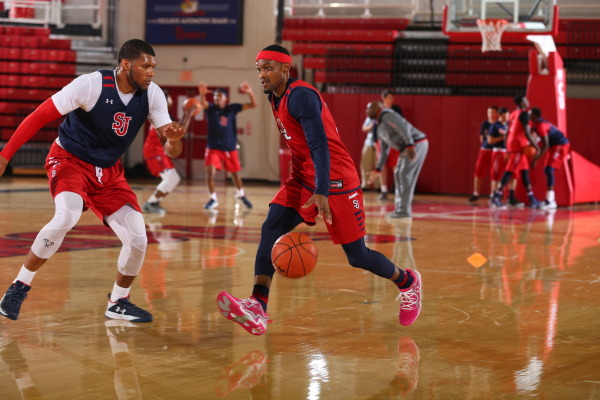 NEW YORK — Chris Mullin doesn’t know how many more games St. John’s would have won last year if Marcus LoVett had been eligible and healthy to play point guard. Mullin figures it probably would have been more than the eight St. John’s did win in his first season as head coach, but he doesn’t want to think too long about it, either. “Who knows, it’s hard to tell,” Mullin, whose team was picked to finish eighth in the 10-team Big East, said Thursday at St. John’s Media Day. “It’s hard to tell. Look, a lot of times things happen and at the time you’re saying ‘Why?’ but then in the long run it will kind of work out. So I think it’s probably more important how we dealt with that to get to this point and now we’ll answer those questions now.” After the 6-foot LoVett sat out last season as a partial qualifier, now begins on Halloween Night when he makes his debut in an exhibition game against Baruch at Carnesecca Arena. The Johnnies then play Rhode Island in a “secret scrimmage” next weekend before opening the regular season Nov. 11 against Bethune-Cookman. LoVett cannot wait to get started. “I’m looking real forward to playing this year,” he said. “This is a big year for us to turn the program around, just coming off of last year, how we did. I think this year’s team is real special.” Mullin, in turn, cannot wait to get LoVett out on the floor with the new-look Johnnies. “He’s got so  many different skills,” he said. “I think the biggest is speed, his ball-handling, he’s really, really unselfish, very meticulous in his preparation. He wants to execute exactly, wants to be efficient. His ball-handling, his speed and his vision are pretty unique. He’s had big scoring nights but I think he likes to pass. I think he really loves to get his teammates involved first and foremost.” When I asked Mullin if LoVett compared to any NBA or college guards, he said “Someone recently said he reminded them of Kenny Anderson maybe because he’s lefty. You can go up and down the line of small guards who can have a big impact on the game, maybe small in stature but in the last 5, 10 years those guys have had a big impact.” LoVett was a four-star, consensus top-25 point guard who finished up at Morgan Park High School in Chicago where he was a First Team All-State selection by the Chicago Tribune. He finished fourth in the statewide vote for Mr. Basketball in 2015 after averaging roughly 25 points, eight rebounds and seven assists per game. LoVett led his team to a third place finish at the state tournament in 2015 and set an Illinois Class 3A playoff record posting 45 points on 20-of-27 shooting in the semifinals. LoVett didn’t want to talk about how difficult it was sitting out last season but he knows how tough it was on Mullin and his teammates to finish 8-24, 1-17 in the Big East in his absence. “I can tell it was a little bit tough on him, just seeing him go through what he had to go through,” LoVett said.”But all of it happens for a reason. I think he can go home at night and sleep better knowing that the team will be a lot different.” While Federico Mussini, a natural shooting guard, was forced in to point guard duties last season, Mullin now has a plethora of options in the backcourt. In addition to LoVett and Mussini, St. John’s returns 6-6 New Jersey native Malik Ellison and brings in 6-1 former Brooklyn Thomas Jefferson star Shamorie Ponds. Ponds and LoVett have become friends and Ponds is a fan of LoVett’s game. “He brings leadership,” Ponds said. “He has a strong personality even though off the court he doesn’t talk a lot, but he brings a strong personality and he’s going to help us get where we want to go this year.” When LoVett plays the point, Ponds can shift off the ball. “In practice we’ve been playing together and against each other so [Mullin’s] been seeing which lineups work and who works better with each other,” Ponds said. “I believe myself and the three of them, we play well together.” Mullin has experimented with some three-guard lineups with LoVett, Ponds and Mussini plus former junior college star Bashir Ahmed on the wing and 7-footer Yankuba Sima down low. St. John’s also can go small with a lineup of LoVett, Ponds, Ellison, Ahmed and sophomore Kassoum Yakwe at the 5. “I’ve tinkered with a lot of diff combinations,” Mullin said. “They all offer something. They’ve done a good job of functioning in that lineup. The biggest thing is the spacing. We want to play with pace all the time but understanding when to attack, when to get in the pick-and-rolls.” The good thing about sitting out last year was that LoVett spent a lot of time seeing the game from the coach’s perspective and talking to Mullin. “If I was walking up and down the sideline, just really pointing things out because we worked on them in practice,” Mullin said. “Of course a lot of times I was saying [to LoVett], ‘We want to do this and quite frankly I thought you would’ve been able to do it but we’ll have to wait.'” Now the waiting is over and the Marcus LoVett Era can begin. “We’re just ready for this year’s season,” LoVett said, “and we’re just ready to get rolling,” (Photo courtesy St. John’s Athletics) Follow Adam Zagoria on Twitter And like ZAGS on Facebook