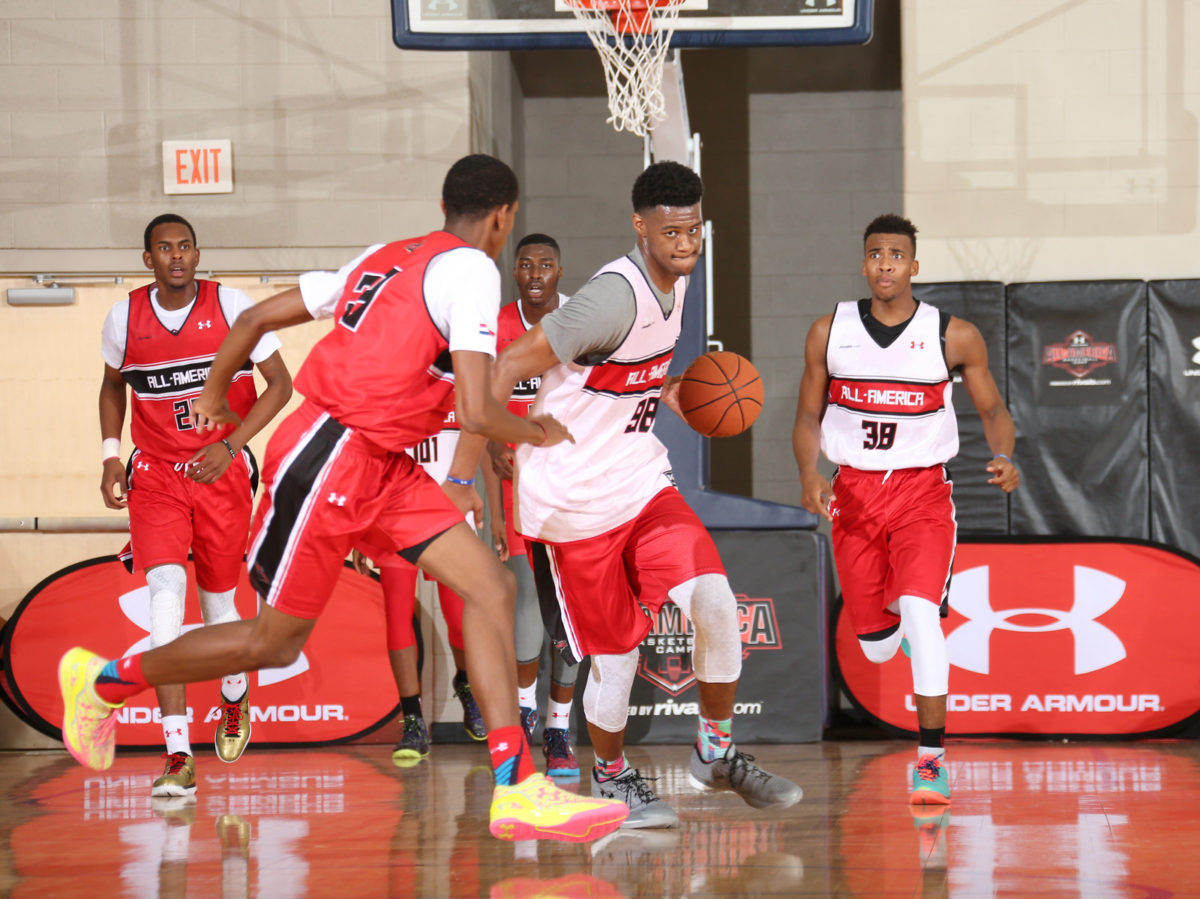 Syracuse did pretty well with one fella from Oak Hill Academy (VA). You may have heard of him. Goes by the name of Carmelo Anthony. Now head coach Jim Boeheim and his staff are targeting another long forward from the prestigious prep power: 6-foot-9, 237-pound Billy Preston. “Of course, it’s Melo, he went there and made a big impact,” Preston said Sunday evening by phone. “So they did [mention him] and they said I could be that type of player there and have the same type of role he did. I watched footage on him while I was there and I saw the things he did and I really enjoyed it. Comparing my game to his game and comparing it to future reference, how they said they would play me and where I could see myself, it was all good.” Syracuse assistant Adrian “Red” Autry told Preston that he could be the difference between Syracuse making the NCAA Tournament and making a deep run. Anthony, of course, led the Orange to their only title in 2003. “Me being a versatile player, Coach Boeheim and Coach Autry told me I could come right in and make an impact,” Preston said. “Coach Boeheim told me himself that if I came I would be one of the best scorers on the team. He’s not going to limit me, he’s going to let me play, so just the whole thing was them telling me about how Syracuse basketball is the perfect fit for me and their style of play is just for me. They said I would strive in it. “Coach Autry told me that making the [NCAA] Tournament is a given but with me and possible other recruits to join the program that they could not only make the tournament but go even farther than that and hopefully win the whole thing.” Asked how seriously he is now considering Syracuse, Preston said:  “I’m definitely considering them serious now. I don’t think I would’ve taken the visit if I wasn’t serious about Syracuse or any school that I’ve taken a visit to so I would say I’m really serious about that.” Preston has taken the SAT and has his 10 core courses. A California native, Preston is considering Syracuse, Kansas, Indiana, USC and Kentucky, he said. Next up is an official to Indiana next weekend. “Coach Tom Crean is a good coach, he’s a really hands on coach and he’s going to really help you,” Preston said. “Help you develop. When he came to visit me at Oak Hill, I could just tell that he wanted me to be a lot better because he started breaking down my game to me and telling me how I could improve this and improve that. And he seemed like he really wanted the best for me and the future of me on the basketball court.” As for Kansas, Oak Hill point guard Matt Coleman recently told ZAGSBLOG that the Big 12 school is recruiting the two of them as a package, although Coleman did not go on his visit there this weekend and more focusing on Duke, Texas and Stanford. “I talked to Matt about it before but like I said, we have no clue where we want to go,” Preston said. “It was just a possible idea, possible thing that we talk about as young basketball players. So that’s basically how that conversation went about how things might look or might not look.” As for Kentucky, associate head coach Kenny Payne was in to see him recently. “Yeah, I’ve been in touch but I’m still waiting on an offer,” Preston said. “They said they’re happy that I got out of the situation that I was in before [at API] and I’m definitely going to strive at Oak Hill and have a great season. And that I’m going to start hearing from them more often now, and that was it.” At this point, Preston will likely sign late. “Most likely, I’m going to wait till the spring,” he said. Preston is ranked No. 20 in the Class of 2017 by ESPN.com and No. 16 by Scout.com, but Oak Hill coach Steve Smith isn’t buying it. “He’s [a] top-5 [player] in the country, I don’t care what scouting services say,” Smith said of Preston. “Nobody has his skill level and upside at 6-9. He can score off the bounce, get to the rim, shoot the three, and pass and handle like a guard.” Follow Adam Zagoria on Twitter And like ZAGS on Facebook