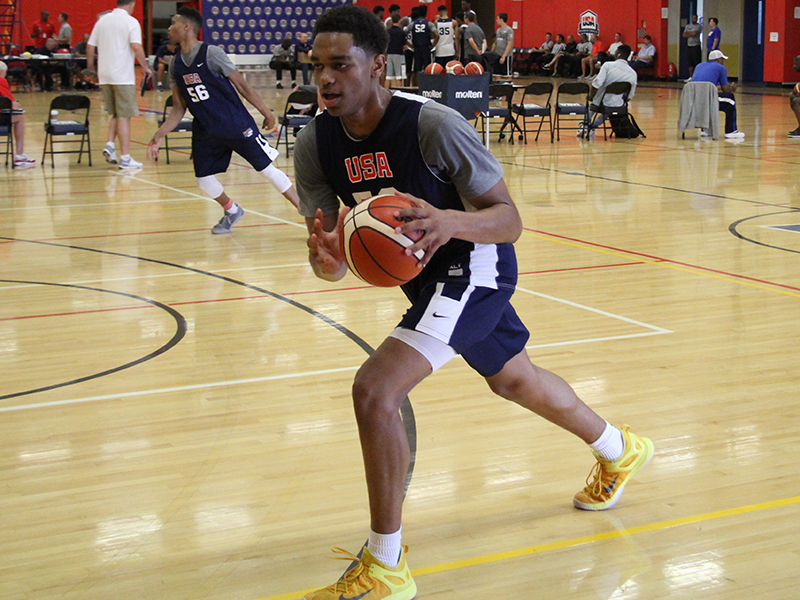 P.J. Washington, the 6-foot-8 forward from Frisco, Texas and Findlay Prep (NV), enjoyed his weekend unofficial to Kentucky for Big Blue Madness and is now focusing on four schools. Kentucky, Arizona, North Carolina and UNLV remain under consideration, while Texas is out. UNC’s Roy Williams and Kentucky’s Kenny Payne were both expected to visit with Washington on Tuesday. Washington attended Kentucky for a second time following an official visit in September, and was at Big Blue Madness along with fellow Class of 2017 stars Mohamed Bamba, Quade Green, Trae Young and Kevin Knox. “It was an unofficial for him so we didn’t really spend a lot of time with coaches,” said Paul Washington Sr., the Findlay Prep coach and P.J.’s father. “It was good. The only thing we were looking for is the fans, that old Big Blue Nation. There was definitely a lot of people for sure.” Kentucky brought out a slew of former players for the event, including current NBA guys John Wall, Boogie Cousins and Willie Cauley-Stein. “I think every high school kid looks at the college that they want to go to and how many people they have in the pros and the one thing that that stands out with Kentucky is [John] Calipari puts them in the league at a rapid rate,” Paul said.  “I heard somebody say that most coaches probably don’t have five players in the league, he’s got five people on one team in Phoenix. So that’s big-time, that’s big-time.” Having already taken an official to UNC, Washington will now visit Arizona next weekend following their Red-Blue Game last weekend. Arizona hosted an impressive group of players this past weekend, including 7-footer DeAndre Ayton, the potential No. 1 pick in the 2018 NBA Draft. “We’ll go see them this weekend,” Paul said. “He likes playing with DeAndre. He played with him in a couple of all-star games over the years and they like each other. I know they communicate. P.J.’s a team player so that’s someone who will take the burden off of him. That looks like a good option and he wouldn’t have to travel that far from where we are out here on the West Coast.” Texas, which had been in Washington’s top five, is now out. “It was just a matter of we couldn’t quite get the visit on the dates that we needed to get them,” Paul said. “And at the end of the day, they decided to go in a different route. They already have two people at his same position so I get it.” Meantime, Washington is looking at taking an official to UNLV the first weekend in November (Nov. 3-5). “He might take an official visit to UNLV as well,” Paul said. “I like their coach, Marvin Menzies. His personality, he’s real people-oriented. He’s made a real effort since he’s gotten the job to make the local kids in Vegas a priority, especially P.J. So it’s think it’s only fair to give them a look. He’s behind the eight ball, believe me he knows that. But I like his personality.” As for when P.J. might decide, Paul said: “When he gets it all figured it out he’ll make a decision.” Follow Adam Zagoria on Twitter And like ZAGS on Facebook