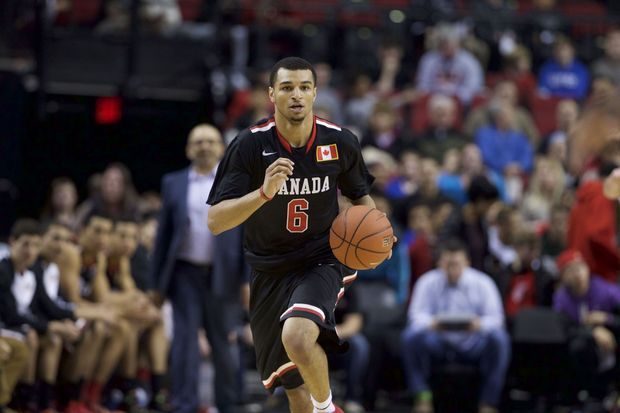 By JOSH NEWMAN For three quarters on Friday night, Kentucky freshman point guard Jamal Murray was quiet for the Canadian National Team in a Pan American Games semifinal against the United States. Then, the 18-year-old erupted. Murray scored all of his 22 points in the fourth quarter and overtime to help Canada defeat the United States, 111-108, in front of a pro-Canada crowd at the Ryerson Athletic Center in Toronto. Kentucky coach John Calipari, who landed the 6-foot-5 Murray in June after he reclassified to the Class of 2015 from 2016, was understandably pleased.

Couldn’t be more proud of @BeMore27. For someone his age to do what he did shows how good he is and why we wanted him in the worst way.

Murray, who was held back from participating in the FIBA Under-19 World Championships with an eye on having him play up a level at Pan Am, added six assists four rebounds. Orlando Magic forward Andrew Nicholson was dominant inside, finishing with a game-high 31 points and 10 rebounds. “I know one thing, Jamal Murray is going to be on the floor,” ESPN’s Fran Fraschilla said during the broadcast as the topic turned to Kentucky having three points guards next season in Murray, sophomore Tyler Ulis and freshman Isaiah Briscoe. Canada will face Brazil for the gold medal on Saturday back at Ryerson. That game is set for a 4:30 p.m. tip-off on ESPN2. Canada has not medaled in any international competition since taking silver at the 2001 FIBA Americas Championship. Regardless of the outcome Saturday, it will be Canada’s best Pan Am Games finish ever. After Saturday, attention will turn to next month’s FIBA Americas Championship where the top two teams will qualify for the 2016 Rio Olympics. Canada has not qualify for the Olympics since the 2000 Sydney Games when Steve Nash paced the National Team to a seventh-place finish. Murray, who is averaging 17.0 points per game at Pan Am, could be in the mix for the Canadian team going to FIBA Americas. Most, if not all of Canada’s top NBA players are expected to be available for the event including Andrew Wiggins, Tristan Thompson, Cory Joseph, Anthony Bennett, Tyler Ennis, Kelly Olynk and Nicholson. Meantime, Fraschilla says fans of USA Basketball shouldn’t freak out over the loss.

People freaking out on Twitter about @usabasketball loss to Canada. We’re light years away from 2004 & light years ahead of world. Trust me.