NORTH AUGUSTA, S.C. — Kassoum Yakwe and his PSA Cardinals teammates are a perfect 5-0 entering Saturday night’s Peach Jam quarterfinal matchup with Team Takeover. The 6-foot-7, 205-pound power forward from Our Savior New American and the reigning Nike EYBL Defensive Player of the Year, Yakwe has led the Peach Jam through pool play in both rebounds (11.8) and blocks (5.6). So it’s no surprise that he has attracted numerous coaches here. One source close to Yakwe said St. John’s, Kansas and Oregon are “working very hard on Kassoum.” As previously reported here, Yakwe is targeting a decision soon after Peach Jam on what he will do next year. Yakwe could end up on a college campus in 2015 or attend prep school for one season. The source previously said they are “leaning toward prep” for 2015-16, with Yakwe going to college beginning in 2016. Meantime, PSA Cardinals coach Terrance “Munch” Williams raves about Yakwe’s play. “Kassoum’s getting better and better each day,” Williams said. “At times he’s been overshadowed because he’s been playing behind All-Americans last year, but when he’s on the floor he’s obviously one of the best defensive players in the country. His offense is coming along. He got a good 15-foot jumper, he’s obviously athletic, and he affects the game in multiple facets. You can move him around, he’s just an all-around great player. “Regardless of where he goes because of his effort and energy, he’s going to be a great basketball player.” SYRACUSE WATCHES AS BATTLE DEBUTS FOR NEW HEIGHTS

Syracuse assistant Red Autry watched Tyus Battle make his debut with New Heights at the Under Armour Association finals in Suwanee, Ga. The 6-foot-6 Battle went for 15 points, 5 rebounds and 3 assists in a blowout win, his first game since switching over from Team Final, which played in the Peach Jam. Battle recently decommitted from Michigan and visited Syracuse. It remains unclear what his next recruiting trip will be, but Duke, Kentucky, Louisville and Ohio State were all involved before the Michigan commitment. Meantime, Gannett New Jersey reported St. Joe’s-Metuchen High School would be willing to waive its transfer rule if he wanted to transfer to play with his younger brother, Khalif. Tyus Battle is also believed to be considering Roselle (N.J.) Catholic after leaving Gill St. Bernard’s. “We don’t know if his brother is going to be there (at St. Joseph), let alone Ty,” his father Gary Battle told the paper. “We haven’t decided on what they are going to do. It’s a family decision.” SHAMORIE PONDS SAYS A FEW WORKING HARDEST

The New York Lightning finished a disappointing 1-4 in pool play at Peach Jam, but numerous coaches watched the team’s stable of young players, including 2016 Brooklyn (N.Y.) Thomas Jefferson guard Shamorie Ponds. Ponds said St. John’s, Seton Hall, Temple, Xavier and DePaul were recruiting him the hardest, and all those schools watched him here. “I don’t have a final list yet, I’m equal all my schools,” he told SNY.tv. “I show a lot of interest in all of them.” St. John’s has made Ponds one of their priorities in the Class of 2016. “Coach [Chris] Mullin, he’s a helluva coach, Hall of Famer and he’s going to bring NBA players there and that’s where I want to go,” Ponds said.” Seton Hall also repeatedly watched Ponds, with head coach Kevin Willard and assistants Shaheen Holloway and Fred Hill in the mix. “[Assistant coach] Tiny Morton coached against me in high school, so we have a connection,” Ponds said. DIMENCIO VAUGHN SHOWS IMPROVEMENT 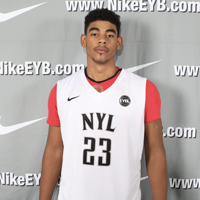 Dimencio Vaughn is an athletic, strong-bodied 6-5, 220-pound 2016 small forward from The Master’s School and the NY Lightning who has opened some eyes. Monmouth and Hofstra were his two main schools, but Canisius head coach Jim Baron also scouted him here. “Right now my recruitment is just starting to get back to where it should be, but there was Monmouth and Hofstra,” he told SNY.tv. “They were coming at me very strong.” As for Monmouth, he said, “Their academic schedule is pretty good. They make sure you’re always in class. They pay attention to that more than basketball, which is good. On Hofstra: “They have a nice program, period.” Asked about Canisius, he said, “I think they also offered me as well.” Vaughn said he had no timetable on making a decision.

Jayson Tatum to Duke, Could Harry Giles Be Next?