Jayson Tatum to Duke, Could Harry Giles Be Next? | Zagsblog
Follow @adamzagoria

Jayson Tatum to Duke, Could Harry Giles Be Next? 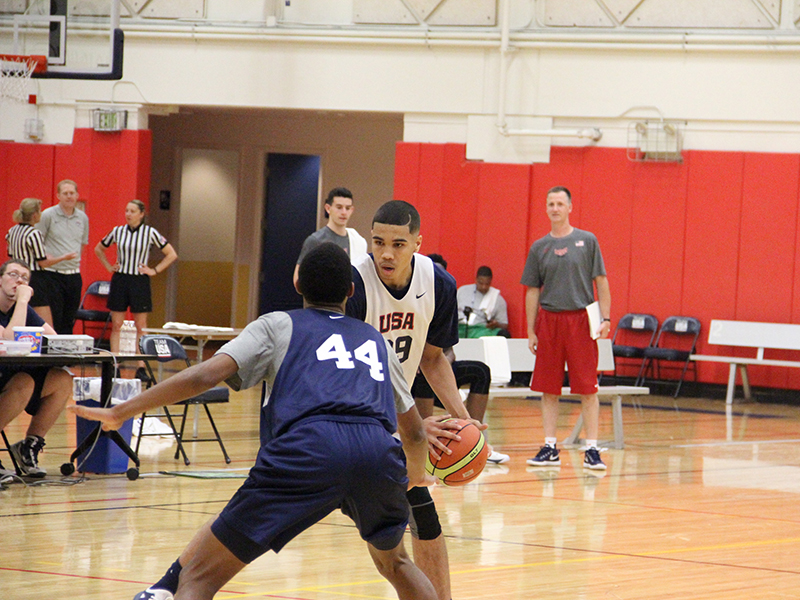 With Duke coach Mike Krzyzewski and three assistants in the house for the Peach Jam semifinals, Jayson Tatum made his future coach a very happy man. The 6-foot-8 wing guard from St. Louis (MO) Chaminade committed to Duke after going for 28 points and 4 rebounds in the St. Louis Eagles thrilling 74-73 victory over Harry Giles and CP3 in the semifinals. Jordan Barnes hit the game-winning 3-pointer at the buzzer for the Eagles after they trailed by double-digits for much of the game. “After my senior year, I will be attending Duke University,” he said on ESPNU. The No. 2 player in the ESPN.com rankings for the Class of 2016, Tatum also considered Kentucky, North Carolina and hometown St. Louis. “They produce NBA players,” Tatum told me of Duke before heading to Greece where he won a gold medal with the US U19 team last Sunday. “[They have a] great coach, [he has the] most wins in NCAA history, and they win national championships and that’s appealing for any team.” Tatum has all the makings of a future pro and could end up being one-and-done at Duke before being eligible for 2017 NBA Draft. While in Greece, Tatum set Twitter afire with this dunk which bloodied the nose of a Greek defender. He was later blocked at the rim by a Croatian defender on a similar dunk attempt in the final. “I play multiple positions,” Tatum said. “I play the 2, 3 and the 4. Sometimes I gotta be aggressive to score and sometimes I gotta crash off the glass and block shots and things like that.” “Jason has a great midrange game,” USA Basketball youth coach Don Showalter told SNY.tv. “He has the ability to get shots off over taller people and is big enough to get shots off over smaller defenders . His defensive mindset has really improved over the past couple years to the point where he can guard many different positions . He has a great demeanor on the court as well.” Tatum and Giles are good friends and were roommates for 27 days with the U19 team in Colorado and Greece, according to ESPN. Duke is heavily recruiting the 6-10 Giles, with Coach K and several assistants consistently watching him at the Peach Jam, and it wouldn’t be a shock to see him follow Tatum there when he announces later this fall. “I gotta do a little recruiting,” Tatum said of adding Giles to the Duke fold. One assistant coach from another school told SNY.tv at the Peach Jam of Giles, “He’s going to Duke.” Photo: USA Basketball