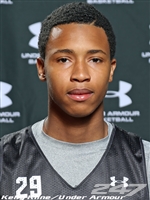 By JACK LeGWIN Special to ZAGSBLOG Jalen Adams has committed to UConn. The No. 39 ranked player in the Class of 2015 by 247 Sports is the second 2015 player to commit to the Huskies, joining 6-4 combo guard Willie Jackson of Athens (Ga.) Christian.  “The relationship I built with the coaching staff made it feel like a family and made me feel like they all had my best interest at heart,” Adams told CBS Sports. “Plus the style of play fits me well.” Louisville and Kansas were the other finalists. “It’s a perfect fit for Jalen,” Mass Rivals coach Vin Pastore told SNY.tv UConn. “The style of play, the freedom that UConn gives their guards, the history of Connecticut guards reaching the NBA, the relationship Jalen built with Kevin Ollie and the fact that Kevin Ollie knows what it takes to be an NBA guard are all excellent reasons Jalen chose UConn.. Adams hails from the same hometown (Roxbury, Mass.) as former UConn star Shabazz Napier, who was drafted by the Charlotte Hornets with the 24th pick in Thursday’s NBA Draft before being traded to the Miami Heat in part because LeBron James is a big fan. Recently, there have been a lot of comparisons between the two players as both are dynamic, attacking guards from the New England area. “I think a lot of New Englanders have taken notice of the Boston kid Shabazz Napier and what he did at UConn so I’m sure Jalen has taken notice too,” Pastore said. “I think there have been a lot of comparisons between Jalen and Shabazz lately. Connecticut has a history of dynamic guards dating back to Kemba Walker and Ben Gordon. They won a title last year because of their guard play. They’ve been recruiting Jalen for a very long time now.” Pastore said Adams has NBA potential. “In terms of Jalen’s upside, he’s a 6-2 guard with a 6-6.5 wingspan,” Pastore said. “He has exceptional length and athleticism. He has tremendous speed, gears beyond gears, just a really fast player. He can score in a multitude of ways and has good touch around the rim. If he can polish his jump shot, make it more consistent and add some range, he would be come what we call ‘unguardable.’ “I think he can reach the NBA, I think he’s that good. He’s got great upside. When he played for us, we were undefeated. He lets the game come to him almost in slow-motion. There were people saying he was the best guard at the Nike Skills camp.” Photo- 247 Sports Follow Jack on Twitter