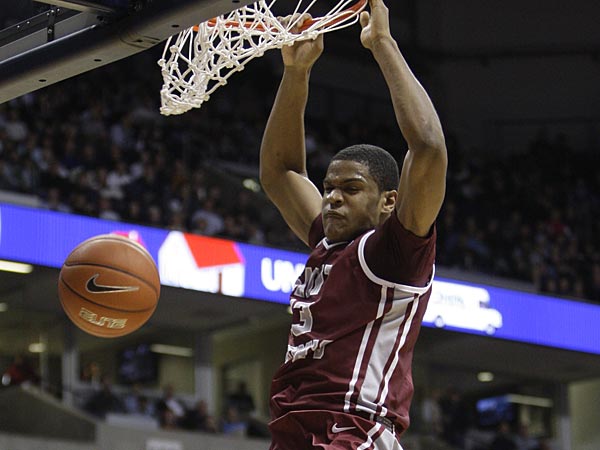 After going through more than a dozen workouts with NBA teams, Ronald Roberts thought there was a decent chance he might hear his named called during Thursday’s NBA Draft. But when the Draft was over, the former St. Peter’s Prep star was still waiting. “The whole time when I was going through the process, I felt like it was a 50/50 chance that I would have my named called,” the 6-foot-8, 220-pound Roberts told SNY.tv by phone. “Obviously, I was disappointed just because I worked so hard ever since I was playing basketball and it was tough not hearing my name called, but it definitely gave me more motivation to show everybody what I got in a five-on-five setting where I showcase what I can do.” A couple hours after the draft, Roberts got two doses of good news from agent Adam Pensack. He would be playing in two NBA summer leagues — in Orlando with the Philadelphia 76ers and in Las Vegas with the Miami Heat. “I want to show these teams my motor, that I never stop playing hard, how I can rebound, get up and down the floor, be athletic,” said Roberts, who averaged 14.4 points and 7.4 rebounds last season for at St. Joe’s team, and went for 15 points and 10 rebounds when St. Joe’s lost to eventual national champion UConn in the second round of the NCAA Tournament, losing 89-81 in OT. “And show my mid-range jumper and my ball-handling, so I’m hoping to show both of those things in the summer leagues.” Former Cincinnati guard Sean Kilpatrick of White Plains and former St. John’s forward JaKarr Sampson are also on the Sixers’ summer league team. St. John’s and St. Joe’s met in the NIT during Roberts’s junior season. “I played against him, he’s good,” he said. “If you look at the roster, they have a lot of athletic guys on the team so I’m looking forward to playing with those guys.” Follow Adam Zagoria on Twitter And like ZAGS on Facebook