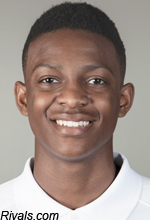 By JACK LeGWIN Special to ZAGSBLOG The state of Texas is loaded with talent, with De’Aaron Fox leading the next generation in the Lone Star State. The smooth lefty out of Cypress Lakes High School is tearing it up at the beginning of his sophomore year, leading the team to the best start in school history at 7-1, most recently scoring 27 points, and adding 14 rebounds in a win over Dallas Richland.  “(The season), it’s been going well,” Fox told SNY.tv. “This is our best start as a program ever and I’ve been playing well.” Standing at 6-foot-3, Fox is a great athlete with a lot of length, and can fill up the stat sheet at will. Ranked 13th in the class of 2016 by ESPN, Fox averaged 22.8 points per game as a freshman, which included a 52 point performance in a 80-78 win over Nimitz. He ran the point for a Houston Hoops team that featured Kelly Oubre, Justise Winslow and Justin Jackson during the summer on the Nike EYBL circuit. Fox insists that he still has much work to do, and a lot he has left to accomplish at the high school level. “After my first year of high school ball and AAU I saw a lot of things I could still get better at.” Fox said. “I am now focusing on them. I want to show people that I have a complete game.” During the summer in a previous interview with SNY TV, Fox said that Baylor was at the top of the list. But at the moment, he insists that everyone is on an even keel. “Now I think everyone’s mostly on even grounds,” Fox said. He currently has offers from Baylor, Kansas State, SMU, Texas and Houston. Follow Jack on Twitter

Chris Walker Could Debut This Month for Florida; Eli Carter to Redshirt (UPDATED)