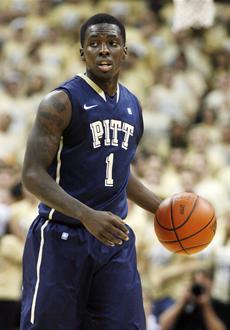 BY MATT SUGAM Special TO ZAGSBLOG NEW YORK – Pittsburgh’s stay in their final Big East Tournament ever did not last long. The No. 4 Panthers earned a double-bye but were knocked out in their first game of the tournament, falling to No. 5 Syracuse, 62-59, in the quarterfinals at Madison Square Garden. “Pittsburgh’s a very, very good basketball team,” Syracuse coach Jim Boeheim said. “They’ve got good leadership, good seniors. They’ve got some good young players.  They’re a very good — they’re a really good tournament team.” One that was hoping to win a fifth Big East Championship before heading to the ACC next season along with Syracuse and Notre Dame. Despite the loss, Pitt outscored Syracuse, 32-22, in the second half to roar back from 13 down at the break and make it a nail-biter. “I think we’re the team you saw in the second half,” Pitt coach Jamie Dixon said. ”But the first half was not our [best] defense.” “I was disappointed, but I guess now we’ve got to focus on NCAA Tournament,” former St. Anthony star Tray Woodall  said after going for 12 points and four steals. “Now we’ve got to focus on this tournament.  We’ll dwell on it for a few hours tonight and then we have to move on.” Where they will go will be determined on Selection Sunday. ESPN bracketoligist Joe Lunardi currently has the Panthers as the No. 5 seed in the West Bracket taking on No. 12 La Salle / Tennessee. And despite being one-and-done in the Big East Tournament, the Panthers won’t use that as a driving factor heading into the NCAAs. “I don’t think we need any more of a chip on our shoulder,” Woodall said. “We want to win regardless. This game in the second half showed what kind of team we really are. We played outstanding basketball in the second half. “I just hope from here we’re building on what we did in the second half, and erase what we did in the first half.” Photo credit: USA Today Follow Matt Sugam on Twitter Like Matt Sugam on Facebook