Bearcats Sliding Into the Big Dance 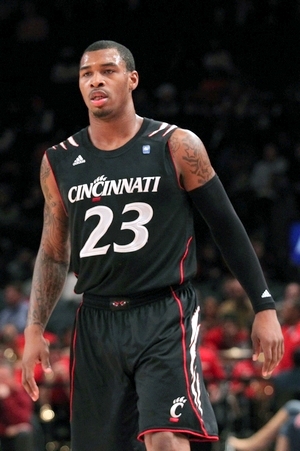 BY MATT SUGAM SPECIAL TO ZAGSBLOG NEW YORK – There’s no doubt in Mick Cronin’s mind that his team will hear their named called on Selection Sunday. “I don’t think that’s any question,” the Cincinnati coach said after his team lost to No. 1 Georgetown, 62-43, in the Big East Tournament quarterfinals at Madison Square Garden. “If it is ‑‑ again, I don’t know how anybody could question that.” The Bearcats are expected to go dancing, but they aren’t exactly coming in strong. After an 18-6 start, Cincinnati has lost seven of their last 11. Sitting at 22-11, 9-9 in the Big East, ESPN Bracketologist Joe Lunardi currently has Cincinnati as the No. 11 seed in the West Region taking on No. 6 Butler. Despite their record over the past five weeks, redshirt junior Sean Kilpatrick of White Plains, N.Y., feels both he and his team can rebound after his 2-of-12, four-point performance. “We’ll be alright,” he told SNY.tv. “I got so much confidence in my team and I know that everybody’s going to bounce back ”
Yes, Cincinnati would have liked to have spent more time in New York City after a run to the Big East Finals last year. However, Cronin won’t object to e a week off, either.
“With getting guys healthy and getting fresh mentally, having gone last year to the championship game here and then having to beat Texas and Florida State and the NCAA made us play at 10 on Sunday night and bus home and get home at 6 in the morning and turn around and fly to Boston on Tuesday and play against a team you can play on Saturday an hour from home, that was a disadvantage,” he said. “So I do think the team getting some rest could be an advantage.” Photo credit: DraftExpress.com Follow Matt Sugam on Twitter Like Matt Sugam on Facebook

Who to Watch at the Atlantic-10 Tournament

Boeheim Would Love to See ACC Tournament Come to MSG