Amar’e, Melo Both Questionable After First Scrimmage Together 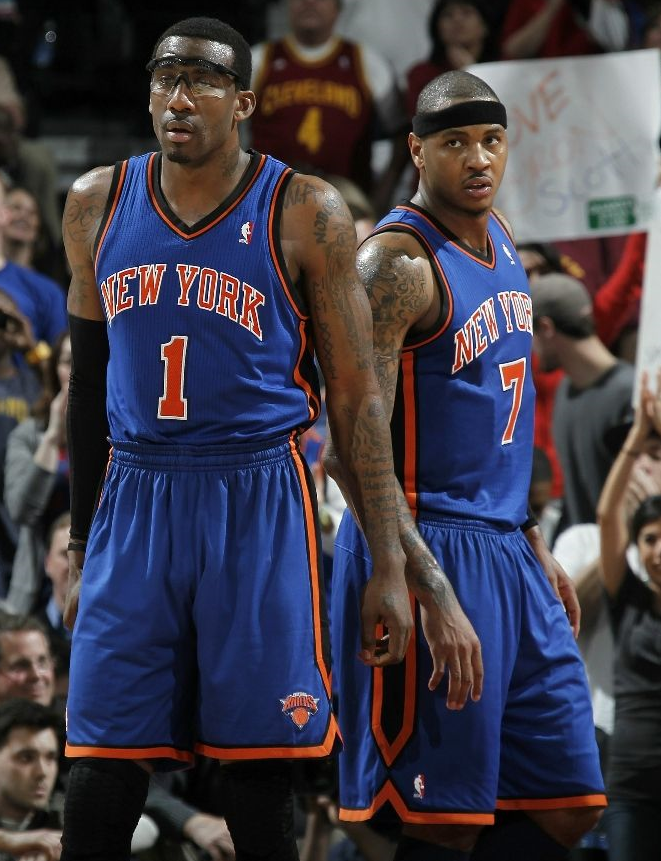 By JOSH NEWMAN Special to ZAGSBLOG GREENBURGH, N.Y. — Amar’e Stoudemire and Carmelo Anthony may have scrimmaged together in practice on Monday afternoon for the first time this season, but the return of one or even both stars remains up in the air. Anthony has missed the last two games with a hyperextended left knee and did not go full in practice on Monday, while Stoudemire, out the entire season to this point after left knee surgery in the preseason, went full on Monday. Both players remain questionable to play on Tuesday against the Portland Trail Blazers at Madison Square Garden. The timetable on Stoudemire was 6-8 weeks after surgery. Monday marked eight weeks, but he said after practice on Sunday that he is less than 80 percent right now due to lingering soreness in the knee. “We’ll have a better feel tomorrow based on practice today,” Knicks head coach Mike Woodson said. “I thought he moved around pretty good today. We’ll assess him tomorrow, he’s still day-to-day as far as I’m concerned. We’ll see how he feels and he’ll let us know. He got through everything today, which was kind of nice.” The problem for Stoudemire right now appears to be a combination of conditioning, which is understandable after such a long layoff, and gaining knowledge of the Knicks’ defensive sets. Stoudemire put in some extra post-practice work with a few members of the second unit in an effort to better learn the defense. While Stoudemire’s prognosis seemingly could go either way, Anthony painted a grimmer picture of whether or not he would play on Tuesday. “I’m still trying to work on getting my lift back,” Anthony said. “Yesterday was the first day I actually did something on the court in terms of shooting. Today, I did most of the practice, but it still don’t feel right as far as my balance, and my lift and the power that I need off that.” The NBA’s second leading scorer at 28.5 points per game, Anthony injured his knee during a Christmas Day loss at the Los Angeles Lakers, then sat out a buzzer-beating win at the Phoenix Suns on Wednesday and a buzzer-beating loss at the Sacramento Kings on Friday. All told, the early MVP candidate has missed six games this season with hand, ankle and now knee injuries. “If I don’t have no lift and my power back in my legs, I don’t think I’m gonna try to do it,” Anthony said of a possible return on Tuesday. “Running up and down, there’s no pain, just weakness in my leg. I don’t feel like I have the full strength that I need right now, so I wanted to go out there today and try and get through a practice, take a little bit of contact to see how it feels.” Whenever Anthony and Stoudemire get back on the court together, all eyes will be on the pair, which has been charged with bringing the Knicks to the promised land. Including the playoffs, they are 31-40 together, but 8-2 under Woodson. “It felt good today, seeing him out there running our offense, getting him back into the flow of things, just playing within the system and everybody feeling  comfortable out there,” Anthony said of Stoudemire. “He’s fitting right in so far in practice. Right now, it’s just about him getting his legs underneath him. When he’s ready to come back, our arms are open to him.” Also on the injury front, Tyson Chandler is officially probable with a sprained right ankle and Rasheed Wallace is listed as questionable with a sore left foot. On Chandler and Jason Kidd (recovery day), Woodson said they were just pampering them a bit based on the minutes they had played recently. “I’m sure they’ll both be ready for tomorrow,” Woodson said. Follow Josh Newman on Twitter

Amar'e, Melo Still Not 100 Percent, But May Play on New Year's

Not Yet 100 Percent But Looking To Help, Amar'e Returns