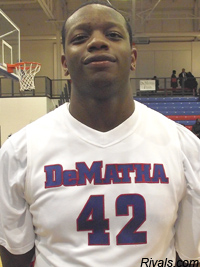 When Tom Crean is not sitting courtside at the NBA Finals and rooting on his former protege Dwyane Wade, he’s been busy sending texts to many of the top recruits in the nation. The Indiana coach tapped out the first texts after midnight on Friday — when the new NCAA rule kicked into effect — to both 2014 wing Theo Pinson and 2013 center Beejay Anya. “Tom Crean texted me at 12 o’clock,” Anya said from the USA U17 trials in Colorado Springs, Colo., where he was named among the 14 finalists for the World Championship team. Indiana already has a couple of ins with Anya, the No. 2 center in the Class of 2013 according to Rivals. His Team Takeover teammate, Stanford Robinson, a 6-4 shooting guard out of Fairfax (Va.) Paul VI, recently committed to Indiana. “I know somebody on the team if I end up going there,” said Anya, out of DeMatha Catholic. “Me and Stan have known each other for a long time, so overall it helps out but I know it gives me a little more comfortability when I come for a visit.” Crean also astutely hired former Towson assistant and Team Takeover coach Kenny Johnson to help recruiting efforts in the fertile DMV area. “Yeah, he was the head coach of my AAU 16 and under [team],” Anya said. “It’s the same thing as with Stan there. I’m comfortable, I know somebody there. I know coach coach Kenny and Stan, we go way back and those two have been a big part of my basketball career so I’m happy for them and hopefully they’ll be successful there.” Still, the 6-foot-7, 275-pound Anya rattled off a list of additional offers from Ohio State, Syracuse, Louisville, Pittsburgh, Georgetown, N.C. State, UCLA, DePaul and others. He said he has no visits planned for the near term and has no plans to cut his list. “I have no idea, I’m just taking it one day at a time,” he said. Instead, he is focused on trying to make the final cut for the U17 team and winning a gold medal in Lithuania “It’s good preparation for the next level and I respect every one of these players right here, everyone here is so good and talented,” he said. He added: “It’s an honor to represent my team, an honor to represent myself and represent my country. And I’m extremely happy that I was able to get an opportunity to do so.”

Jabari Parker Says He Will Decide in November