Christian Jones, a 6-foot-7, 220-pound forward from Bradenton (Fla.) IMG Academies, verbally committed to St. John’s on Saturday over Auburn and Oklahoma State, a source with knowledge of the situation told SNY.tv.

Jones visited St. John’s this past week and was on campus during the NBA Draft when former St. John’s forward Moe Harkless was chosen with the 15th pick by the Philadelphia 76ers.

“Christian Jones is a very good athlete  who has improved his skill set tremendously,” IMG postgrad

Novak, the Knicks’ sharp-shooting small forward, won his “Early Bird Rights” on Friday, along with point guard Jeremy Lin. The Knicks can now re-sign both players by going over the salary cap and still keep their mid-level exception.

“It’s a good thing for Steve,” Mark Bartelstein told SNY.tv of the “Bird Rights” ruling. “It gives us a lot more flexibility and a lot more options. This is always what you want, as many options as you can have regarding free agency. He’s a free agent and we’ll see what happens.”

Former West Virginia forward Kevin Jones has discussed the parameters and is expected to agree to a three-year, partially-guaranteed, multi-million dollar contract with the Cleveland Cavaliers, his agent, Bill Neff, told SNY.tv.

“When you look at our team last year, once we moved Evan [Turner] into the starting lineup we didn’t have another wing,” Collins said, according to the Philadelphia Inquirer.

“We viewed Maurice as that guy who is going to be that bigger wing coming off the bench, and we feel like now we have a guy who can do that.”

Uncommitted junior big man Dakari Johnson tallied 16 points and 12 rebounds and uncommitted senior wing Jabari Parker had 12 points as the U.S. U17 team cruised to a 95-57 victory over the Czech Republic in the FIBA U17 World Championship Saturday in Lithuania.

“Good overall defens[ive] performance from us today, played great as a team 2 down 7 more to go,” Johnson Tweeted. 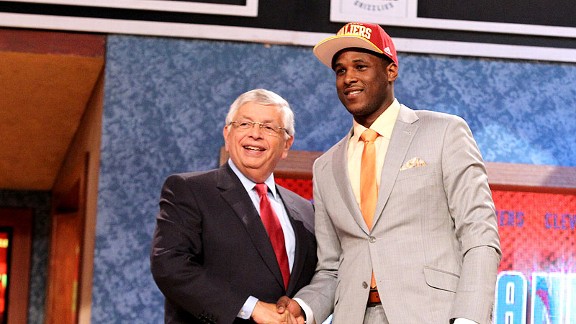 Kyrie Irving and Dion Waiters became friendly through playing AAU ball against one another, Irving for the New Jersey Roadrunners and Waiters for Team Final.

Now they’re teammates on the Cleveland Cavaliers and head coach Byron Scott says they can man the backcourt together for the next decade.

“We just felt it was going to be a great fit with Kyrie,” Scott said Friday on The Doug Gottlieb Show on ESPN Radio. “It puts a very explosive young backcourt together that can be together for 10 years.” The Knicks scored good news Friday evening when the NBA announced that both Jeremy Lin and Steve Novak would retain their “Early Bird Rights,” meaning the Knicks can go over the salary cap to retain them in free agency and still use their midlevel exception.

“Under the settlement, the union agreed to limit the scope of the ruling by arbitrator Kenneth Dam in exchange for the league’s agreement to drop its appeal,” the NBA statement says. “The rule will now be that players who are claimed from waivers will have the same “Early Bird” rights as if they had been traded, but will not have full “Bird” rights unless they are claimed through the league’s amnesty procedure.”

The decision means that the Knicks will have greater flexibility when free agency begins at midnight Sunday and can re-sign both Lin, the point guard who gave birth to the international phenomenon known as “Linsanity,” and Novak, their sharpshooting ace, without regard for the salary cap at a starting salary of about $5 million.