Jabari Parker Says He Will Decide in November 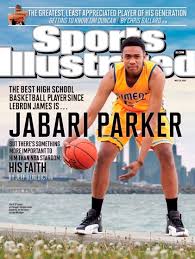 The top two players in the Class of 2012, Nerlens Noel and Shabazz Muhammad, waited until the spring signing period to make their college announcements. But that won’t be the case for the top player in the Class of 2013. Jabari Parker, the consensus No. 1 player in the nation, plans to make his college decision in November and not let the process drag out through his senior season at Chicago Simeon. “It’s a lot of schools on my list right now,” the 6-foot-7 Parker, who was compared to LeBron James in a recent Sports Illustrated cover story, told SNY.tv by phone from the USA U17 trials in Colorado Springs, Colo. “I’m on a setback not making as much progress as I should be [cutting his list] but I’m looking to make my choice in November. “I want to do it for me because I want to get it over with before the season starts.” Parker’s list currently includes 14 schools: BYU, UConn, DePaul, Duke, Illinois, Kansas, Kentucky, Louisville, Michigan State, Missouri, North Carolina, Northwestern, Ohio State and Washington. He told SNY.tv he plans to cut the list to “about eight” sometime “over the summer.”

Parker is considered a likely one-and-done talent and wants to compete for a national championship in what will likely be his only year in college. “We would narrow it down to Duke and Michigan State,” longtime recruiting analysts Roy and Harv Schmidt of Illinois Prep Bulls-Eye told CSNChicago.com, a sister Website of SNY.tv. “Jabari has great relationships with [Michigan State coach] Tom Izzo and [Duke coach] Mike Krzyzewski. That is a very important factor to consider, his relationship with the head coach. And one other thing to consider: Michigan State is closest to home.” Still, Parker himself said Kentucky deserves serious consideration because of coach John Calipari and the school’s pedigree. “They’re always winning,” Parker said. “You also gotta consider them because they’re always expected to win against the top-name programs.” Parker has spoken about Calipari with fellow Chicago natives Derrick Rose of the Chicago Bulls and Anthony Davis, the presumed No. 1 pick in the NBA Draft out of Kentucky. “Derrick more told me about Coach Cal when he was at Memphis,” Parker said. “He just felt comfortable with him. He can trust the guy but it’s different with every player, other individuals, and it will be different for me, too.” The two local schools — DePaul and Illinois — have also been linked to Parker’s recruitment. Parker’s best friend, Cory Dolins, will be a walk-on at DePaul beginning next season, as previously reported by SNY.tv. “That wouldn’t affect my decision,” Parker said. “I have to go with what’s more important for me, what style of play fits me the best.” Dolins told SNY.tv in April: “I haven’t really talked to [Parker] about colleges too much but I know DePaul’s on his list and I’m his best friend, so it might help a little bit. But I’m not going to influence him. I don’t want to push him to make a decision either way, but if he goes to DePaul I’ll be extremely happy. “I hope he goes to DePaul but I’m not going to push it on him.” Illinois is also on his list but Parker says he has yet to establish a strong bond with new coach John Groce. “I don’t have a background with the coach but as time goes, I can just gain a relationship,” Parker said of Groce. For now, Parker is focused on the present and his busy summer. He has appeared on the cover of SI and on ABC’s “Good Morning America” doing an interview with Katie Couric. He is flattered by the LeBron comparisons but doesn’t agree with the analogy. “It was fine at the moment, but just get back in the gym and kept on playing,” he said. “I really don’t like doing things myself and…I let it go early.” As for being on “Good Morning America,” he said that might be good preparation for his NBA career. “It was fun, getting experience behind the camera is always a blessing so I can work on it if I make it to that next level one day,” Parker said. Another issue going forward for Parker, a 17-year-old devout Mormon, is whether he will take the traditional two-year mission once he turns 19. He said he hasn’t decided whether to do it or not. But if he does, it could mean he would miss the first two years of his NBA career. “Life is more important [than basketball] and it will help me for life in general,” he said of a possible mission. “I wouldn’t say it’s a setback but I don’t feel that I’m ready to do that…But who knows?” For right now, Parker is happy to be a part of Team USA and hopes to compete at the 2012 FIBA U17 World Championship in Lithuania June 29-July 8. “[A lot of] people don’t get the opportunity,” he said, “so I would love to have the experience and being a part of the team is on my list of goals that I reach for.” Photo: USA Basketball