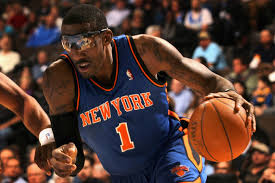 GREENBURGH, N.Y. — The Knicks who faced the Boston Celtics in their last meeting on Feb. 3 are drastically different from the Knicks who will play at TD Garden Sunday on national television. This Knicks team is also deeper and more dangerous than the shorthanded, injury-riddled outfit that was swept last spring by the Celtics in the opening round of the NBA playoffs. “We feel confident about our team and how good we can be,” Amar’e Stoudemire said Friday at practice. “Boston obviously has had our number for the previous six games or so, but we feel good about the opportunity we have going to Boston and feel like we can get a win.” The Knicks (18-18) are 1-5 in their last six games against the Celtics (18-17), but trail Boston by just half a game for second place in the Atlantic Division. When last they met on Feb. 3, Boston beat the Knicks, 91-89. It was the night before Linsanity officially began against the Nets at Madison Square Garden, and although Jeremy Lin played in that game, Iman Shumpert started at point guard and Lin finished with with two points and one assist in less than seven minutes of action. The Knicks bench as a whole — which consisted of Lin, Jared Jeffries, Billy Walker, Toney Douglas and Steve Novak — combined for nine points. Fast forward a month into Linsanity and the Knicks look totally transformed. Lin was a candidate for Eastern Conference Player of the Month honors after leading the team on a 10-3 surge to close February. And the revamped bench — which now includes Baron Davis, J.R. Smith, Shumpert, Jeffries and a red-hot Novak — combined for 50 points in Wednesday’s 120-103 win over the Cleveland Cavaliers. “It’s easier said than done,” Stoudemire said of getting a win in Beantown. “That team’s a phenomenal defensive team. They seem to do a pretty good job on myself and Carmelo [Anthony] by denying us the ball but we have such a great and deep team now to where we have a better chance to win.” Smith was still playing in China the last time the Knicks faced the Celtics. And he wasn’t a part of the playoff sweep that included injuries to Stoudemire (back) and Chauncey Billups (knee), either. Now Smith’s part of a team that goes 10 or 11 deep and is forcing head coach Mike D’Antoni to make some hard choices about who plays and how much. “Everybody wants to play, of course, so he’s in a tough situation because he has a lot of great players,” Smith said. That’s a better problem to have than the one the coach had before. The New Knicks seem to be jelling more and more each day, and were able to get in a mini-training camp this week at their Westchester facility. “We got a lot of great guys on our bench,” Smith said, “so whenever we all end up connecting and start hitting it’s going to be dangerous.” More dangerous than their last few go-rounds with the Celtics, for sure.

How The Big East Tourney Looks

Melo & Amar'e Reflect on the Legend of Lenny Cooke