Kyrie Irving returned to his alma mater Tuesday night and he brought more than his jaw-dropping basketball skills. He brought some valuable lessons for the young St. Patrick players as well as a promise to donate some of his earnings to the struggling Catholic school. “He’s very, very helpful in so many ways,” St. Patrick coach Chris Chavannes told SNY.tv. “And he’s made his promise to also help out the school financially in the very, very near future.” Irving, the No. 1 pick of the Cleveland Cavaliers in the 2011 NBA Draft, has not yet received his first NBA paycheck because of the lockout but he is currently shooting a Nike commercial, which would allow him to donate to his alma mater.

Irving attended a dinner and fundraiser that coincided with the HBO broadcast of “Prayer For a Perfect Season,” which documents St. Patrick’s 2010-11 season that culminated in a loss to arch-rival St. Anthony in the mythical national championship game. Chavannes said some 220 people attended the dinner at The Westwood in Garwood, N.J., and that it raised more than $8,000 for the school. “I think it shows that there’s many ways to give back and just [Irving’s] presence alone drew a lot of people there, to the point where some people didn’t have seats to enjoy the festivities,” Chavannes said. Among other things, “Prayer” highlights the financial struggles of Catholic schools like St. Patrick, with an enrollment of 215 students. “I’m painfully aware of what’s happened to Catholic education,” Naismith Hall of Fame St. Anthony coach Bob Hurley said during the film. “I think my least concern right now as a coach here is my preparation for games. I think my biggest concern is my preparation for fund-raising. “In the Catholic church, we are settling lawsuits throughout the diocese, all over the United States, with the religious and the sexual abuse cases, which has really taken away any reserve of money that would’ve normally been used to keep schools open.” Irving, who left Duke after his freshman season, also served as a valuable role model for the current St. Patrick players because he is back taking four courses at Duke during the lockout. 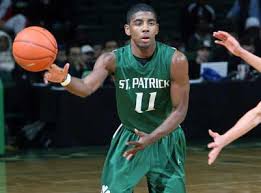 “I love Duke,” Irving told CBS News during a recent interview. “I’m back here because I love it. You know, because Duke is the place.” The CBS piece pointed out that Irving is one of 52 current NBA players currently taking college courses. Others include former St. Benedict’s Prep standout Tristan Thompson (Texas), Steph Curry (Davidson) and Kevin Love and Russell Westbrook (UCLA). Irving, who along with Dexter Strickland (North Carolina) and Michael Kidd-Gilchrist (Kentucky), helped St. Pat’s win the 2009 New Jersey Tournament of Champions title, made a promise to his father upon leaving Duke early that he would get his degree within five years. “And he stuck to the pact and I commend him for being so young and having the fortitude to actually stick to the game plan,” Drederick Irving told CBS. Chavannes, who took over for departed coach Kevin Boyle, now at Montverde (Fla.) Academy, says Irving’s decision to return to his alma mater can only have a positive impact on the current players. “It showed the guys that there’s many ways [to help],” Chavannes said. “He comes back to open gyms and….gives them advice and shows them those Duke ways of doing certain things, whether it be from a basketball standpoint or from a leadership standpoint.” RELATED CONTENT **No. 1 pick Irving returns to run at St. Pat’s **Elizabeth is now in South Jersey **St. Pat’s to be featured in HBO documentary  **Chevannes ‘humbled’ to succeed Boyle at St. Pat’s **Boyle leaves St. Patrick for Montverde

West Virginia to Join Big 12...But When?