[youtube=http://www.youtube.com/watch?v=gpsnVK-HO10&w=470&h=315] Hours before Michael Kidd-Gilchrist was to sign his National Letter of Intent to Kentucky last November, his uncle, Darrin, collapsed of a heart attack at 42. “My sister-in-law called and said that DeAnte, his son, found him passed out,” Cindy Richardson, Michael’s mother, says in the film “Prayer For A Perfect Season,” which airs Oct. 25 at 9 p.m. on HBO. “So we all ran around there to try to resuscitate him, and the ambulance came. They couldn’t revive him. We did CPR as best we could and we couldn’t revive him.” Faced with this tragedy on a day that was supposed to be filled with joy, the family persevered and carried on with heavy hearts for the celebration honoring the Kentucky signing.

“My son’s been playing organized basketball all year, every year since he was 5,” Cindy says in the film. “And today is the day he’ll be signing his National Letter of Intent. But the day is still special. It’s still special.” Directed by Marc Levin and produced by Blowback Production, “Prayer” comes out two years after another terrific documentary, “The Street Stops Here,” documented St. Anthony’s run to an undefeated season and mythical national title in 2008. “Prayer” documents St. Patrick’s struggle to remain afloat as small Catholic schools all around it are closing (1,000 nationally in the last 10 years); its “Bermuda Triangle” relationship with North Jersey powers St. Anthony and St. Benedict’s; and the Celtics’ quest for their first mythical national championship under coach Kevin Boyle, winner of 10 state titles and five Tournament of Champions crowns.

It delves into the complex, sometimes heated relationship between Boyle and Naismith Hall of Famer Bob Hurley, and features interviews with both men, as well as Wagner coach Dan Hurley. “I found myself trying to explain the other guy to the other guy quite a bit to maybe help them become friendly rivals,” Dan Hurley said. “I don’t know if we ever got there.” As the season unfolded, the two teams located 13 miles apart carved out undefeated seasons and ended up ranked 1-2 in every national poll. Still, the dominant storylines focus on seniors Gilchrist and Derrick Gordon, now freshmen at Kentucky and Western Kentucky, respectively. The early scenes show Gilchrist enjoying barbeques and quiet moments with his family, including Cindy and her husband, Vince Richardson. Video of Michael as a child shows him playing basketball with Darrin. “He was the miracle baby of our family and God had something special destined for him,” Darrin is shown saying of Michael. (This past summer, Michael officially changed his name to Michael Kidd-Gilchrist to honor his late uncle.) Cindy talks about the family’s decision to send Michael from their home in Somerdale, N.J.., to St. Patrick, some 70 miles away. He awoke at 5 a.m. every day to get to school by 8. “St Pat’s is an old-fashioned Catholic school,” she says in the film. “The only thing they don’t do is beat your kids.” Gilchrist’s father, Michael Sr., was shot dead on the streets of Camden when he was 2 1/2, and the film shows Cindy taking Michael on a tour of Camden to show him where his father used to walk her home from school. The film also delves into how Gordon copes with having his twin brother, Darryl, locked up in the Albert C. Wagner Youth Correctional Facility in Chesterfield, N.J. “I think about him every single day,” Derrick says at one point. 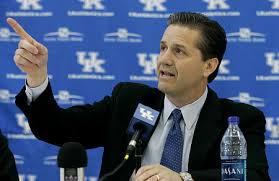 Ultimately, St. Anthony, led by Kyle Anderson and Myles Mack beats Gilchrist, Gordon and St. Anthony, 62-45, in the unofficial national championship game at Rutgers before a capacity crowd that included Kentucky coach John Calipari. The St. Pat’s players are shown crying and distraught in the Rutgers locker room. “Prayer” takes you behind the scenes as Boyle tells St. Pat’s principal Joe Picaro that he will be leaving the school to take a job at Montverde (Fla.) Academy (where he signed on for a salary of $130,000 plus tuition for his son, Brendan.) He is then shown breaking the news to his seniors. It ends on a positive note, showing Gilchrist winning the co-MVP at the McDonald’s All-American Game and depicting all the St. Pat’s players graduating and moving on with their lives. Now Gilchrist is a freshman at Kentucky preparing for Big Blue Madness Friday night and the upcoming season. “He is happy,” Cindy said by phone. “He has a 4.0 GPA. He’s really happy.” RELATED CONTENT **Cal has fastest team since ’08 **Calipari says Kentucky could’ve been UCLA **No. 1 pick Irving returns to St. Pat’s for run **St. Pat’s to be featured in HBO documentary **St. Anthony, St. Benedict’s to face off…finally