***UPDATE: “The Street Stops Here” will appear nationally on PBS Wednesday, March 31 at 10 p.m.*** One of the bonuses of being a professional journalist is that you sometimes get advance copies of movies or books for review purposes. On Wednesday I received a Fedex delivery containing the film, “The Street Stops Here,” which documents Bob Hurley’s 2007-08 St. Anthony Friars, who went a perfect 32-0 en route to the New Jersey Tournament of Champions title and won a national-record 25th state championship. I watched it Thursday in the privacy of my living room and I cannot tell you how much I enjoyed this film, and not just because I appear on camera (for about a split second) during a locker room scene in which Coach Hurley is yelling at his players. This film is the perfect video complement to Adrian Wojnarowski’s wonderful book, “The Miracle of St. Anthony.” If you are any kind of basketball fan, or any fan of human drama in general, run, don’t walk, to see this movie. Directed by Kevin Shaw and produced by TeamWorks Media, it is playing as part of the New Jersey Film Festival on Sunday, Nov. 1 and Friday Nov. 6 — both at 7 p.m. at Rutgers University Scott Hall #123, 43 College Ave., New Brunswick, N.J. Word is Coach Bob Hurley and his wife, Chris, and St. Benedict’s Coach Dan Hurley will be on hand Sunday night. (Knowing what a big Yankees fan Bob is, he’ll probably head straight to a radio or TV to catch up on Game 4 after the film is over.) From a purely basketball standpoint, this film involves a virtual Who’s Who of contemporary basketball personalities. 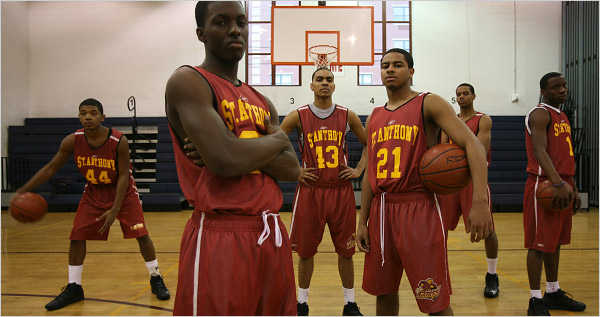 **Consider that the undefeated 07-08 team featured seven current Division 1 players: Mike Rosario (Rutgers), Travon Woodall (Pittsburgh), Dominic Cheek (Villanova), Tyshawn Taylor (Kansas), Jio Fontan and Alberto Estwick (Fordham) and A.J. Rogers (St. Joseph’s). **There are interviews with North Carolina Coach Roy Williams and Duke Coach Mike Krzyzewski. **Former St. Anthony players such as Jerry Walker (who starred at Seton Hall) and Rashon Burno (who serves as an executive producer) also appear in the film. **The storylines of both Bobby and Dan Hurley figure prominently in the film. Bobby is seen raising thoroughbred horses in Florida, while Dan laughs at the fact that he’s now coaching just 10 miles from his father at St. Benedict’s Prep. “We’re not going to play St. Benedict’s because my wife won’t let us do it,” Bob cracks at one point. **There is video footage of both Kobe Bryant and Lance Stephenson playing against St. Anthony in high school (Bryant in a real game, Lance in a scrimmage.) Bob Hurley also tells a group of Jersey City youngsters that LeBron James, in Jersey to face the Nets, has sent them 200 basketballs. **One of my favorite scenes involves St. Anthony blowing out Neptune in Jersey City and the Neptune coach giving Hurley some kind of smirk after an incident involving Rosario. “Take a look at the score, pal,” Hurley bellows at the opposing coach. But this film is about more than just basketball. Much more. It is about how one man, through sheer stubborness, persistence and hard work, has literally altered the lives of dozens of young men at a small, under-funded Catholic school in Jersey City. “You’re supposed to be attempting to gain an education right now, not to turn you into the next guy that plays in the NBA,” Hurley bellows at his all-star team at one point. He later tells the camera: “One out of every 32,000 high school athletes becomes a professional athlete so if you think you’re 6-foot tall son is going to become a pro, you’re not operating with a full deck.” The film gets up-close and personal with Woodall, Rosario, Cheek and Fontan. Woodall, now a sophomore at Pitt, talks about his mom’s drug use and the fact that she has HIV. He eventually moves in with Fontan and his father, Jorge Fontan, in Paterson and calls Jorge his “father.” Having spent many days with these guys during high school, I can attest to what a difference Jorge made in their lives. Rosario is the third “brother” in that family, having moved out of the Jersey City projects seeking a better life. “I see myself in the NBA, playing for the Lakers or the Suns, with a wife, two kids and a big house,” Rosario says. “I see everything.” And he has one man, one legendary coach, to thank for that. (Photo courtesy NY Times) Follow Adam Zagoria on Twitter