Andre Drummond Won’t Be in College This Fall 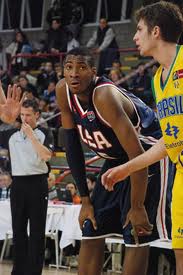 NORTH AUGUSTA, S.C. — Andre Drummond won’t be on UConn’s campus this fall. Or any college campus for that matter. “No way that happens,” Drummond told Mike Anthony of the Hartford Courant on Wednesday. Instead, the 6-foot-11 Drummond will likely be back at St. Thomas More (Conn.) for a postgraduate year, as was reported here last month. “Developing, maturing, on and off the court, would help me,” Drummond, who turns 18 next month, told Anthony. After spending next season at St. Thomas More, Drummond could either enroll in college in 2012 — with UConn and Kentucky the favorites, according to a source — or head into the NBA Draft. Because he would be a year removed from his high school graduating class, he would fulfill the requirements of the current NBA collective bargaining agreement. Of course, that CBA is up in the air given the current NBA lockout and the rules could be dramatically different after a new agreement is reached. “I would actually say that he may just be going straight to the draft if he can,” a source close to the UConn basketball program said last month. “If you’re not going to college next year and you’re going back to high school, I would assume it’s because you’re still trying to get to that 2012 draft.” Still, St. Thomas More coach Jere Quinn insists Drummond’s mother “wants him in college.” While the UConn staff and many of its fans hope Drummond, the No. 1 center in the Class of 2012, will land in Storrs, head coach Jim Calhoun and his staff are here at the Peach Jam also recruiting several other 2012 big men, including Alex Poythress of the Georgia Stars and Anthony Bennett of CIA Bounce.