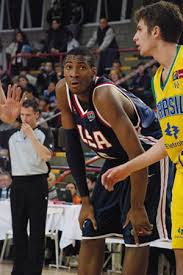 Andre Drummond will turn 19 years old in 2012 and will be a year removed from his original high school graduating Class of 2011. Thus, under current NBA rules, he would appear to be eligible for the 2012 NBA Draft. “I would actually say that he may just be going straight to the draft if he can,” said a source close to the UConn basketball program, which is recruiting the 6-foot-10 Drummond. “If you’re not going to college next year and you’re going back to high school, I would assume it’s because you’re still trying to get to that 2012 draft.” Jere Quinn, Drummond’s coach at St. Thomas More, said he doesn’t believe Drummond, who was born in 1993 and is the No. 1 prospect in the Class of 2012, will go to the 2012 draft and will instead go to college. “His mom wants him in college,” Quinn said Tuesday by phone. Speaking recently at the NBA Top 100 Camp in Virginia, Drummond told USA Today he has offers from UConn, Duke, Georgetown, Louisville, North Carolina and Pittsburgh. “I just shut the whole process down and not talk with anybody,” Drummond told the paper, referring to his reluctance to give interviews. “I tell them when I’m ready to talk with somebody, I’ll let you know.” UConn has been recruiting the Connecticut native from the get-go, and the source said he believes UConn and Kentucky may be the leaders at this point. “What I’ve heard is that he narrowed it to [UConn] and Kentucky,” the source said. “I think if the kid was going to college next year [in 2011] I think it would be UConn.” Instead, UConn picked up a late commitment from 2011 wing DeAndre Daniels of IMG Academies. “If they thought Andre Drummond was coming [this year] you wouldn’t have seen that with DeAndre Daniels,” the source said. “If Andre wants to comes to college they will find a way.” Still, Quinn has said all along that Drummond won’t be on a college campus in 2011 and will do his postgraduate year at St. Thomas More in 2011-12. “His mom likes his academic maturation, his social maturation,” Quinn said. “We just want him to enjoy his high school career.” But once that high school career ends, will Drummond head straight for the Draft? DraftExpress.com currently does not have Drummond among its projected 2012 picks, with Kentucky’s Anthony Davis, North Carolina’s Harrison Barnes, Ohio State’s Jared Sullinger and Baylor’s Perry Jones currently projected as the top four picks. Yet Drummond’s potential entrance could change that dynamic. Keith Glass, an NBA agent, said that everything is up in the air because of the looming NBA lockout. The current one-and-done rule may change under a new CBA. “They’re going to change that rule one way or the other,” Glass said by phone. “If the rules stayed the same it sounds to me like he [Drummond] would be eligible. Your class has to be a year out. “If I was a lawyer I’d challenge that if they tried to hold him out.”

The Best Name in Hoops? The Iceman Cometh