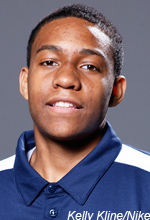 NORTH AUGUSTA, S.C. — As the No. 1 small forward and one of the Top 5 players in the Class of 2013, Jabari Parker is used to the hype. But in a recent conversation with Duke Coach Mike Krzyzewski, he was given some mighty praise by a man who knows a thing or two about hoops. “He compared me to Kobe Bryant and he compared me to Grant Hill,” the 6-foot-7, 220-pound Parker said Wednesday at the Peach Jam. “I’m really good on my footwork. I can play on the post sometimes and I can also be on the perimeter,” said Parker, who attends Chicago Simeon High. Most kids hear flattering words from their suitors, but rest assured not many are compared to Bryant and Hill. “It makes me feel good, you know, just because [Bryant] is one of the greatest players ever to play basketball,” Parker said. “Being there right now, it gives me something to work towards.” Through four games here as of Wednesday night, Parker is averaging 19.3 points and 9.3 rebounds for the Mac Irvin Fire. He put up 26 points and 12 rebounds in an 83-59 loss Wednesday to BABC, and then followed that with 25 and 12 in an 82-78 victory over All Iowa Attack. “He’s got a pro body for his position,” said ESPN National Recruiting Director Paul Biancardi. “He has an advanced set of skills with the ability to make shots and create for himself at a moment’s notice, as well as a good all-around game with passing, rebounding and handling.” “He’s got a high ceiling. To continue to get better and be more efficient and even more productive, the bullseye’s going to keep getting bigger.” Parker is being courted by a Who’s Who of big-time schools but mentioned Duke, UConn, Illinois and DePaul among schools hot on his trail lately. He took an unofficial to Duke in January. “They’re always a winning team,” he said of Duke. “Coach Krzyzewski always has a good relationship with his players and I feel like to go in there you got to have a good relationship with the coach.” He has also taken unofficials to both Illinois and DePaul. “It was real good,” he said. “Just showing that those schools are interested in me from the city, it also tells that they’re like family to me.” He also mentioned that his most recent calls from Coach K and UConn coach Jim Calhoun. “[Coach Calhoun] called me right before the King City Classic,” Parker said. “He said that he offered me a scholarship and he’s really recruiting me hard.” Still, Parker said he has no favorite right now and wants to decide “probably in my senior year.” “I’m going to wait it out, take my time,” he said. “Work on the present right now and don’t get caught up with anything.” Added Biancardi: “Everybody wants him because of his talent and he’s the type of good kid that you want to coach and is going to make your locker room, team and university better.”

Andre Drummond Won't Be in College This Fall