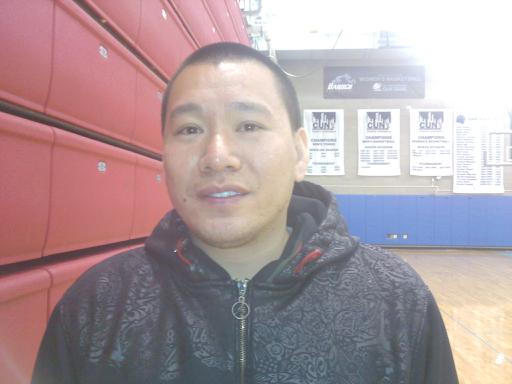 NEW YORK — Lost in all the news coverage of Louisville junior power forward Terrence Jennings hiring an agent and remaining in the NBA Draft is is the identity of that agent. Jennings’ agent is none other than Eddie Lau, the infamous New York-based basketball personality who was a mentor to former New Jersey prep star Derrick Caracter and an alleged runner for NBA agent Dan Fegan. “I’ve been working with Eddie for a while now,” the 6-foot-10, 235-pound Jennings, a Sacramento, Calif., native, said in an exclusive interview Wednesday morning after a workout at Baruch College. “He’s helped me through this whole process.” Lau, 36, became a certified NBA agent after Christmas and said he counts Justin Brownlee of St. John’s and Vernon Teel of Loyola Marymount among his clients. He also works with former NBA guard Rafer “Skip to My Lou” Alston. The National Basketball Players’ Association confirmed that Lau is a certified agent. BECOMING AN NBA AGENT Louisville coach Rick Pitino has known Lau since Lau and current Manhattan coach Steve Masiello were Knick ball boys during Pitino’s tenure in New York in the late 1980s. Pitino said he didn’t advise Jennings one way or another on whom to hire as an agent. “I didn’t even know Eddie was an agent until just recently,” Pitino said Wednesday by phone. “I guess he got certified…I have nothing against Eddie. I think he cares about T.J. “Now is he going to make a difference of whether T.J. gets drafted or not? Absolutely not. And by the way, no agent’s going to make a difference. He’s got to just be diligent making sure T.J. gets in front of as many teams as possible. And if he does that he’s doing a good job. But I just hope he gets T.J. a good deal over in Europe because I think this lockout’s going to be an ugly one.” A native of the Lower East Side of Manhattan, Lau said his main goal is to help players such as Jennings get accurate information about their draft status and help them transition to the NBA “Everybody wants to make money, but I think at the end of the day I don’t think everybody tells these kids the truth,” Lau said during an extensive interview at Baruch. ON FEGAN, CARACTER AND HELPING KIDS A Google search of Eddie Lau does not portray him in the most positive light.

Gregg Doyle of CBSSportsline.com wrote a 2005 article which portrayed Lau as a runner for Fegan who was involved with Caracter. “Don’t write about me,” Lau reportedly told Doyel then. “Don’t do it, or we’ll have problems.” Looking back, Lau said he simply wanted the story to be about Caracter, not about him. “I realize the media has to write what they have to write,” Lau said. “Probably the way I handled it wasn’t right, but at the end of the day people know who I am. I’m not the person who’s trying to hurt any of these kids or hurt anybody. I just want to make sure I always tell them the truth about this whole basketball thing.” Lau says he worked for Fegan, but insisted he never took money in exchange for directing a player toward a certain agent. “Not even close, not even close to it,” he said. “I’ve known the [Caracter] family a lot also. They helped me with a lot of stuff that I was going through myself. I was still young and the whole thing. People don’t realize, I was dating his aunt [Alean Terry] for a long time. “But at the end of the day, though, it had nothing to do with Dan Fegan. It had nothing to do with my agent stuff.” He said Caracter simply needed guidance during a troubled childhood that took him to several high schools, including Elizabeth (N.J.) St. Patrick and Fitchburg (Mass.) Notre Dame Prep. (Jennings also attended Notre Dame Prep and said that is how he made the connection with Lau.) “The biggest thing is Derrick needs to be stable, and also needed a male role model besides his uncle,” Lau said. “His mom, his grandmother, his aunt, everybody did a great job. But I think people kind of looked at Derrick like he had accomplished so [many] basketball goals at such an early age, that they really looked at him like this kid is not allowed to make any mistakes. But he was still a kid. At 15 years old, 14 years old, he was ranked No. 1 in the country.” Asked if he remains in touch with Caracter, Lau said, “We see other here and there, not a lot. I’m just happy that he’s on the [Lakers] team, playing with Lamar Odom, who I’m a good friend of, and Andrew Bynum.” Lau said he also remains in touch with Fegan, the agent. “I still know Dan really [well],” Lau said of the agent who handles Dwight Howard, John Wall and Jason Richardson among others. “We’re still friends. But I’m basically doing stuff on my own right now, just trying to really help the kids out.” WORKING WITH DRAFT-ELIGIBLE PLAYERS Lau said he’s been around basketball “since I was 10 years old.” He counts former St. John’s and NBA player Jayson Williams as his Godfather. He began his high school playing career at Archbishop Molloy under legendary coach Jack Curran before finishing up at a North Carolina prep school called First Assembly Christian School. He said he played one year of college ball at Quinnipiac and also was a graduate assistant at McNeese State under current Duquesne coach Ron Everhart. Along with current Masiello and the late Troy “Escalade” Jackson, he served as a Knicks ball boy under Pitino. He said he loves the game and has always remained involved. “I helped a lot of kids go on to get scholarships, and that’s my original goal,” Lau said. Now he’s working with Jennings and Brownlee, among others. Both players attended a recent NBA draft workout in Houston hosted by John Lucas and Lau said Jennings will attend the workout this weekend at the Nets facility in East Rutherford, N.J..

“Everybody’s intrigued [by Jennings] because he’s 6-10, long, athletic,” Lau said. “Great kid. And after the Nets workout we’ll find out what other teams are going to be more interested.” Jennings said he felt it was time to come out after averaging 9.6 points and 5.2 rebounds in 23 minutes a game last season. With players like Jared Sullinger, Harrison Barnes, John Henson and Tyler Zeller electing to stay in college, some have portrayed this year’s draft as weak, but Jennings said that didn’t enter into his decision-making. “I really didn’t think too much about it,” Jennings said. “I’m just focused on working out, getting better and going to these workouts and showcasing my talents. Show these guys that I can play, I can rebound, I can block shots and find a spot on the team.” Pitino said he consulted with the 21 members of the NBA Undergraduate Advisory Committee and that most of them said Jennings would go in the middle or late second round. Pitino said he advised Jennings to take the first European deal he is offered “I gave him all the information and said to him, ‘You’re probably, if you have good workouts, going to get drafted in the second round,'” Pitino said. “That being said, you must understand that the first deal that comes across from Europe, you need to take because a lot of these pro guys are very good and they’re going to need money and they’re going to have to go to Europe because of the lockout.” Jennings has been working out at Baruch with Jason Curry, the President of Big Apple Basketball. Curry has known Lau since both attended college and said Lau seems to have Jennings’ best interests at heart. “I can unequivocally say that,” Curry said. “Just based upon some of the questions that I’ve asked him, in terms of where Terrence is…and a lot of things that I’ve seen over the past week, Eddie’s articulated a lot of those same thoughts and I can tell that that’s definitely in the best interest of Terrence.” RELATED CONTENT **Pitino: NBA players will flood Europe during lockout **Gibbs, underclassmen must make quick decisions on NBA