Marvell Waithe and Rutgers flirted with each other over the period of several years, but in the end the 6-foot-8, 200-pound Canadian forward will play in the SEC.

Waithe on Thursday committed to Arkansas over Rutgers after visiting both schools.

“Marvell sat down and evaluated everything and he just felt like he was a better fit for Arkansas than for Rutgers. He really struggled with the decision. That’s why coming back from his visit [to Rutgers] on Sunday he took about three days to really think about it.” 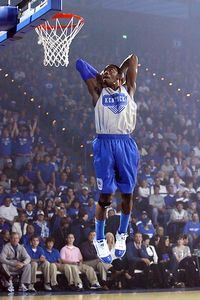 Kentucky freshman point guard John Wall is facing eligibility concerns because of his relationship with his former AAU coach, Brian Clifton, according to a report.

Clifton, who coached Wall with the D-One Sports program and was with him in the summer of 2008 at the Steve Nash Skills Academy in New Jersey, was a former certified agent.

“Those are amateur issues that arose prior to their coming to our schools,” SEC Commissioner Mike Slive told Dana O’Neil and Pat Forde of ESPN.com in reference to Wall and Mississippi State freshman big man Renardo Sidney. “Those are strictly amateurism issues. As we told our people, somebody needs to determine if they are eligible. It’s not relative to you, it’s relative to them.”

Around the Horn with Big East Coaches

“It’s an honor and I want our guys to enjoy that today. We have such great respect for everybody in this league and for them to pick us No. 1, we’re excited about that.”

–Wright on being picked No. 1

“With our seniors, [Tory] Jackson and [Luke] Harangody, their whole motivation is to get

Kyrie Irving made it official on ESPNU Thursday night, putting on a blue Duke baseball hat and announcing his intention to play for the Blue Devils.

A senior at Elizabeth (N.J.) St. Patrick, Irving chose Duke over Texas A&M and Kentucky, both of which he took official visits to. He canceled visits to Georgia Tech and Seton Hall after deciding to announce.

“I”m pleased to announce that I will be committing to Duke University,” he said. “I will be a Blue Devil next year.”

Irving said his “relationship with [Coach Mike Krzyzewski] and the whole entire coaching staff” was key to his decision. 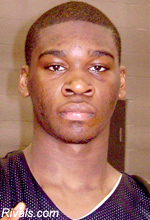 Villanova continues to dip into the rich recruiting waters of the New York metropolitan area for talented guards.

Achraf Yacoubou, a 6-foot-4, 205-pound junior shooting guard from Long Island Lutheran, committed to the Wildcats on Wednesday, the same day Villanova was anointed as the preseason No. 1 team in the Big East Conference for the 2009-10 season.

“I committed to Villanova,” Yacoubou, ranked No. 19 at his position nationally, wrote in a text. “I like the business school, the environment, the team and the coach.”

Yacoubou was also being pursued by Kentucky and UConn, and had visited Kentucky for Big Blue Madness last weekend.