Elizabeth (N.J.) St. Patrick point guard Kyrie Irving has committed to Duke and will announce sometime this week, according to multiple sources with knowledge of the situation.

“He has committed. I heard that from [a Duke assistant],” said a second coach who recruited Irving.

A third source close to yet another assistant coach recruiting Irving confirmed that he had committed to the Blue Devils.

“He told me it’s a done deal,” the source said.

Hit the Video Player at right for my interview with Kimani Young, the former St. John’s assistant and current AD at New Heights Youth.

Kimani has been on both sides of the college recruiting game and knows it as well as anybody. He’s in a unique position to be able to advise young men on their futures because he’s worked at the college level and the AAU level.

In this interview, Kimani breaks down the recruitments of his Big 3 seniors: JayVaughn Pinkston, Devon Collier and Ashton Pankey.

Of the 6-foot-6 Pinkston out of Bishop Loughlin, he says: “I think that Villanova is probably the perfect scenario for a kid like JayVaughn and many other kids in New York City, a place where winning has been there. A great academic institution. The coaching…But his options are still open.”

Pinkston will visit St. John’s for Red Storm Tip-Off on Thursday, and then he will go to Villanova’s “hoops-mania” on Friday.  Then he will probably go to Seton Hall the following weekend. He is also considering Tennessee and Marquette.

Kimani says Pinkston may wait until the late signing period.

Anthony Mason Jr’s return to the basketball court has been delayed yet again.

The redshirt senior will miss 4-6 weeks while recovering from a hamstring injury re-aggravated during team practice over the weekend.

“We’re disappointed for Anthony, because we know he wants to be out there. We have to give him time to recover so when he joins us on the court, he’ll be 100 percent,” St. John’s head coach Norm Roberts said. “We’ll obviously be very happy and excited to get Anthony back. He is such a versatile scorer, and his ability to be our main scorer on any given night makes our team that much deeper.”

Brian Kelly is well versed in the 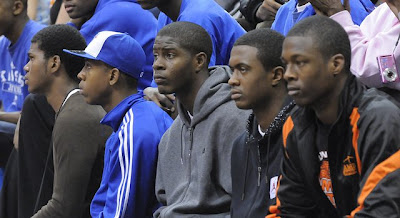 Doron Lamb, Josh Selby and Harrison Barnes enjoyed their weekend official visits to Kansas but are all still involved in the recruiting process.

“The highlight [of the visit] was when I walked out with the others [recruits]and the crowd was cheering and gave us a standing ovation. I’ve never had anything like that happen to me,” Lamb told Gary Bedore of the Lawrence Journal-World & News.

“It was a cool visit. I liked meeting the players, coaches and seeing the campus. Coach [Bill] Self is cool. He’s real. He tells you the truth.”

Calvin said he had never seen anything like “Late Night” before.

Charles said Moore, ranked No. 23 among small forwards in the Class of 2010, is tentatively slated to take an official to St. John’s the weekend of Oct. 30 and to Pitt the weekend of Nov. 6.