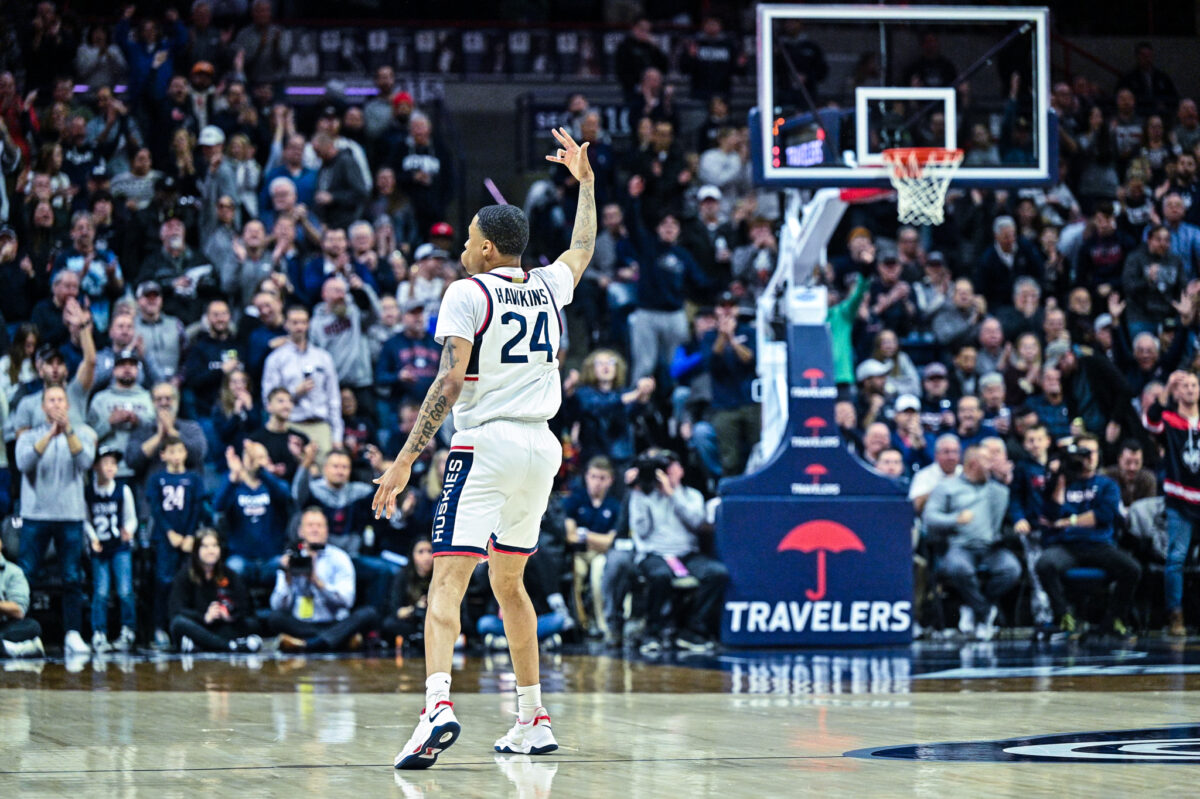 By ADAM ZAGORIA Dan Hurley is now coaching the best team he’s ever had at the college level. The No. 8 UConn Huskies are unbeaten at 9-0 after Thursday’s 74-64 victory over Oklahoma State in the Big East/Big 12 Battle. They are ranked No. 4 on KenPom.com. And they feature a number of pro prospects who drew more than a dozen NBA scouts to Thursday’s game. We checked in with a couple of those scouts to get feedback on UConn’s top NBA prospects: Jordan Hawkins, Andre Jackson and Donovan Clingan. Jordan Hawkins The 6-foot-5 sophomore is averaging 13.3 points and 2.3 rebounds after putting up a career-best 26 points while making 5-of-9 from deep against the Cowboys. Hawkins is projected as the No. 37 pick in the 2023 Draft in the latest ESPN.com mock.

NBA scout No. 1: “Hawkins can shoot and is a good vertical athlete. He has to understand the game better, more often than not he’s just out there playing.” NBA scout No. 2: “That was best game I’ve ever seen Hawkins play. Definitely playing like a player who should get some late-first-round considerations . A terrific shooter, great form. A deceptive athlete. High confidence level.” Andre Jackson The 6-6 junior has only played in six games since returning from a pinky injury and is averaging 5.0 points, 5.8 rebounds and 4.3 assists. He’s projected as the No. 43 pick in latest ESPN mock.

NBA scout No. 1: “Jackson is a very good athlete who plays hard but [I’m] unsure about his offensive skill set. Hard to tell if he’ll make enough shots at the next level to warrant keeping him out there.” NBA scout No. 2 : “I feel like every draft is littered with guys like Hawkins or Jackson who will spend a ton of time in the G League and never get good enough to contribute at a high enough level. But they are young still. Can’t write them off yet.” Donovan Clingan The 7-2 freshman is averaging 8.7 points and 6.4 boards and was named MVP of the Phil Knight Invitational last weekend in Portland, Ore., where he averaged 9.3 points and 7.7 rebounds. On Monday he was named Big East Freshman of the Week.

“It means a lot to me. It shows that all the hard work I put in over the summer and the last couple months is paying off.”@TheAndyKatz spoke with @UConnMBB’s Donovan Clingan about winning the Phil Knight Invitational Championship and being named Tournament MVP 🏆 pic.twitter.com/HmClePrDpU

NBA scout No. 1: “Donovan Clingan at UConn will be a first-round pick when he comes out. Their best long term prospect, in my opinion. “Donovan is like [Ivica] Zubac [of the Clippers] to me. 7’1” 265 that can protect the rim and offensively finish around the rim. Athleticism isn’t elite but he closes gaps fast and it’s not easy getting around him.” NBA scout No. 2: “Clingan just needs to play. Unfortunately, he is playing behind Adama Sanogo, who is playing as well as any big in college basketball. I’m still a huge fan of Clingan. He has overall basketball skills for a 7-2 player. Scouts need to arrive early and see him in pre-game post/perimeter shooting. He is very skilled for a legitimate 7-2 player. He’ll get better playing in a crowd as time goes on.” Follow Adam Zagoria on Twitter Follow ZAGSBLOGHoops on Instagram And Like ZAGS on Facebook